Julie Jo Severson is ready for something new…she’s just not sure what it is, yet. Read more from Julie Jo on her blog. 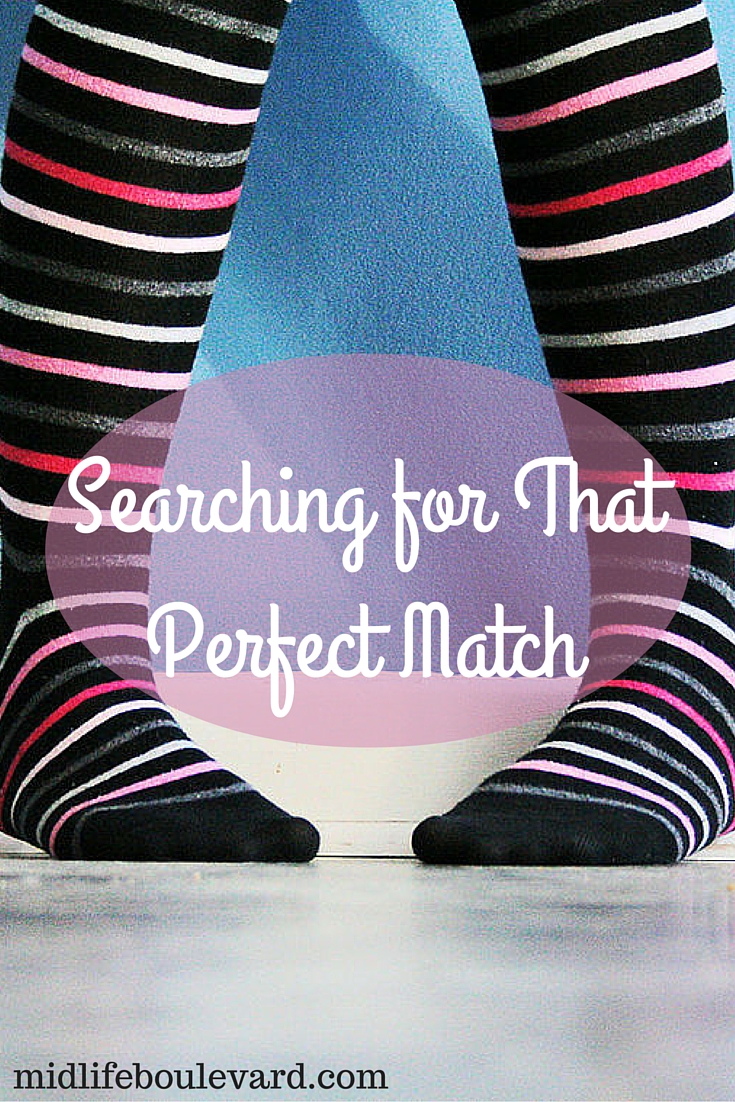 Each fall, I take on the role as matchmaker. I line up a bunch of singles and do my best to pair them up.

I admit, sometimes I bring two together that aren’t perfectly matched. I figure they have enough similarities to make it work.

Still, there are always a few misfits leftover. They’re either too short, too tall, too worn out, or too offbeat to hook up with the others. I don’t mean to be ruthless, but it’s the end of the line for those mavericks. Time to let ‘em go.

First I start with the socks. Then, if I’m really motivated, I move onto Tupperware containers and their lids.

It’s a short-lived nesting episode after kids return to school in a meager attempt to bring order to chaos erupted in closets and drawers and everywhere over the summer.

I don’t enjoy these domestic matchmaking tasks, and there are a gazillion other to-dos, in and out of the house, yipping for my attention. But if I don’t do them, who will? My husband and kids are good for lots of things, but not those things.

There’s another matchmaking task looming in the midst this fall. It’s one that part of me would like to dodge as well. Why? Because it requires me to be completely honest with myself about what I am and what I’m not. It’s time to lay out the array of viable options and start sizing them up to the looming question: What’s next?

Like those socks, I’m a bit of a misfit, too. I’m a woman at midlife with a professional past and a desire for a professional future, but with a whopper of a stay-at-home mom “gap” in between.

Despite efforts to keep skills up-to-date, not to mention all the new bionic multitasking/problem-solving abilities cultivated since becoming a Mom, I still sometimes feel like a Gen-X-er who is stuck in-the-middle.

I’m too old-school to compete with techno savvy Millennials, but too young and apt not to try, too sandwiched between generations (and carpools) to give up flexibility, and too stubborn and chomping-at-the-bit to want to start all over, schmooze, or settle. (Not to mention a tiny bit too scared out of my wits to leave my comfort zone.)

Leaving the traditional workforce all those years ago after having my first child isn’t something I’ll ever regret, but it wasn’t what I’d planned. Back then, I identified most with career-minded women.

I’ll never forget that first morning I returned to my job in a publishing company after a three-month maternity leave, worried sick my baby girl would starve while I was away for the day. I’d waited too long to introduce her to the bottle and when I finally did, she refused it with the stubbornness of an iron-willed calf.

Even when offered the most breast-like bottle on the market by her own doting father (with one of my nursing bras draped over his shoulder to emulate my scent), she’d scrunch up her little nose, turn away, and holler until the real thing(s) came gushing back through that door.

Fortunately, I worked nearby and had a female boss with a sense of humor. Because that tenacious little blue-eyed stinker had me and my postnatal 38Ds galloping to and from work at feeding times ‘til she finally gave into a sippy cup.

But by that time, the paradigm about who, what, and where I wanted to be had already shifted; the debate raging within me quieted to a whisper. I turned in my resignation, packed up my coffee mug, picture frames and Associated Press Stylebook, and went home.

At first, I felt under the microscope in my new role. The occasional, inevitable question from an acquaintance about what I did with myself all day, as though they were imagining me doing nothing but eating bonbons and sorting socks, got under my skin. The glimpse into any mother’s journey too complicated, too messy, too glorious, too profound to express in a lifetime, much less sum up in a one-line response to that harebrained inquiry.

As we know, years are short. My strong-willed first-born, now more pliable, just completed 30 hours of driver’s education, her two younger siblings not far behind. My kids still need me to be fully present, but in different ways, ways that allow me to consider what’s next.

I’m sensing a deep-down shifting inside me again. And I’m trying to figure out what it’s telling me to do.

My resume may have a gap as big as all the holes in the socks I’ve sent to the land of misfits combined. But so far, nobody has said it’s the end of the line for me.

Whatever “next” turns out to be, is it too much to hope that it be family friendly, syncs with all that makes my heart soar, compensates me for ladders already climbed, and values the perspective and breath of experience I now have as mom, teacher, chef, chauffeur, event planner, band-aid finder, memory keeper, story-teller, writer, director of child development, domestic engineer, community volunteer, and classroom pumpkin bowling station manager?

Ummmmmmmmm . . . I don’t know. Maybe? I do know, though, whatever vision I may have for the years ahead isn’t going to be handed to me on a platter. If I don’t do the sometimes tedious tasks of sorting through the gifts I’ve been given and matching them up with my family’s needs, the world’s needs, and where that inner voice is leading me, who will?

Julie Jo Severson, former college newsroom junkie and PR girl, is now mom to a teen, tween, and pretween and writer who doodles about past, present, future clinking glasses and making peace at Carvingsonadesk.com

Do you find yourself suddenly needing to mop the kitchen floor or organize the recycling when your spouse suggests it’s...