Ten years ago, magazine writer Norine Dworkin-McDaniel met Jessica Ziegler, a web designer and illustrator, at a party in Las Vegas. The two bonded over well-made martinis and into-the-wee-hours convos about life, working in media, and whatever they heard on NPR that day. Fast-forward a few years, and Jessica had a kid. Then Norine had a kid. And after they got their footing as moms (somewhat, anyway), they started a blog. These days, Norine lives in Orlando, and Jessica lives in Denver. But together they publish Science of Parenthood, an illustrated humor blog that uses faux math and snarky science to “explain” the mysteries of parenting. As they mark their first year of publishing, they told Midlife Boulevard how it all began. 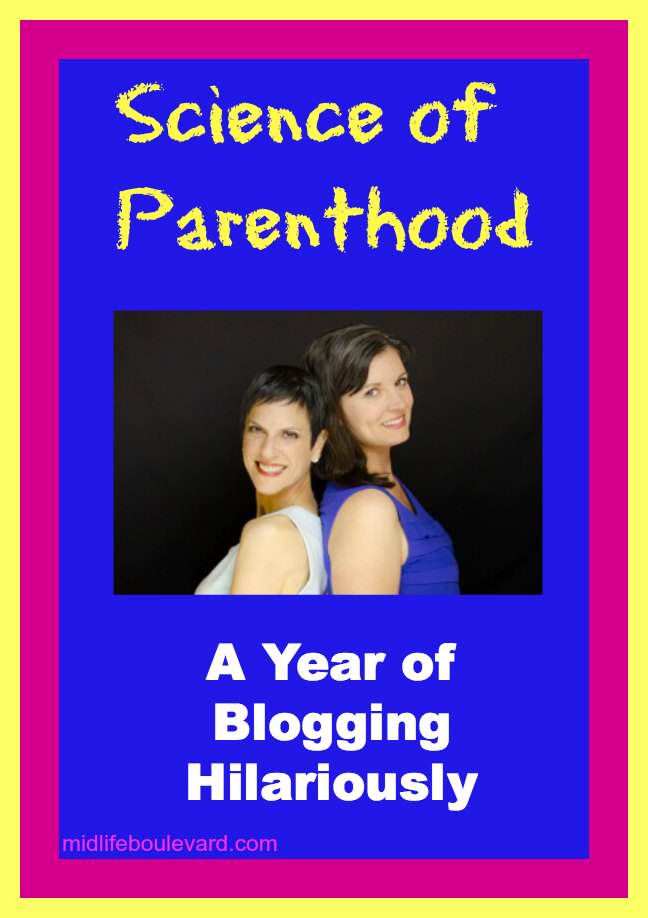 Norine: So I think we’ve told everyone we know — and everyone they all know — that we’re celebrating our one-year anniversary. Or rather our blog’s anniversary. Some days it certainly feels like we’re married, though without all the “benefits” [wink, wink]. So, Jess, when we met, good gawd, a decade ago, did you ever imagine we’d end up blogging together?

Jessica: Not at all! Blogs were barely a thing back then. Plus, we didn’t have kids. What was there to blog about?

Norine: I always say writers have kids so we don’t run out of material. And while Vegas provided plenty of magazine fodder, it’s nothing like the humor trove of parenthood. That’s like inheriting a diamond mine. The gems just keep coming, from the pee-stick through high school. Though, I suppose we owe a debt to Justin Halpern. I’d read his book, Sh*t My Dad Says, which started as a Twitter feed. I thought I might Facebook my way to a book deal with “science-y” quips about parenting.

Jessica: Worth a shot, right? I’d liked your Facebook posts. You hooked me when I started visualizing how the illustrations would look.

Norine: You were thinking BIGGER though.

Jessica: I could see it taking off. Not just as a book, but as a blog, a Facebook page, Twitter, and so on. Working with websites and social media, I knew there was potential for something larger than just one book.

Norine: One thing people always ask is if the blog is based on our kids.

Jessica: To some extent. But it’s really universal. Our kids are school-age (Fletcher’s 7; Holden’s 9), so we’re a little out of the baby game, but we can still remember it with startling clarity when necessary.

Norine: Oy! Fletcher’s nasty bout of diarrhea that inspired Baby Fluids Effusion Rule! That is burned into my memory.

Jessica: Oh gawd, yes. Though now we have a broader range of experience to draw from. Plus the kids can help. When I was writing the Minecraft post for Bonbon Break (where we’re syndicated every Friday!), I asked Holden what kids say when they talk about Minecraft. Then I wrote about what it all actually meant; what kids wished parents would say in response; and what we’d probably say instead.

Norine: And, of course, there wouldn’t be a Science of Parenthood if not for Fletcher. Last year, he’d learned about Newton in school. And when he was telling me that an object at rest stays at rest unless acted on by an external force, I thought, Wow! That is TOTALLY him with video games. I posted on Facebook: A child at rest stays at rest until you unplug the Xbox. That was the beginning. That update ultimately became one of our first illustrations, Newton’s First Law of Parenting.

Jessica: And between picky eating, bedtime hassles, school, friends, homework, vacations, travel, family, our topic list is endless. Some days, we can come up with five to 10 illustration concepts, each.

Norine: One morning, last year, when Jessica was visiting with Holden, we knocked out three months worth of illustration ideas while our boys played together.

Jessica: We get a lot done, even though most of the time Norine is in Florida, and I’m in Colorado.

Norine: That may be WHY our partnership works so well! Absence makes the heart grow fonder. And cuts down on opportunities for chit-chat … and annoying each other.

Jessica: Exactly. We typically work apart, then review together. The reality is, we don’t both need to be involved in everything. Some things we work on together, like this interview. And some things we divide and conquer. For instance, I do web design and development, and Norine does most of the writing.

Norine: Dividing and conquering is key for blogging because so much needs to be done. But ours is still a unique partnership. Not all partners are friends, and not all friends should be partners.

Jessica: I’m kind of surprised how well we work together, too. It’s funny though. In the early days of The New Yorker, this was how cartoons worked: you had a writer and an illustrator. It’s a fairly modern evolution that the illustrator draws and comes up with the ideas.

Norine: I feel compelled to add here that Jess knows a lot about this because her father is the famous New Yorker cartoonist Jack Ziegler. But wow. Since your dad works alone, I had no idea.

Jessica: Nowadays, that’s how it works. But historically, it was a team effort.

Norine: A bit. Especially since I started toying with Science of Parenthood because I was feeling like a dinosaur in publishing. Publishing was changing, had changed. It’s not enough anymore for writers to just write. You need to provide visuals, multi-media, social media. Those weren’t skills I had. It was frightening, feeling like I could be washed up at 46. Science of Parenthood is a real game-changer for me. I’ve always written humor, but working with Jessica, I get to express it in a totally new way. Plus, I’ve learned a lot. As I approach the Big 5-0 — I’ll be 48 in April — our venture has let me start a whole new chapter of my life. We just jumped in, not really knowing all we needed to, or where exactly we would end up.

Jessica: Oh, I’m a big jumper-inner. Figure it out as I go. What’s the worst that can happen?

Norine: Stay tuned to find out!

Norine Dworkin-McDaniel is the co-creator of Science Of Parenthood and serves as its Chief of Scientific Snarkiness. When she is not blogging about the endless mysteries of parenting, she works as a freelance magazine writer. Her work has been published in Parents, More, Health, iVillage, Lifescript, Redbook, American Baby, All You, among others.