“He opened the jar of pickles when no one else could.  He was the only one in the house who wasn’t afraid to go into the basement by himself.  It was understood when it rained, he got the car and brought it around to the door.  When anyone was sick, he went out to get the prescription filled.  He took lots of pictures….but he was never in them.”
— Erma Bombeck

You know that song, “Beautiful Boy” by John Lennon where he sings the line “Life is what happens to you while you’re busy making other plans?”  Well that’s what the first two months of 2012 were like for me.  I was expecting to take a lot of time writing about the fact that I was facing two major landmarks: my two-year anniversary of discovering that I had breast cancer, and my one-year anniversary of my last and final reconstructive surgery.

But then, life happened.  In January, my daughter had a concussion from a snowboarding accident, my mother in law had some worrisome health issues, two of my best friends had pretty scary car accidents, another of my best friends had a health scare and the whole family came down with the very annoying hacking cough/cold that’s been going around.

And then, my dad died.

I took some time before I decided to write about it, because I’m still figuring out how it makes me feel, now that both of my parents are gone.  Do I feel like an orphan?  No, I still feel like they’re around, teaching me life lessons, although perhaps not in the way either of us would have anticipated.

I remember the week they moved out of their last real home in North Carolina, and traveled down to Georgia where they first stayed for about six months in an Assisted Living home, promptly decided it wasn’t for them, and then moved in with my oldest sister (who is a saint for letting them live with her) for the next six years.

The few days before they moved out of their home in North Carolina were busy, with my dad doing his very best to not only cull down all their belonging’s to fit into the two rooms they would have in their new home, but also to responsibly dispose of all the rest of their life’s belongings through donations to various local nonprofit organizations.  As they drove off in their car on the way to Georgia with my oldest sister, I waved goodbye and then turned back to the house in North Carolina, now almost empty of all evidence of their life there.

My dad had done such a good job of getting rid of everything, but as the movers were finishing up with all of their loading, I went out to the garage and my mouth fell open.  The one room in the house that my dad had forgotten about was the garage, and it was full of memories; old Christmas trees and ornaments, his complete and extensive set of metal garden and house tools, my mother’s old walker from before she became bedridden, boxes and boxes of items all neatly labeled and stacked in orderly fashion on the shelves in the garage.

I had a very clear and distinct realization that material things are quite meaningless.  All of my parents possessions had just been reduced to trash and I was about to put the rest of the stuff from the garage out on the front curb, hoping that someone would come by and claim the things that were still useful.

Last month, after the funeral service, my sisters and I went into my Dad’s rooms in my sister’s home.  He had a suite of rooms; a bedroom, sitting room and bathroom.  Everything was very neat and orderly, my dad was very German and very organized.   There were so few things left of his 87 years of life – a few desk drawers of orderly files, a small closet and a chest of drawers with a few well organized and neatly folded clothes, his books and computer, some religious articles, photo albums and pictures of the family on the dressers and bookshelves.

And then I found his ashtray.  A funny thing to bring back such a strong rush of memories.  I took a deep breath as I lifted it and held it to my nose, fully expecting to smell the ashes from the ground-out butts of his old Chesterfield cigarettes, but of course, he’d cleaned it so thoroughly since he’d stopped smoking in the 1970s that there was nothing there but my very strong memories.

I had forgotten about this ashtray, but it’s the one thing he kept after all those years, so it must have held a lot of memories for him, too.  I don’t really know much about it, but he must have gotten it during the Second World War, because it’s from Augsburg, Germany, and is imprinted with “7th Inf. Division and 5th Inf. Regiment.” 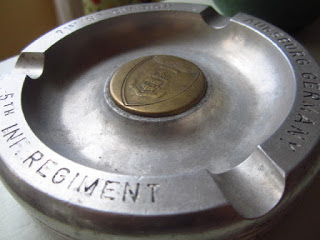 You can see the copper symbol in the center.  That’s where he would stub out his cigarettes and that’s the spot that I can remember had that strong smell, which for some reason I would love to be able to smell again, now, even though I hate cigarette smoke. 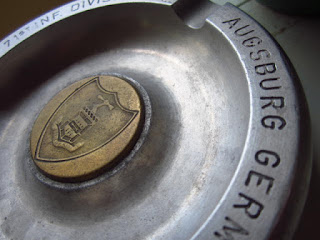 Knowing what we all know now, about how bad cigarette smoking is for you, I really should hate this ashtray, but I have to say, it’s the one thing that makes my dad seem real, that still reminds me of his physical presence.  I’m glad he kept it.

A touching long-form reflection on  father daughter relationships from Adela Crandell Durkee. Read more from Adela on her blog, The Black...