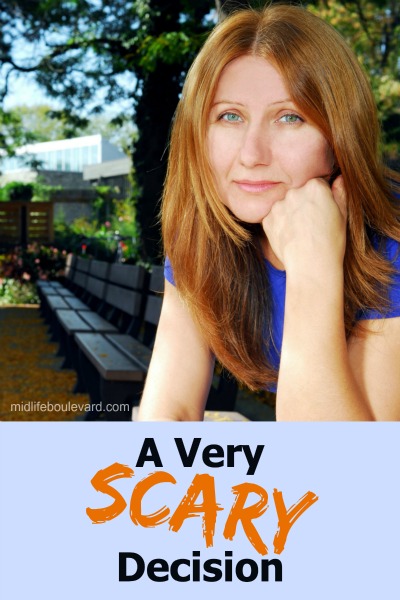 It was a year that was both exciting and scary for me. My divorce was final after 2 years of bitter back and forth, I started a yoga teacher training program, I was on the tail end of having lost 50 pounds and I sold my house and most of my belongings while my son and I moved into a friend’s home. Yes. I sold almost everything I owned and moved into a friend’s house.  It was such a freeing and financially satisfying thing to do, but very scary. And of course, there were a lot of questions, tears and frustrations prior to that moment.

At the time of the divorce, I ended up with the house and the mortgage and an additional 30,000 in debt that paid for my ex’s truck and motorcycle. I had more monthly bills than monthly income and each month I was getting further and further into debt. I couldn’t keep the house and feed my son. I was in danger of losing it and destroying my credit rating, which would keep me from being able to start over. And that’s when a friend suggested I sell everything and move into her house. She was also a single mother of one son and they were living in a 4 bedroom home. While she wasn’t in a financial crisis like I was, someone sharing her expenses would allow her some breathing room.

What do I do? Do I take help from a friend? Or was I supposed to try to do this on my own? Should I find someone to share my house instead? Should I just sell and move into an apartment? Other friends and family voiced their opinions from the ridiculous “Are you a lesbian?” to more valid concerns about how I would feel when I wasn’t in charge of the house anymore. What about all my furniture? Since she already had furniture, would I sell mine or would I store it? How could I save money if I had to store furniture? Would it be difficult to parent my son if she had a differing parenting style? And what did it say about me that I couldn’t make it on my own after the divorce?

Even as I made the decision to sell the house, I hadn’t fully made up my mind on the next step. Scary, indeed. All of it. But when my house sold in a bidding war at the first Open House I needed to make a decision. When I saw that the sale price allowed enough money to pay off all of my debt, but not enough to get another place, I realized that the best decision was to move in with my friend and her son. Not only would she have some extra money, but I would, too.

I started with selling off all of my furniture. I realized that there was nothing I was sentimental about. Then I held a huge tag sale to get rid of the rest, all of the dust collectors I realized I didn’t need anymore. With each sale that day, I could feel a weight being lifted off my back. By the time I moved into her house, there were only a few boxes of items that I couldn’t give up, that I needed to store in her basement.

I cried the morning we moved in. Actually? I sobbed. At that moment, I didn’t know if I’d made the right decision and I think she wasn’t sure either and it was too late to go back. It was awkward for those first couple of months. Who grocery shops? Who cooks? Who cleans? What time does everyone use the bathroom? But eventually we settled into a system that worked for us.

It worked so well, that two years later, when she and her new boyfriend were thinking of buying a different house, they were looking at set ups that would be able to include my son and I. But after two years, I was ready to strike out on my own again and bought a condo. And the funny thing about those boxes that I stored in the basement when I first moved in? When I started going through them, most of the items never made it into my new home, I wondered why I ever felt the need to cling to them in the first place.

What’s the scariest decision you have needed to make about the trajectory of your life?

I’m a post 50 baby boomer, willing to enjoy chocolate, practice some yoga, have some fun and explore new places and new things in my next 50 years. Instagram: unfoldandbegin

I left almost my entire life behind when I left my marriage. It is surprising how little one really needs. I am happy not to have loads of stuff anymore. It is very freeing.

Jennifer - you are a very strong person with a solid backbone. We are very inspired by your story and certainly will be sharing it with The Divorce Community (www.divorceforce.com) as many more will be inspired. All the best to you! Steve from DivorceForce

It's amazing how strong that backbone gets when you're going through it.

Avocados never had it so good. This guacamole is a dream come true. Trust me.  Chocolate Souffle, Easy Peasy Minestrone,...