Libraries are the great American equalizer. Whether you are young or old, rich or poor, atheist or devout, have a PhD or are a high school dropout, your public library welcomes you. They have no choice, as Roz Warren explains in her screamingly funny book, Our Bodies, Our Shelves: A Collection of Library Humor. 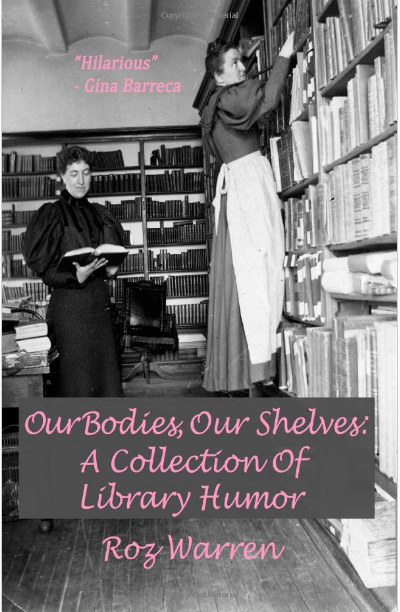 A widely published humorist who writes for the New York Times, Huffington Post, Christian Science Monitor, Jewish Forward and The Funny Times, Warren is the editor of thirteen humor books and a former lawyer (“…because I was tired of making so damn much money.”) But it’s her work at the Bala Cynwyd Library in suburban Philadelphia for over a decade that informs this hysterical collection of stories.

Librarians are regularly lampooned as dour, shushing matrons. Warren glibly dubs herself and her colleagues as “mild mannered librarians.” But, as she points out in her witty essays, librarians aren’t allowed to exhibit any emotion other than politeness. Not even when patrons curse, refuse to pay fines or use cherry-flavored condoms for bookmarks. In this regard, librarians are true civil servants, obligated to remain calm under fire and withhold their anger, disgust and side-splitting laughter until they are behind closed doors.

What can go wrong in a public library? According to Warren, just about everything. The nun who purchased a Barbara Streisand video and showed it to her convent sisters, only to find out it was Swedish porn! The woman who is miffed when the library staff refuses to change her flat tire. The Sports Illustrated Swimsuit issue that always vanishes within 24 hours of being put on the shelf. And the patron who doesn’t see why she should have to pay for a book that was three months overdue. “How could I pay it?” she whined. “I was on vacation in the South of France!”

At this juncture, Warren shares the secret of all public libraries. No matter how much you owe, no matter how many books you take, they can’t come after you. Librarians in orthopedic shoes will not picket your home or place of business. You won’t get hang-up calls at 3 a.m. No one will show up at your door with an arrest warrant. “Go ahead! Check out the entire library and keep it forever! Nothing will happen,” Warren writes.

The funniest chapter, the one that me whooping out loud, was Warren’s discussion of Sexually, I’m More of a Switzerland, a collection of personal ads from The London Review of Books, edited by David Rose. Here’s a sample: “Tax-evading, nervous asthmatic (M, 47) seeks woman not unused to hiding under the kitchen table when the doorbell rings.”

But the real joy of reading Warren’s book comes not from what we learn about libraries, but what we learn about the author. At 60, Warren lays her bare her past as a “hot chick.” The drugs, the sex and a night with an unnamed “famous singer.” Following twenty years of marriage, she’s not merely accepting of her divorce, she’s ecstatic! “Now I’m with a guy who is consistently thrilling, and my ex is happily married to the actual love of his life. I call that a happy ending,” Warren writes.

Amid the humor, Warren shares her values. “I support LGBT rights,” she proclaims and shows her support by wearing a rainbow wristband. “That small splash of color sends a signal: I’m not as dull as you think I am.”

She also shares her colorful vocabulary. All those naughty words she’s forbidden to say in the library, she gives free reign to once she leaves work. I won’t quote her, but suffice it to say, Warren could make a longshoreman blush.

Warren also reveals that she has prosopagnosia, the inability to recognize faces, which results in countless embarrassing incidents. If she bumps into a library patron or a neighbor in an unfamiliar setting, such as at the dry cleaners, she has no idea who they are. Warren remains nonplused. She brightly greets everyone with a cheery “Hello!” and hopes that they will fill in the blank. She writes.“Brad Pitt recently ‘came out’ as being face blind. (Which means that he and I have something in common besides our sexy good looks and charisma.)”

Warren admits that she only gives a book twenty minutes to win her over. After that, it gets reshelved. She feels no pressure to finish a book just because it’s on a best seller list or a classic. Reader, be warned. You’ll be hooked by Our Bodies, Our Shelves way before the twenty minute mark.

This review previously appeared in WomensVoicesForChange.com.

I agree, Anne...this sounds like one to add to my own personal library!

Sold! I need to read this book!

Sold! I need to read this book!