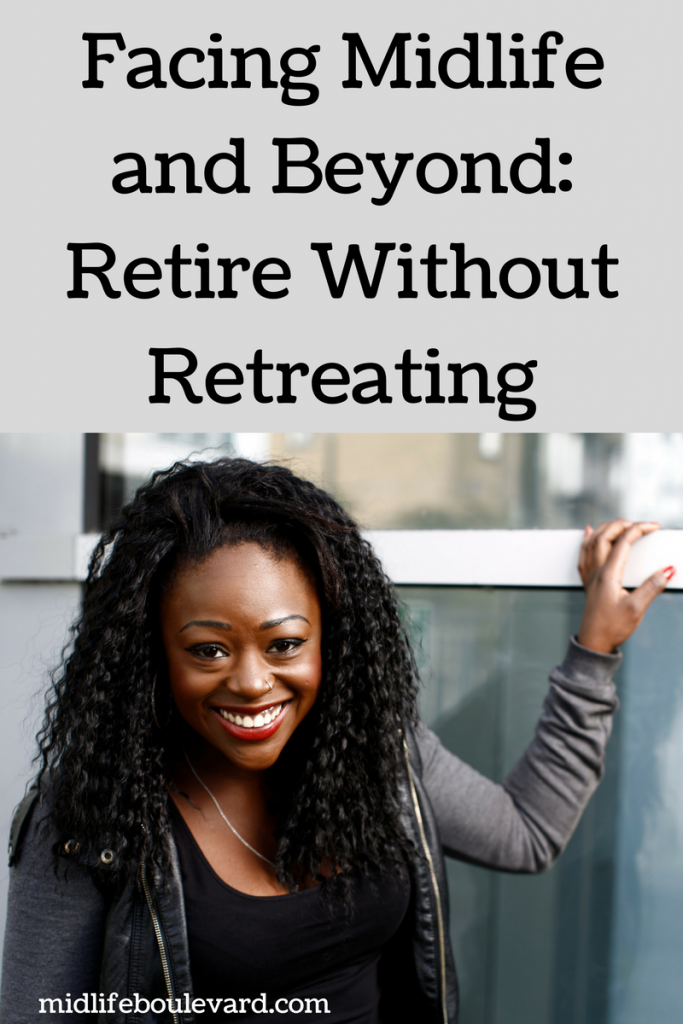 “Are you thinking about retirement?”

That question always catches me by surprise. I don’t think of myself as old enough to retire. Call it denial, but that seems very foreign to me.

If you google the definition of the word retire you’ll find: “Leave one’s job and cease to work, typically when reaching the normal age for leaving employment.”

What’s typical? It depends on the country you live in. If you’re in Luxembourg, 59 seems like a good age. If French, it’s more like 61. And for some reason, it’s slightly different for men and women. Interestingly, Germany was the first country to establish “retirement” back in 1889. Economics certainly play a role – some of us can’t afford to retire. But worldwide, something about hitting 60 or 65 seems to suggest that we all should think about slowing down.

Yet there’s a second definition of the word retire.

“Withdraw to or from a particular place.” For example, “She retired to her room.”

This one scares me a little.

Sure. It’s easier these days to think about not going and doing. My body parts complain a lot more about performing one more sit-up. (Actually, getting up from the floor, after doing said sit-ups, should be considered exercise in my book.) A warm bed is a little harder to crawl out of, and doing “what I’ve always done” may take extra effort.

Emotional withdrawal doesn’t have to be coupled with midlife.

We lost a good friend within the last few months to sudden cardiac death. He was 59. His name was Tim LaTourette, and he was a master furniture maker. He created beautiful works in wood, and spent hours guiding and teaching others. Early this month, we went to an exhibit of his pieces. The work was a stunning display of his creativity and particular way of integrating the natural world into his design.

I was struck by what was unfinished. Within the last year or so, he had begun crafting guitars — a completely new project for him — and there was at least one that was obviously still in a design stage, waiting for Tim’s artistry to mold it into completion.

Tim had not withdrawn from learning, from growing. From sharing what he knew. From caring about creating.

Tim’s death reminds us we don’t have control.

But I hope I’m like him. I hope I leave things unfinished. I hope I don’t withdraw, and allow the number that is my age, or the body aches that I’ve been given, to govern my attitude.

When I’ve seen people retire well, it’s when they’ve planned well. They’ve become interested and engaged in something, other than their prior job. Whether it’s grandparenting, fishing, writing, painting, or learning to make guitars – they fill their time with meaning. And fulfillment.

And if you leave things unfinished?

Retirement isn't even an option for so many people. I hope to have an active retirement, full of writing, blogging, travel, socializing and, hopefully, being a hands-on grandma. My dad taught my daughter about nature and sports. That's my grandparenting role model.

It's wonderful to have such a role model Linda. And you're right. Many people don't have the option - and some never choose the option. Thank you for commenting!

Nice tribute to your friend and a reminder to us.

Until retirement hit, I didn't realized that word was synonymous with death. I stopped....everything. Then I re-planned and rebuilt. I volunteer, take classes, blog, love, work. Now retirement means busier than ever.

Good for you Beth. It sounds like you rebooted, and built another whole life for yourself. Thanks so much.

Shari Broder is a weight loss coach for foodies who care about their health and want to look and feel...