I’ve been a big fan of Melissa McCarthy’s since her days as the adorable Sookie St. James on the purely escapist show Gilmore Girls.

Sookie was a chef with a family and a life and a fantastic best friend, Lorelai Gilmore (Lauren Graham of Parenthood fame). Sookie was the voice of reason during many of Lorelei’s most confusing times. I don’t believe her size was ever the focus of an episode of Gilmore Girls. 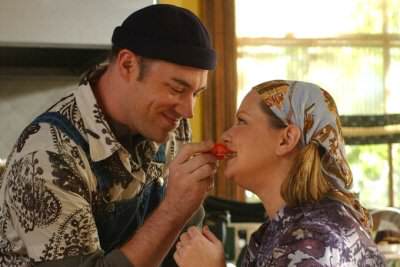 In 2010 McCarthy broke a million different taboos by starring in a series about two obese people who fall in love and have a regular relationship on the show Mike and Molly.

McCarthy was, once again, compelling to watch and totally believable as the character of Molly, who struggled with her weight, tried to keep herself and her fiance’ on a diet, and lived her life, not as the fat girl, but as a single woman who just happens to be fat. Mike and Molly was a great show not because the two stars were plus size, but in spite of it. Had the show been only about fat jokes and chubby chuckles, it wouldn’t have kept my interest that first year – but because the characters were fully formed people and the supporting cast was stellar, I watched it every week.

Then came Bridesmaids. And the Emmy award. And it seems that someone on Melissa McCarthy’s team of advisors decided that the fat, goofy, inappropriate character of Bridesmaids was more interesting – and entertaining – than Molly. As season 2 went on, Molly became more and more annoying, buffoon-ish, and slapstick. I stopped watching. 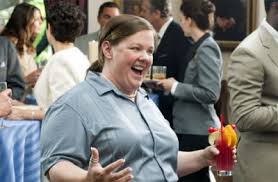 Now in her new film, Tammy (read one review here), she is once again cast as a fat, annoying, slightly disgusting woman. Call me humorless, but I don’t enjoy one-joke films. I didn’t think The Hangover was funny.  I though Bridesmaids was a little better because there was a foundation of reality in the relationship between Maya Rudolph and Kristen Wiig’s characters, but the cringe-worthiness of most of it just wasn’t my thing. I’m not a fan of physical, pratfall comedy at all, and I especially don’t enjoy jokes that are made about ugly people, stupid people, poor people, and especially fat people. It seems that Melissa McCarthy has gone in the direction of all of those jokes in her new film, Tammy – though I can’t be completely sure since I haven’t seen it, nor will I.

Most unbelievable to me is that she and her husband wrote this film especially for her. I suppose capitalizing on what works is to be expected, especially in the fickle and heartless business of entertainment – you have to get while the getting is good. 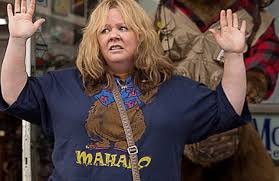 McCarthy in the film Tammy

But please, Melissa McCarthy, please. You are a talented, beautiful, entertaining actress who is compelling to watch and who I want to support. I like it that you’re comfortable with being big, I love that you speak up about the dearth of fashion choices for big women, and I believe you’re way better than klutzy, embarrassing stunts and gross-out jokes. Stop falling back on your size to create your characters and focus on using your talent, which you have so much of.

That talent is why I’m so very much looking forward to the upcoming film McCarthy is in, St. Vincent, also starring Bill Murray, Naomi Watts and Chris O’Dowd (who was also in Bridesmaids). In it she plays a single mom who let’s the down-on-his-luck St Vincent (Murray) watch her  little boy while she’s working. I don’t know much more than that, but from the trailer it looks like, in this film, she’s not the funny fat girl – she’s just a single parent trying to keep it together.

t’s not funny to be fat – it’s just one part of who someone is – and fat people don’t need to be funny to be successful as actors. I hope Melissa McCarthy will find more roles to showcase her acting talent, no matter what size she is.

This is spot on. I was super sad when I saw the trailer. She is hysterical and has the "it" that is so difficult to find. This role looks beneath her dignity. But we are all on a journey and I hope she finds gentle feedback like your post to get her back on the right track.

Couldn't agree more especially the part about Mike and Molly. That show was one of my favorites. In addition to McCarthy it has a wonderful and funny supporting cast (love Mike's mother). But then it became about Molly and her crazy alter-ego (the slapstick Melissa McCarthy) and it took a nose dive. I hope they regroup and bring that show back.

As for the Tammy movie...well, as you can imagine, I wasn't thrilled that they chose my name for the title character, given how it was portrayed in the trailers. I wanted to see it because it was my name but agree, I will wait until it comes to Redbox.

You might want to give Tammy a try--it's not really about her size, it's about how, even though she makes bad choices, she's still a good person who deserves a chance to be happy. It doesn't focus on her weight very much at all. And she ends up with a good guy in the end.

I agree with you that she needs to focus more on her abundant acting skills than on the current schtick she's got going on, though.

I may watch it on demand, but I won't make a trip to a theater to see it. Thanks for letting me know though - I'm glad they don't focus on her weight.

I like her and she's a wonderful actress but like you I wish she would make better choices.

I agree. I saw a clip with a horrible wig on Susan Sarandon and thought it was a site gag kind of movie. Physical humor and potty humor aren't my thing so although I saw Bridesmaids I like the movie with Sandra Bullock, Heat, better. This new movie, I do enjoy Bill Murray.

Hot Coffee on the Boulevard – the Best of the Internet