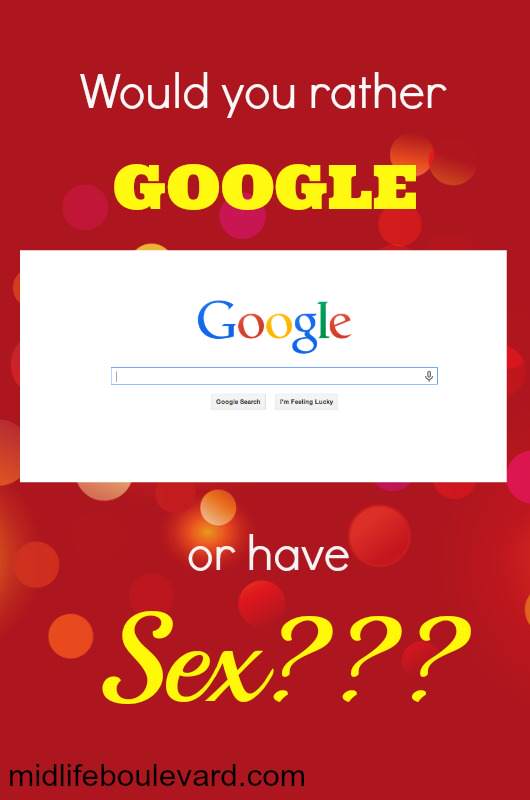 It was 10 o’clock p.m. on a Friday night. The kids were actually asleep. Theoretically Henry and I could’ve been rocking the sheets. Here’s what we were doing instead:

I was in the outdoor office trolling through Facebook, clicking on links which led to videos, which somehow led to Catherine Dukes-of-Hazard Bach’s website, which led me to her online store where I contemplated whether or not I should buy a pair of her Daisy Duke cut-off shorts, which led me to her bio where I read that her husband committed suicide, which led me to TMZ to find out why, but no one really has an answer so I decided to lighten my mood by seeing what Tom Wopat’s been up to since DOH, which made me realize that old bastard’s been working his ass off in Hollywood while a fuller-figured Catherine Bach’s been seemingly sent out to pasture, which led me to google “Aging Women In Hollywood,” which led to a HuffPo article about women aging out of the business and then I clicked to …

Meanwhile, on the opposite side of the house Henry sat channel-surfing the military channel by battles; Verdun, the Battle of the Barbarossa, Iwo Jima with an occasional sidetrack to The O Network, which instantly withers his testicles into tiny fragile little champagne grapes. (Deny it all you want, I know you watch Oprah’s Master Class, Henry. I know you do!!)

Does any of this sound familiar to you?

Now, with so many apparatuses out there to keep us continually distracted, there is a direct impact on our sex lives. Since I began blogging I’ve found that I can work around the clock if I don’t set any parameters for myself and I’m certain I haven’t been as attentive to my husband’s needs as I should be.  The fact is it’s much easier to engage in online relationships because they don’t require the full attention, focus and energy it takes to maintain an intimate relationship with a partner.

I’ve made a plan for curtailing my constant internet use. Not after 8 p.m. And no more than two hours weekend days. I don’t want my life online to ever become more vital and interesting than my actual life. I’d love to know how you manage your time online and also how you keep your sex life vibrant? (Besides finding sexual partners on Craig’s List, you minxes).

Hello, my name is Julie, and I am an online addict. Time spent online has recently become an issue in my own mind. I feel it is an addiction I must manage or else stop cold turkey. I cannot conceive of NOT being online, so must set my own parameters. Not easy, as most of you know. For me, it is especially difficult now that I am in a new relationship. My new love is not addicted to social internet connections, nor does he have online friends and groups and such. He uses the internet as a tool. Not so for me. I also use the internet as a way of connecting with individuals and - heck - the WORLD! So now, while at his place for two days at a time, I frequently find myself fighting the urge to check out what is happening online. I acknowledge such behavior is akin to an addiction. I also recognize it is not beneficial to this new relationship, which I really treasure and want to build upon. After reading your post, I no longer feel alone. I think we all must find a way to prioritize what is important in our lives, but now feel I am in very good company. Indeed. Now, what was that last link I wanted to follow?

Can we melt the chocolate we win using the vibrators we win? And do the two winners have to pair up with each other? I'm just trying to establish the parameters. I may have to Google the possibilities. During the weekend. At night.

We had an oopsie. The giveaway is next week!

I was thinking of melting the chocolate with vibrators. Great minds think alike.

Unfortunately, as a single dad, my sex life has been virtual. Four years post-divorce, the kids are now at ages (9 & 10) where they are more independent and not showing attachment anxiety anymore. I hope to move out into the actual meat-and-vegetable world for some real bits and bites, instead of only having a little time after they went to bed for some digital bits and bytes...

Is this the John I think it is?? Dreaming of Vermont.

My hubby gets off work at 8 every night so that's when we put an end to online usage. We also do not answer text or cell calls after 9 unless its a kid. We don't see each other much due to his work schedule so we try to spend as much time together alone without interruptions.

That's great Lynne, this behavior really snuck up on me and seemed to get worse and worse until I finally took notice. I was coming to bed a full two hours later than my husband. I actually began to miss him even though we live together.

Did you know that the Super Bowl is the second largest food holiday in the good old US of A,...