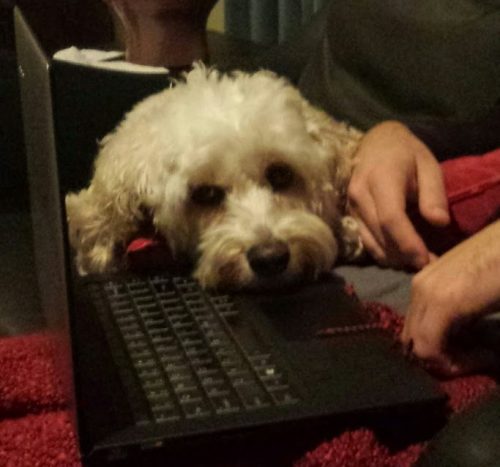 When you’re a digital nomad, this can happen.

People who have more than one child often remark how different their offspring are from each other. We appear to have raised one traditional person — and a digital nomad.

I  saw both our sons emerge from my body, three and a half years apart. Nevertheless, sometimes I wonder if they had a fool proof baby identification system during the 1980’s in the nursery of the Hospital of the University of Pennsylvania.

Our older son is married, has what one would call a “real” job, and is pursuing a Masters degree in Organizational Dynamics.

Our younger son, the one who climbed out of his crib at 11 months old, just bought a condo in Mexico City. This year, he also spent extended periods of time in Thailand, Malaysia, and Singapore, not to mention a few trips to the United States. In fact, as I write this, I believe he is in Las Vegas, or near Las Vegas, or somewhere. If you inquire as to his occupation, he’ll tell you he’s a digital nomad.

Our son’s college major was exercise physiology, so I’m not sure I could have predicted the “digital” part of his job description. However, there were signs foreshadowing the “nomad” part.

When our son was a high school student, he rejected my advice that it was very helpful to learn a foreign language, especially Spanish. He did the least amount possible to earn Bs in Spanish classes and made no effort to approximate the accent of any Spanish-speaking country. Consequently, he was pretty much a mono-linguist when we delivered him to his climate-based college choice – the University of Miami.

I soon started receiving calls from him inquiring about the family dog, and by the way, “What’s the pluperfect subjunctive of the verb estar?” This helped me not be stunned when he chose to spend a sophomore semester studying in Barcelona, Spain. When he subsequently floated the idea of spending a summer taking an intensive Spanish course in Argentina, he met my incredulous look with body language that said, “Whaaat?” and the pronouncement, “I’m a citizen of the world.”

Still, I admit to some surprise when he chose to spend his junior year spring break in 2009 traveling with me in Spain, rather than joining his friends in Cancun.

Traveling with a Future Digital Nomad

Arriving separately at the sprawling Madrid airport, we managed to find each other and rent a car. I was relieved when he agreed to be the designated driver, even when I learned that the only thing he dislikes more than driving is the thought of me driving. We set out on our best behaviors, with a GPS unit, a detailed road atlas, and Google Earth.

With memories of our son’s not-so-long-ago contrarian teenage phase, I was silently pleased to realize that, in addition to my passion for Spanish, he also inherited my wanderlust and fascination with history. We marveled at the Roman aqueduct in Segovia and walked the preserved medieval city walls of Avila.

We were enchanted by the glow of sunset on the cathedral in Salamanca, and the view of Toledo from across the Tagus River, still so similar to the one captured on canvas by El Greco in 1597. Sunset Glow on the Cathedral of Salamanca, Spain

In Toledo, we were drawn to the Sephardic Museum, dedicated to the history of the Jews expelled from Spain in 1492 by the Inquisition of Ferdinand and Isabella. Yes, there was a dark side to the “enlightened” monarchs who sponsored the voyages of Christopher Columbus.

Our son’s last name, Albelda, is of Sephardic origin. His Bulgaria-born great-grandmother, who lived to be 97, spoke Ladino, the Spanish of 1492, nurtured through the Diaspora and the centuries by the Sephardim (Spanish Jews).

The Sephardic Museum in Toledo adjoins the Sinagoga del Transito, the exquisite restored synagogue built by Moorish (Islamic) craftsmen in the 14th century.

We explored the synagogue together, but by mutual agreement and in the interest of familial harmony, we toured the museum’s exhibits separately. I found my son waiting for me in the museum’s bookstore, perusing a book about Sephardic surnames. I felt a shiver when the book informed us that the name inherited by my self-proclaimed citizen of the world, means citizen. I suppose I shouldn’t be surprised he grew up to be a digital nomad. My “Citizen of the World” and future digital nomad at the Tagus River Gorge, Toledo, Spain

Have you traveled with older teen or young adult offspring or other close relatives? If so, how’d it go?

It always amazes me how different sibling can turn out. My sister and I could not be more different. Some things are just inherently more prominent in certain individuals. Sounds like your son is living the life that is perfect for him. It's wonderful that you share the joy of travel.

I love traveling with my adult kids. They are both well-traveled in their own right, but I just get a kick out of taking a back seat to see how they navigate the world. This sort of observation is much more vivid when on the road!

We always placed an emphasis on travel when the kids were growing up, and they certainly took advantage of many travel opportunities. Now as they settle into adult life, they realize the value of learning from other cultures, but as different as the might be, neither will ever be digital nomads. WE do love to travel together as a family and hope that never changes. I'm sure once both have started families, things will be different, but for now we are still the traveling Griswalds.

Like you, I have one wanderluster and one stay-at-home (for now). I've had many happy trips visiting my daughter, first in the Middle East and now in New Zealand. Who knows where it'll be in the future!

I always figured that it's very important for my kids to travel. All four spend a year abroad after their high school, three of them in third world countries. It was and is a rock which built to their foundation of being confident adults. Traveling together with them when they were adolescent wasn't much joy ...