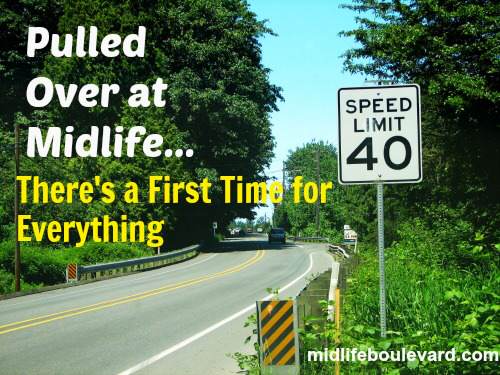 I slowed my car to allow the officer, no doubt hot on the trail of some nefarious ne’er-do-well, to pass. At the ripe old age of 40-something, I had never been issued a moving violation, or even pulled over for a warning, so it didn’t occur to me that the officer might be signaling moi. I stuck my arm out the window and waved him on.

Panic and dread set in as a siren now accompanied the lights, and the cruiser pulled in behind me. This can’t be happening. There must be some mistake.

Now don’t get me wrong. I don’t claim to be a perfect driver. Indeed, I’ve made my share of illegal U-turns, “California stops,” and sped through my share of yellow — Oh-shit-it-turned-red! — lights. But at the ripe old age of 40-something, I felt secure in the knowledge that I was blessed with a sixth sense about when to test these liberal interpretations of the vehicle code.

What could be wrong? My late model Nissan could not have a burned out tail light. Oh gawd! Did I run that last stop light? Was it green when I approached, or yellow? I couldn’t remember. My face was on fire. I felt faint.

This was my maiden cop stop. My first hoedown with the heat. I didn’t want to blow it, but I had no clue as to the proper etiquette. They didn’t teach that in driver’s ed.

As the burly uniform approached my car, I reminded myself to smile.  Address him by name, I thought. Then I glanced at his badge. Lukasiewicz? Seriously?

“Fifty-seven? That’s impossible. I never go more than five miles above the posted limit,” I wanted to protest. But instead I rambled. “I’m on my way to my daughter’s apartment…uh, in Pleasanton…uh, to take her some left over spaghetti.” I snapped up the translucent blue plastic bowl from the passenger seat for supportive evidence.

I popped open the glove compartment, tossed a Manilow’s Greatest Hits CD case and a maxi pad in a bright pink wrapper on the floor before retrieving the requested document.  My license — the temporary one you get before the permanent one with the hideous picture arrives — stuck in the little window slot in my wallet. I wedged my fingernail in to free it, then handed the papers through the window.

Unfolding the license, Officer Lukawhatsizname asked, “Do you have the one with your photo on it?”

“No, I just got married and changed my name. See?” I said, wiggling the fingers on my left hand in front of my face to display my wedding ring.

“Calm down,” he said, now chuckling. “I believe you.” Careful Joe, I thought, your emotions are showing.

“I know, I know,” I replied. Oh great. Admit that you are aware of the posted limit after he’s already told you were exceeding it by 17 m.p.h.

Crap. At that moment the weight of resignation began to set in. I realized I had run out of excuses. Your day has come, girl, I told myself. Bite the bullet. Time to admit defeat.

Then it dawned on me. I had one more trick up my sleeve. It was worth a shot.

“I should know better,” I said, tilting my head and fluttering my eyelashes. “After all I work for the sheriff’s department in the next county.”

“Really?” he said, raising an eyebrow. “What division?”

Trying to trip me up, eh? An imposter wouldn’t be able to answer that.

“Dispatch,” I said, without hesitation. “I work for Mark Barrett. You know him?”

“I’ve heard the name,” he replied, pocketing his citation pad.

He looked over my papers one last time then handed them back to me. “Take it a little slower today,” he said. “And drive safely.”

“I will, Officer. And thanks,” I replied, flashing one last smile, then rolling up the window.

I heaved a sigh of relief as he returned to his patrol car. Then just in case he was watching, I summoned my long buried driver’s ed training and checked all mirrors, looked down the road in both directions, clicked on my turn signal, then eased my vehicle back onto the roadway.

Later that day I replayed the incident in my head and reflected. I had moved one step closer to becoming nothing more than a cruising commoner. After all, I could no longer claim that I had never been pulled over for speeding. But the important thing to remember was that, despite humiliating myself, I still had bragging rights for my perfect driving record.

Read more from Camille DeFer Thompson on her blog

A little bit of tooth whitener never hurt anybody. I hope you are in the car with next the next time I get pulled over. Yea, I said "next time." Thanks for a good laugh!

Hilarious! Wish I worked for the sheriff's department. Could have saved myself a lot of money....

11 Christmas Crafts That You Can Do!

If you're looking for something to help you get in the Christmas spirit, or you'd like to share a project...