When I was young and my friends asked what my father  did for a living, I’d say, “He’s a psychoanalyst.” 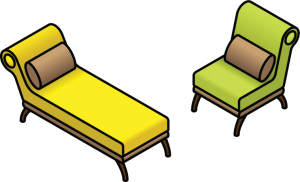 “What’s that?” everyone asked.

I  wasn’t all that sure myself. I knew that folks paid Dad to listen to them talk and that this helped them solve their problems. It could take years. It used up lots of Kleenex. At times, a couch was involved. Even as I told them about it, it seemed rather far-fetched. Unlike my friends, I never once got to see my father at work.

Dad had a home office. When  patients arrived at the front door,  I had to hide from them —  meeting the therapist‘s family was considered bad for therapy. When the doorbell rang, I scurried from sight, fleeing up the stairs or lurking behind a closed door. I waited, silent, as my father welcomed the patient and walked them down the hallway to his office. Then I had fifty minutes before I had to hide again.

If I wanted to invite a friend over, I couldn’t just tell her to turn up. I had to consult the schedule posted by the phone to make sure she wouldn’t encounter one of Dad’s patients chain-smoking on the porch while gathering the courage to ring the bell, or emerging from the house after a session, often in tears.

Although I never met any of them face to face, I  learned something about Dad’s patients when he told Mom about the day’s sessions at the dinner table. (He was far less interested in my life — I always  suspected that if there were ever a popularity contest between Dad’s patients and his daughter, I’d lose.)

He never referred to patients by name so as to guard their privacy, but I came to know the regulars. The brilliant but paranoid lawyer who burned through many marriages. The anorexic teen figure skater who threatened suicide whenever Dad attempted to schedule a family vacation. The Oedipal anesthesiologist.  And my favorite,  the vice squad cop who fell madly in love with a man he’d arrested in a public rest room.

You never knew what they’d do next.  Often, despite my father’s  best efforts, it was something stupid or self-destructive.  But my father was good at his job and slowly, most made progress. Not that progress was easily measured. Other fathers could win a court case or rewire a house. Mine helped a gay cop come to terms with the fact that he was indeed a gay cop.

When a patient made a breakthrough, Dad was pleased. But his pleasure was quiet. He wasn’t an effusive man. I envied my friends whose fathers hugged them and called them “Princess,“ the girls whose daddies adored them. My father wasn’t adoring.  There was nobody better if you had to talk though a problem.  But if you wanted a father whose face lit up at your approach — well, that wasn‘t my Dad.

When he died four years ago, many patients and former patients turned up at the memorial service. Each stood up and told us how grateful they were for how he‘d transformed their lives. “He was a wise man.” “He saved my life.” “I owe him everything.“  My father made people’s lives better.  How many of us can say that?

Now I’m in therapy. I talk about my problems, many of which arise from my relationship with my unadoring Dad. I’m grateful to my own therapist for helping transform my life. I use up lots of  Kleenex. And I wonder how my shrink refers to me at the dinner table. The unassertive radical feminist? The bankruptcy lawyer with the broke boyfriend?

Perhaps she just thinks of me as the psychoanalyst’s daughter.  After a certain amount of therapy,  I’m fine with that.

This essay first appeared on Womensvoicesforchange.com

Great piece and another example of the shoemaker's children not having any shoes.

I guess I was fortunate that my mother didn't become a psychotherapist until I was grown. She was actually quite helpful to me and still is.

Everyone I know who had a psychologist for a parent says they were not nurturing. I would imagine one would feel pretty emotionally exhausted after a day of listening to everyone's problems.

I also have an "unadoring" father, mostly due to his alcoholism and depression. Luckily, my husband is a psychology major, so he has been my therapist all these years! Thanks for sharing.

Wow, that's pretty interesting and gives me a new view of things. Often, when I leave memorial services, I comment on how consistent someone's life is...that the stories I hear are of the same person I knew. But you know, maybe that's not always true.