While reading an article about the so-called “Princeton-Mom”, I felt my blood pressure soaring and steam coming out of my ears. The Princeton-Mom, Susan Patton, has entered the fantasy world of the 1950s with her recent article in the Wall Street Journal, Susan Patton: A Little Valentine’s Day Straight Talk. The Atlantic replied to the article with Princeton-Mom VS the FACTS by Lisa Heffernan. The Princeton Mom may be correct that relationships are a key factor in women’s lives (for men, too), but marriage is one of the major stressors in a woman’s life, even more than having and raising children. Advising young women that men who are well-educated prefer younger, less educated women is nothing short of infuriating. 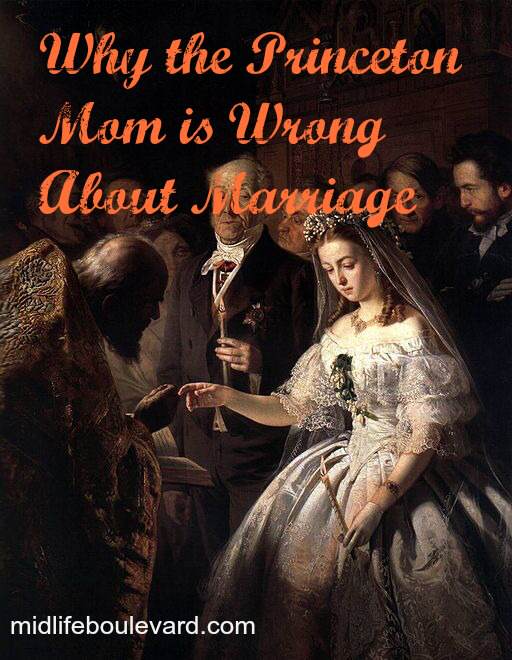 According to Princeton-mom, waiting until your late twenties or early thirties will leave you fewer good picks. Wow. I guess these smart, college educated women should make sure they catch a decent man early on so they don’t get stuck with the leftovers. That makes little sense when you consider that the average college educated male gets married at 28. Besides, marriage is not as appealing now as it once was. Want some empirical evidence? 72% of adults were married in 1970, but only 48% of adults are married now. Marital happiness has been declining for both men and women, and the American divorce rate is still very high. More and more people are asking, why should I get married? Well, that’s a pretty good question, especially for women.

Huffington Post Blogger Vicki Larson wrote a great blog last year called “Why Men and Women Don’t Have the Same Marriage”.   In it, she cites the work of sociologists Karyn Loscocco and Susan Walzer who wrote Gender and the Culture of Heterosexual Marriage in the United States.  I highly recommend reading both.  To quote Vicki Larson:

“…….They cite studies pointing out that: Women are less happy in their marriages than men.

As a former university lecturer on Gender Studies, I can tell you that the history of marriage in a male dominated society is about control (yes, we still live in a male dominated society.)  Marriage was a contract between two men:  father and groom-to-be. The ownership of a woman’s sexuality was passed from father to future husband, usually along with money (or sheep or cows) to sweeten the deal for the future husband. Women had value as virgins, were contracted to have their husband’s children, be virtuous wives, and of course, a married woman must submit to her husband’s desires: there was no such thing as rape in marriage.  The woman left behind any claim to self-hood as she changed her name, changed her home, and instead of submission to father, she submitted to husband.

Hey, I could go on forever. Gender was my field of interest for my graduate work. Our society perpetuates the romantic ideal of marriage, the prince and princess fairytale wedding and the happily ever after.  We never see the princess and prince actually living a married life – what we see is the beautiful, romantic love story followed by the wedding.  (Weddings are big business, approximately 50 BILLION dollars a year in America.  Quite mind boggling, isn’t it?) Telling our young college women to hurry up and get a college educated hubby is fairytale worthy.

So, with all of the studies telling us that women are not as happy as men in their marriages, why is Princeton-Mom advising college educated women to find a man in college? She also encourages young women to stay in touch with the smart guys, as they will be in more demand and bigger wage earners.  Of course, this assumes that college educated women can’t or don’t want to earn a living on their own. Ah, the good old 1950’s “good provider” model of marriage seems to be the kind of marriage the Princeton-Mom is thinking about. But, this is 2014, not 1950.  Women have more options than ever before, so it is a disservice to advise them to look for the MRS degree in college, or for that matter, at all.  Women do not have to marry, to be in committed relationships, or to have children to be happy, and they don’t have to change their names. Why should a woman change her name? It is an archaic artifact of patriarchal marriage, where changing the last name denoted ownership of the female.  Men could change their names just as easily. So instead of blindly following tradition, women and men can make their own decisions after considering all of the facts.

The article in The Atlantic points out that several studies show that married men reap the most benefits from marriage: they are less likely to be ill, have less depression, enjoy a higher standard of living, and men with more educated wives actually live longer! I think Princeton mom is targeting the wrong group. She should be advising young college men to look for well-educated women to marry instead of the other way around. Anyone advocating the 1950s advice that the Princeton Mom is espousing is doing a great disservice to our young people, both women and men. Come into the post-modern world and see the possibilities open to all! If you don’t like it, just keep your head in the sand.

Read more from Tam Warner Minton on her blog, Travels with Tam

This ghostly image of my grandparents, my mom and her little brother recently appeared in my life. The double exposed...