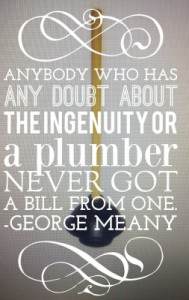 As happens often in our house, the pipes get clogged with my hair. It is thick, curly, coarse and determined to slip into the drain no matter how hard I try to catch every single strand. For this reason, while some women may have their manicurist or hormone specialist on speed dial, I have my plumber.

At least once every season, Mike, my smell-good friend, makes a visit to our house. He arrives with a smile, his handy tool kit, and his very long, very functional snake. For the record, Mike (whose name is usually Bob or Ted) doesn’t show any butt crack as he works. But he does show a lot of compassion and understanding. Probably because I’m putting his kids through college. But whatever the reason, he never says “What’s wrong with you?” Or “It happened again.” Unlike my husband who gets totally annoyed and frustrated with this constant doling out of money for something he thinks can be avoided.

So, this last time he decided to take matters into his own hands, or I should add, his own snake. While he worked, I retreated to the peace and quiet of my office. Not that it was all that peaceful. Every few hours or so, I heard all those words that his mother had washed away with soap so many years ago, peppered with my name. My hot flashes escalated in direct correlation to the frequency of his outbursts.

When I emerged, the plumbing was no closer to being fixed than I was to having thin, straight, non-clogging drain hair. What I don’t get is why he thought he could fix it in the first place. If I had a massive toothache, would I ask my husband to probe around my mouth to remedy the situation? Of course not. Because he’s not a dentist. Would I expect him to remove the age spots from my hands. Never. He’s not a dermatologist. Would I ask him for legal advice. No. Because he’s not an attorney. I listened to him rant and rave for two weeks. Two entire weeks! Through two bottles of vodka, hours of phone conversations with my friends and fourteen nights of tossing off the blankets, only to pull them up to my chin seconds later. He finally gave up and gave in to the fact that maybe he didn’t know how to fix this particular problem.

A few hundred dollars later, the pipes were free of hair and other debris. Now if I could just clear my husband’s brain of this idea that he can fix it the next time it happens. Because I can’t promise him it won’t happen again. In fact, I’m pretty sure it will.

Life is too short to worry about catching every single hair before it goes down the drain.

I’d rather catch the moments and weave them into days of love and laughter.

Read more from Janie Emaus on her blog

Janie Emaus is the author of the time travel romance, <a href="http://www.amazon.com/Before-After-Splintered-Category-Romance-ebook/dp/B00DFCWYVS/ref=sr_1_1?ie=UTF8&qid=1385426831&sr=8-1&keywords=janie+emaus">Before the After</a>, and the young adult novel, <a href="http://www.amazon.com/Mercury-Retro-Love-Janie-Emaus/dp/1622370031/ref=sr_1_1?ie=UTF8&qid=1385426760&sr=8-1&keywords=mercury+in+retro+love">Mercury in Retro Love</a>. She has an essay in the Best Selling humor anthology, <a href="http://www.amazon.com/Lipstick-Teeth-Things-Friends-Powder-ebook/dp/B00EA7ZNHO/ref=pd_sim_sbs_kstore_4">You Have Lipstick On Your Teeth</a>. She is a staff writer at In The Powder Room. She is proud to be named a <a href="http://www.blogher.com/announcing-voices-year-13-community-keynote-honorees-and-readers">2013 BlogHer Voice of the Year </a>. Janie believes that when the world is falling apart, we're just one laugh away from putting it together again. To learn more about Janie visit her blog www.theboomerrants.com and her website <a href="http://www.JanieEmaus.com">Janie Emaus</a>. You can connect with her on Facebook and Twitter @Janie5010.

Janie Emaus is the author of the time travel romance, Before the After, and the young adult novel, Mercury in Retro Love. She has an essay in the Best Selling humor anthology, You Have Lipstick On Your Teeth. She is a staff writer at In The Powder Room. She is proud to be named a 2013 BlogHer Voice of the Year . Janie believes that when the world is falling apart, we're just one laugh away from putting it together again. To learn more about Janie visit her blog www.theboomerrants.com and her website Janie Emaus. You can connect with her on Facebook and Twitter @Janie5010.

I'm married to a guy who holds the title for Least Handy Guy in North America. He sighs when we have to call in Dave (the electrician), Richard (the general contractor), or Antonio (the plumber)...but he does it without complaint. ~K.

Without complaining it good. Thanks for stopping by.

I, too am a hair strand collector. Fortunately my hubs is super handy and can fix most anything. And cursing is usually involved.

Gotta love that cursing! For all the hair I lose, five more grow in.

Ha! My husband knows better, and by his own admission. He likes to tell people that if you open his toolbox you'll find the yellow pages in there!

LOL! First thing I read this morning. Thanks for making me smile.

I love this post, Janie! My husband is the same way---thinks he can save money by trying to fix everything that breaks. He usually ends up making a bigger mess. Thank God I have a teenager who has a fix-it kind of mind and can now repair most things for us.

Thanks, Marcia. Can I borrow your teenager?

Boy I can relate. I mean to the hair down the drain. My hair is long and it lands all over the sink. I've found that good ole Drano actually works great. (And it's a lot cheaper than a plumber.)

Drano and I are old friends!