Before you plan your visit to Cuenca, Ecuador, a UNESCO World Heritage site, be warned that quite a few people who set out to “visit” Cuenca end up moving there. 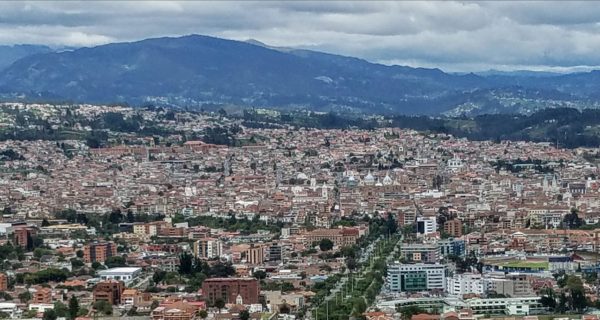 The city of Cuenca viewed from the Turi overlook (Mirador de Cuenca). The city’s iconic landmark, the domes of the New Cathedral in the historic city center, are visible in the center of the photo. From this vantage point, it’s possible to see that Cuenca is built in an Andean valley bowl.

According to US News and World Report, by 2015, 12,000 expats made Cuenca their home, the majority from the United States. They are drawn by the discovery that the people, the climate, cost of living, and decent health care make it an attractive place to live on a first world retirement income.

During our visit to Cuenca, we met one couple from Seattle who could no longer afford their retirement there, but were happily renting a 3 bedroom condo in a Cuenca high rise with all mod cons for $450.00 per month.

With an urban population of approximately 400,000 (2015), Cuenca is Ecuador’s third largest city. It is approximately 300 miles (473 kms) south of Quito, Ecuador’s capital city.

From the capital of Ecuador, Quito, it is an 8 to 10 hour bus ride through the Andes to Cuenca or an easy 40 minute plane ride. (Well, it’s easy if TAME Airlines doesn’t cancel your flight.)

Like Quito, Cuenca is in the majestic Andes Mountains. At an altitude of approximately 8,400 feet, Cuenca is almost 1,000 feet lower in altitude than Quito.

We live on a coastal plain in Philadelphia, Pennsylvania. I tolerated the altitude in Cuenca when I was walking on level ground, but any kind of incline or stairs had me huffing and puffing.

Where We Stayed in Cuenca, Hotel Casa Ordoñez

At the advice of another travel blogger friend, Mike Hinshaw, the Nomadic Texan, we booked a room at the Hotel Casa Ordoñez. Mike told me he stayed there twice as he and his wife are  considering a move to Cuenca. (There’s a definite pattern here).

Casa Ordoñez is a short taxi ride from the small Cuenca Airport, costing us all of $1.80. The house has been in the Ordoñez family since 1906.

After living in the United States for many years, including a stint in the U.S. Navy, Alberto Ordoñez currently runs the hotel. He received an award from the local historical commission for a restoration that is true to the Spanish colonial style.

Forty-seven dollars per night provided us with a large, clean, comfortable room with an ensuite bathroom, a flat screen TV with English language stations, good wifi, and a cooked two course breakfast each morning in the covered courtyard. The style is old world. A common living room/library is located on the second floor.

Alberto is a font of information about Cuenca and helped us plan our three day visit there. Although he indulged my desire to practice speaking Spanish, in fact, his English is perfectly fluent.

A Plan for Your Visit to Cuenca, Ecuador

Start your day at Parque Calderón, the attractive central plaza in historic Cuenca. As is the case in many South American cities, this is where the Spanish city started in 1557 when the Spanish conquered the Inca settlement of Tomebamba. The Inca had taken control of the area only in the 1470’s after many years of fighting the indigenous Cañari people who are thought to have settled in the area in about 500 A.D. 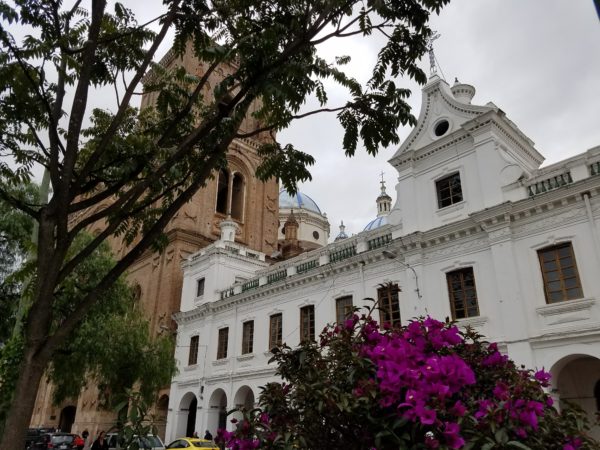 A corner of Parque Calderon in Cuenca, Ecuador.

I think it is safe to say that “free” walking tours are now a “thing” in many world cities. The premise is that you show up at a specified place and time, are taken on a group walking tour of several hours, and then you pay what you want to at the end.

We opted to do the free walking tour of Cuenca on our last day there. Obviously, it would make more sense to start your stay with such a tour. The tour met across the street from the tourist office in Parque Calderón, the main square of old Cuenca.

By the 10:00 a.m. start time, a group of about 25 people had gathered. There were two guides, one for Spanish speakers and one for English speakers. Unfortunately, about 20 people in the group needed the tour in English. At Mr. Excitement’s urging, I started out the tour with him and the English speakers, but soon switched to the small group with the Spanish speaking guide.

The tour lasted about 2 and a half hours. Although both groups ended their walks at a Panama hat factory and store, Hormero Ortega, it turns out we went on almost completely different tours. We each thought our tours were worthwhile—not the best “free” tour we’ve ever been on, but a decent introduction to the historic old city.

The reviews of the free walking tour of Cuenca on TripAdvisor range from excellent to horrendous. I think it very much matters who your guide is. OTOH, since you pay what you want to at the end and can bail at any time, it’s probably worth giving it a try.

Factoid: “Real” Panama hats are not from Panama. They’re from Ecuador and are worn by both men and women.

The main plaza of Cuenca’s historic center, Parque Calderón, was within easy walking distance of Hotel Casa Ordoñez. The plaza has benches for a rest and one evening, we happened across a lively performance by a singer at the bandstand. (Mr. and Mrs. Excitement may have indulged in a little Latin dance in the darkness, but they’re sure there’s no photographic evidence.)

There are two cathedrals on the square, but the original, started in the 16th century, is now a museum and concert hall. The museum is not extensively curated, but contains some interesting decorative colonial Spanish ecclesiastical art. 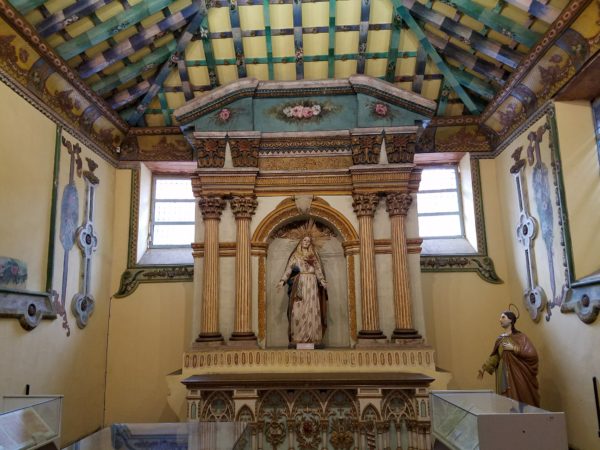 A side chapel in the deconsecrated Old Cathedral in the historic center of Cuenca, Ecuador.

The construction of Cuenca’s “new” cathedral started in 1885, but took almost a century to complete. The interior displays pink Carrara marble and stained glass windows. The cathedral feels massive and was designed to hold 9,000 people. 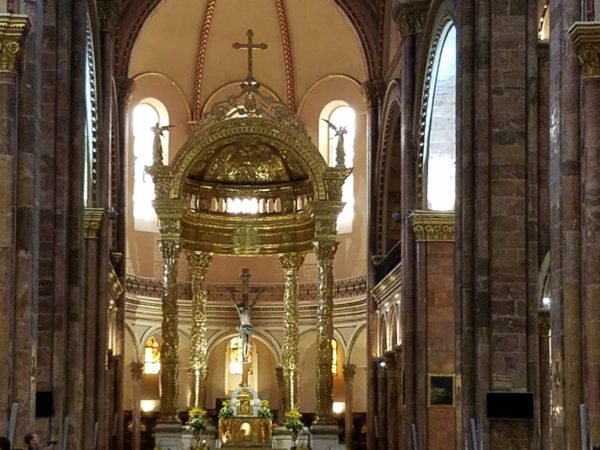 The main altar in the massive “new” cathedral in Cuenca, Ecuador.

We spent most of our first day walking down Calle Larga from Parque Calderón to the Museo Pumapungo, owned and sponsored by the Bank of Ecuador in collaboration with the Ecuadoran Ministry of Culture. Along the way, we passed several other museums.

The first floor of the museum had an exhibit of modern Ecuadoran painting. Most of the second floor of the museum is devoted to reconstructed houses, diaoramas and written material about the groups of indigenous people living in various parts of Ecuador. Note: Shrunken head alert. 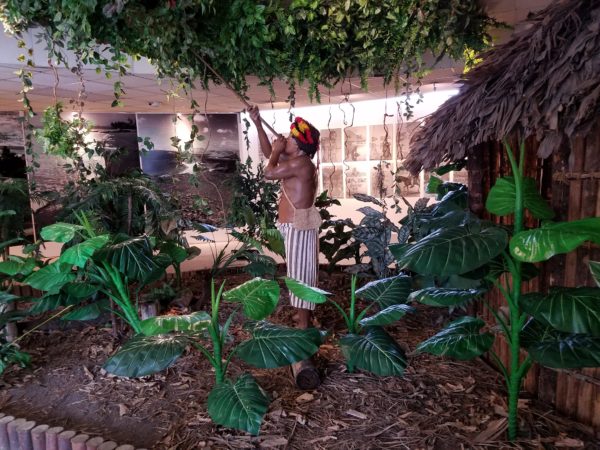 Diroama in the Museao Pumapungo in Cuenca, Ecuador. The outside of the museum is in an incongruous brutalist architectural style.

I found the museum worthwhile, but almost all the written explanations are in Spanish only.

The part of the museum we enjoyed most are the Inca ruins behind the museum although they are not extensive. Tomebamba was thought to have been largely disassembled by the Inca before the Spanish arrived. The Spanish used many remaining stones for their own construction purposes.

The ruins are atop a hill from which there is a good view of Cuenca’s “new” city and surrounding mountains. 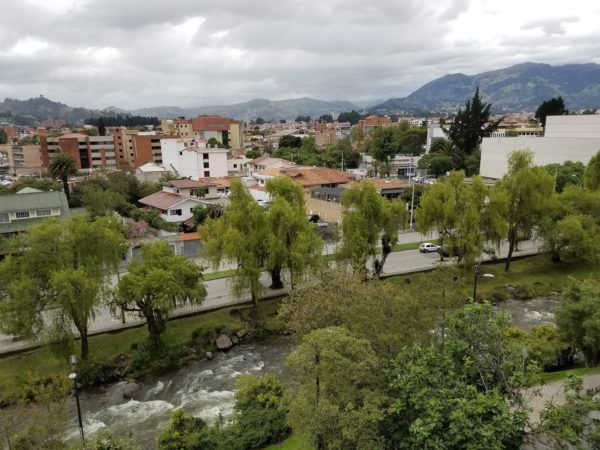 A view from the Inca terraces behind the Pumapungo Museum. Cuenca’s “new town” is across the Tomebamba River, one of Cuenca’s four rivers. There is a walking path along the river.

From the ruins, we walked down a path along Inca terraces leading to the Tomebamba River. Mr. Excitement was entranced by the llamas (or were they alpacas?) grazing on the terraces. Apparently, the feeling was mutual. 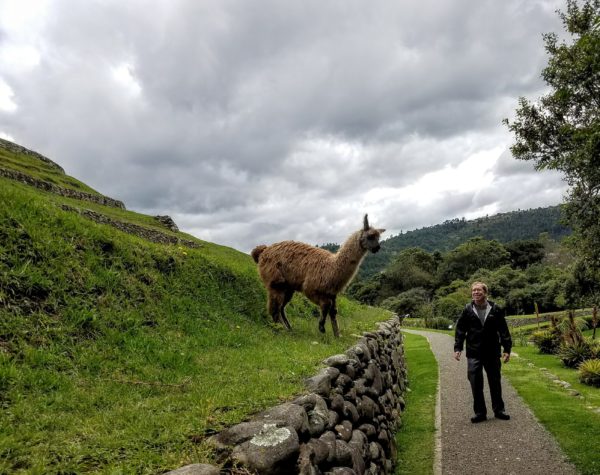 Apparently, you can be married to someone for 36 years and not know they’re a llama whisperer.

We walked back into the historic center of Cuenca along the Tomebamba River, the most important of four rivers that gave Cuenca its original Spanish name, Santa Ana de los Cuatro Ríos de Cuenca (Saint Ann of the Four Rivers of Cuenca). From the river it is a lung busting walk up several flights of stairs to get back to Calle Larga.

We walked back to the Center of Cuenca along the river, ending up at El Cantaro, a restaurant serving “typical Cuenca” fare on Parque Calderón, the main central square. 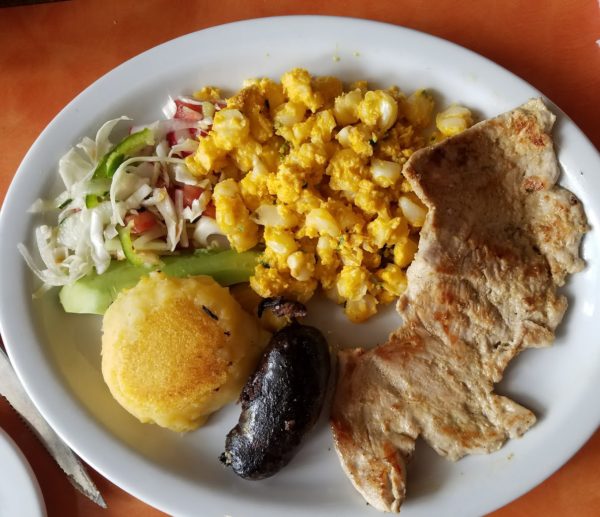 We violated the usual rule against eating at restaurants located in tourist areas with menus in multiple languages. Having said that, the restaurant was mostly full of Ecuadorans and the food was similar to what I remembered from living in Bogota, Colombia 40+ years ago: a small salad, a piece of grilled meat (Mr. Excitement had pork and I had chicken which were indistinguishable in flavor and texture), white rice, yucca and potatoes. Mr. E’s platter also had a piece of murcilla (Andean blood sausage) and mote pillo (large kernals of hominy (corn) with egg). A restaurant like this is a chance to try comida tipica (typical food) if you don’t feel comfortable venturing into one of the neighborhood covered markets.

Our Other Food Experiences in Cuenca:

For the rest of our dining out meals in Cuenca, we relied on recommendations from an expat friend. Having been less than wowed by typical Ecuadoran cuisine, we turned to restaurants serving “foreign” food.

We enjoyed both a lunch and dinner at Pho Vietnamita, Casa de Fideos (House of Noodles). Instead of consulting Alberto, we used a map to plan our own walking route to this hole in the wall restaurant. Our  route took us through a dark, poorer neighborhood. However, we walked back to our hotel using a different better advised route. (Note: When in a new place, anywhere in the world, it’s best to ask a local about where and how to get to places.) 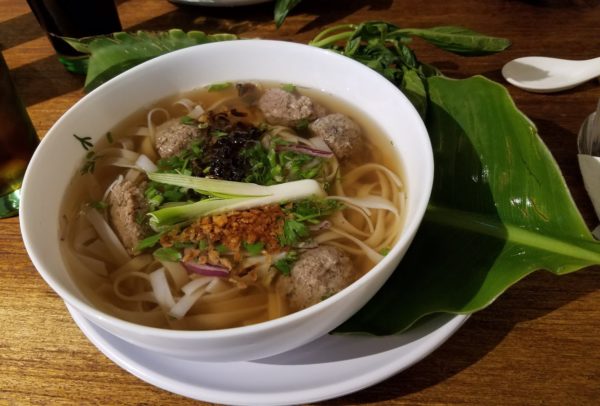 Pho in Cuenca, Ecuador — of all places.

Attesting to the fact that Cuenca has been “discovered” by the world, as we enjoyed our Vietnamese pho, we chatted with the restaurant’s owner and chef, a Filipino by way of Canada; the waiter from Venezuela; two other Americans from California; and a tour guide from England. (Tip: Order a medium size bowl of pho. Medium was too big to finish. Large must be humongous.) I craved soup in Cuenca. The dry air at altitude is very dehydrating.

We walked to Fabianos from our hotel through Parque Calderón. While it is certainly possible to have pizza at Fabianos, it is a full menu Italian restaurant. I ordered and enjoyed chicken piccata (a thin boneless chicken breast sauteed with lemon and capers over pasta). The restaurant is clearly a favorite of English-speaking ex-pats.

Although it is possible to have a worthwhile visit with one very full day for sightseeeing, when you plan your visit to Cuenca, Ecuador, it is worth giving yourself extra time to be able to do day trips outside the city and to absorb the city vibe.

Have you been to Cuenca, Ecuador? Do you have other suggestions or advice to share?