Canada’s former marketing slogan in the United States was, “Canada: Friendly, Familiar, Foreign and Near”. All are true which is why it is time to plan your visit to Canada’s Capital Region.

A wedding invitation prompted our August visit to Canada’s Capital Region. This designation spans two cities (and their surrounding areas) in separate provinces.

Canada’s federal capital city is Ottawa in the province of Ontario. Immediately across the Ottawa River is Gatineau in the French speaking province of Quebec.

Based on proximity to the wedding we attended, we stayed in Gatineau. Our Best Western Plus hotel was immediately across the Alexandra Bridge from Ottawa. Our room afforded us a postcard worthy view of Parliament Hill. 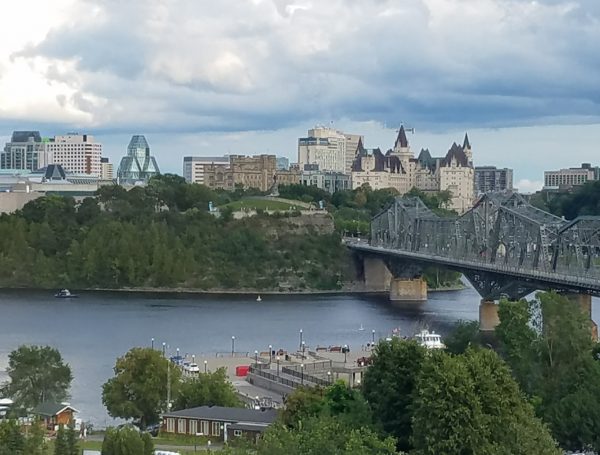 We enjoyed this view of Ottawa across the Alexandra Bridge from Gatineau, Quebec. The glass tower of the Canada’s National Gallery is visible to the left.

The wedding was held at the bride and groom’s apartment, a block up Rue Laurier from our hotel, and boasted the same view. The bride timed the wedding to coincide with the finale of a fireworks competition over Parliament Hill, celebrating the 150th anniversary of Canada’s confederation as a British dominion. 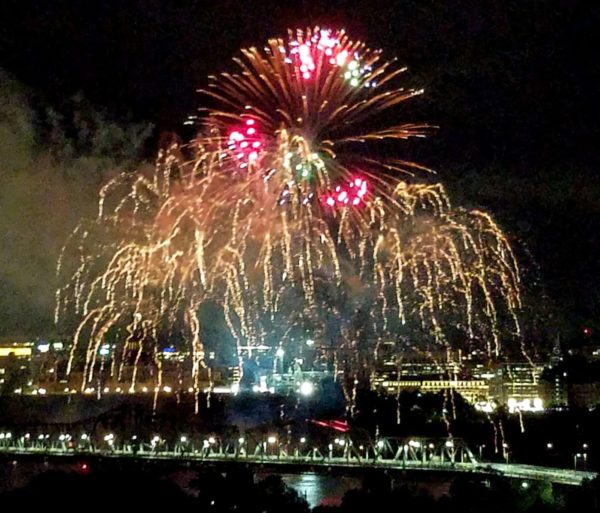 In addition to being able to enjoy the fireworks which were some of the best we’ve seen, we had the good fortune to be in Gatineau for MosaiÏCanada150.

MosaiïCanada150 was a quite extraordinary outdoor exhibition of 32 large plant and flower constructions in Gatineau’s Parc Jacques-Cartier on the Ottawa River, right next to the Alexandra Bridge. Unfortunately, the exhibition closed on October 17, 2017, but I’m happy to be able to share this photo to give you a taste of what it was like. 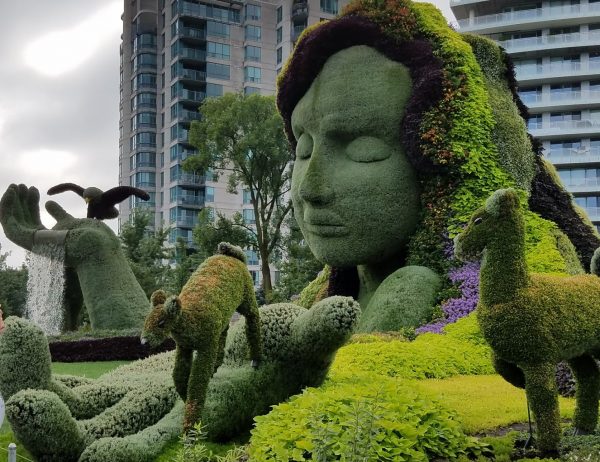 This is a flower and plant construction of Mother Earth, one of the 32 such displays that were part of MosaiiCanada150, in the Parc Jacques Cartier, along the Ottawa River in Gatineau, Quebec.

We easily filled two days of sightseeing by visiting venues to which we could walk from our hotel. They included the following:

The Canadian Museum of History is in a striking building in Gatineau, across the Ottawa River from Parliament Hill. When you plan your visit to Canada’s capital region, if you are interested in history, this museum is a must visit. 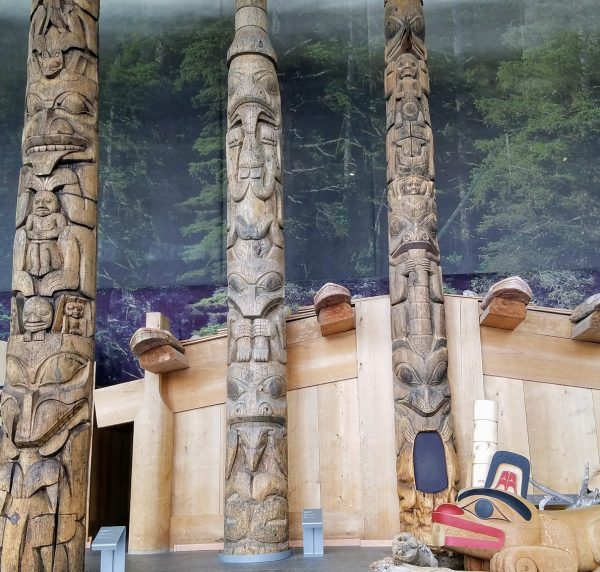 Just a few of the totem poles on exhibit in the Canadian Museum of History.

We started our visit with a 20 minute film in the IMAX type Ciné which was included in the $20 (Canadian) admission fee. The inspirational film we saw was a celebration of Canadian life from the Atlantic to the Pacific set to music.

We easily spent two hours in the brand new Canadian History Hall which occupies the top two floors of the museum. This expansive exhibit covers 15,000 years of human history in Canada.

As Americans (United Statesers?), we learned there are familiar themes in Canadian history such as the often fraught relationship between European settlers and the indigenous tribes (referred to as “the First Nations” in Canada), the evolving relationship with Great Britain, and westward expansion.

The exhibits also chronicle and explain the still often tense relationship between English and French speakers, and Canada’s 20th and 21st century participation in the world community of nations, including both World Wars.

The ground floor of the Museum, one floor below the entrance area, has what is billed as the largest museum display of totem poles. In addition to enjoying the “forest” of totem poles, find the staircase with the interesting ceiling mural, Morning Star, by First Nations artist Alex Javier. Tip: Don’t fall backwards down the stairs as you try to take a photo of it. 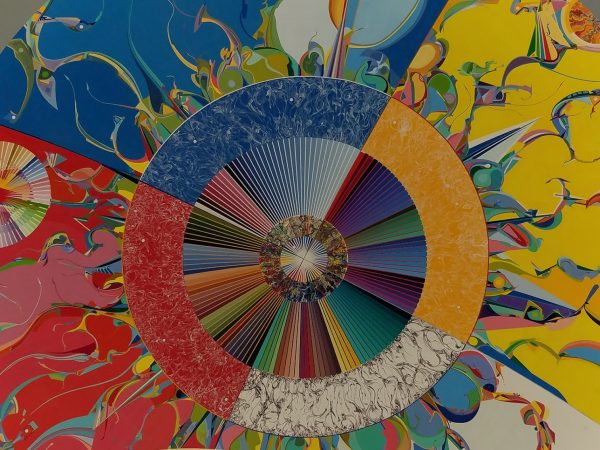 The intriguing ceiling mural by First Nations artist, Alex Javier, in the Canadian Museum of History.

Since we had no little ones in tow, we did not visit the Children’s Museum section, but judging by the number of visiting children, it is a popular interactive, hands on venue. We also skipped the special exhibits. We just aren’t that interested in hockey. (Shhh. Please don’t tell any Canadians I said that.)

There are four food venues in the museum, including a cafe and a sit down restaurant that received good reviews.

Tip: Tickets good for 90 days can be purchased online. At various times during our visit, there was a queue for tickets, so this is potentially a good idea.

When You Plan Your Visit to Canada’s Capital Region, Include a Walk Across the Alexandra Bridge Between Gatineau and Ottawa

Our hotel in Gatineau, the Best Western Plus, proved to be conveniently located for visiting the main sites in both Gatineau and Ottawa without relying on a car or public transportation. Based only on my personal observation, neither taxis nor Uber rides seemed to be readily available. Even a pre-ordered taxi showed up 15 minutes late.

The Canadian Museum of History in Gatineau, Quebec viewed from the Alexandra Bridge over the Ottawa River.

The bridges near our hotel over the Ottawa River into Ottawa (the Alexandra and Portage) had dedicated pedestrian pathways. There are excellent views of Parliament Hill from the Alexandra Bridge and also viewing platforms with interpretive placards.

One regret was not being able to secure a ticket for a tour of Parliament buildings. Free “day of” tickets are available across the street from the main Parliament buildings at 90 Wellington Street. Not surprisingly, on a busy summer Saturday, none were available by the time we arrived in the afternoon. Reservations can and must be made for groups.

Meanwhile, you can enjoy this online virtual tour and I can resolve to plan better next time. 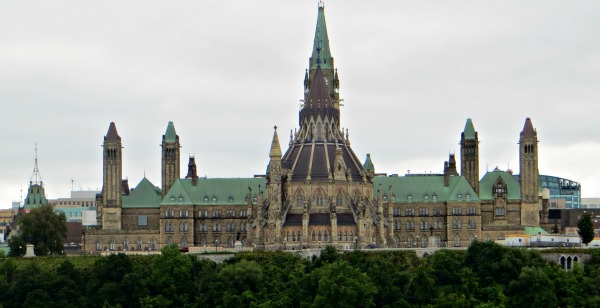 The back of the Parliament complex from the Alexandra Bridge. (Photo credit: Mr. Excitement)

We also missed the nightly evening sound and light show of Parliament Hill, but again, better advance planning will keep you from making the same mistake.

Even without being able to enter the Parliament buildings, we enjoyed walking around the park like circumference of the Parliament grounds which are sprinkled with statues commemorating Canadian historical figures and has beautiful river views.

A few blocks from the Ottawa end of the Alexandra Bridge and close to Parliament Hill is the historic ByWard Market where we enjoyed pub lunches on both days of our visit. The historic, pedestrian friendly, open air market stall area has artfully displayed produce. Around the periphery of the produce area are stores offering cheese, wine and baked goods. You can also browse the market for tee shirts, souvenirs, and artisan clothing and jewelry. 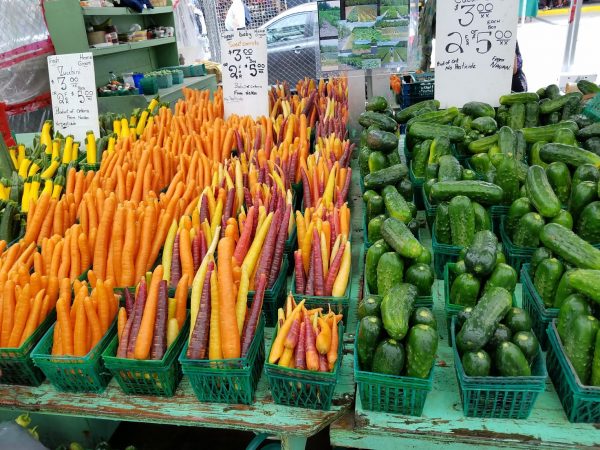 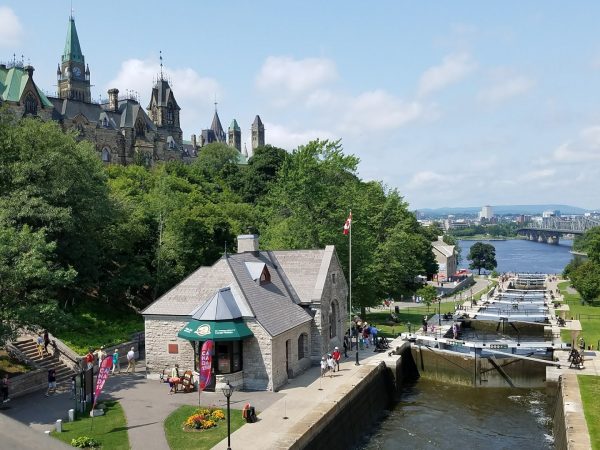 Flight of 8 locks lifting or lowering boats from the Rideau Canal to the Ottawa River.

Walk down Rideau Street to the Plaza Bridge to get a (low-flying) bird’s eye view of the UNESCO World Heritage Site flight of eight working locks. These locks raise and lower boats 79 feet between the 126 mile (202 km) Rideau Canal Waterway, and the Ottawa River. An engineering marvel in its day, construction of this inland waterway started in 1826.

The striking tin clad steeples of Ottawa’s Notre Dame Cathedral are visible from many vantage points in Ottawa and Gatineau. Construction of the Cathedral started in 1841.
We have visited many cathedrals throughout Europe and the world. In my opinion this Cathedral has one of the most beautiful interiors. There was no charge to enter the cathedral. If you would like to attend a service, check the schedule on the Cathedral of Notre Dame website.

The Cathedral is located on Sussex Drive, across from the National Gallery of Canada. 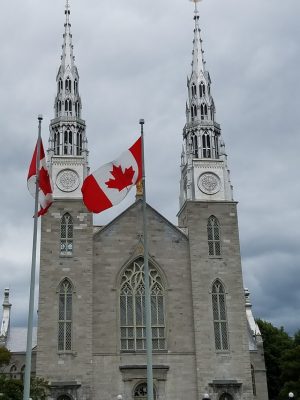 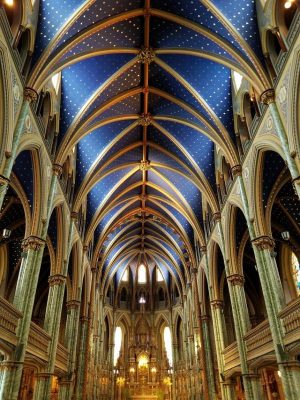 The graceful interior of the Cathedral of Notre Dame in Ottawa, Canada.

The National Gallery of Canada

The National Gallery of Canada is in a building with a unique glass “tower”, right across the street from Notre Dame Cathedral. However, from the outside, its most memorable feature is Maman, a 33 foot high spider by sculptor Louise Bourgeois acquired by the National Gallery in 2005. 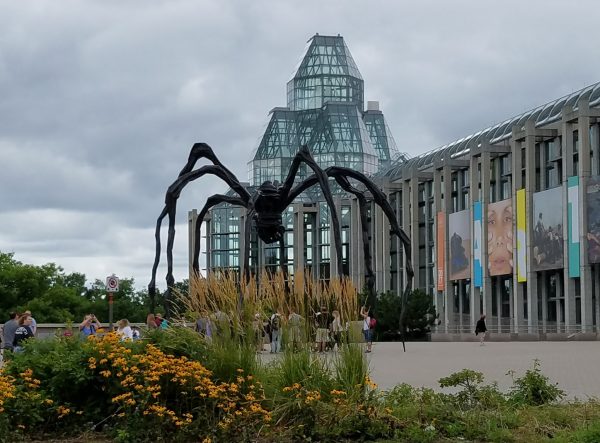 The famous Maman “guarding” the National Gallery of Canada in Ottawa, Ontario.

The National Gallery of Canada features Canadian and international art. Unfortunately, because of our time constraints, we had to choose between visiting the Gallery or walking to the Canadian War Museum. History geekness won out.

The website of the Canadian War Museum touts itself as the Ottawa museum ranked #1 on TripAdvisor. (Indeed it is. I checked).

This environmentally sound, stark concrete museum is walking distance from Parliament Hill, but is set off by itself on land finally reclaimed after having lain desolate following a devastating 1900 fire. The current building opened to the public in 2005, but the museum itself had its genesis in 1880 and also houses a robust military history research centre.

The museum’s galleries take one through Canadian military history from the First Nations, and through the colonial era, including the military conflict with France which still echoes in modern day Canada. Well curated exhibits also chronicle Canada’s participation in the Boer War in South Africa (1899-1902), in the two 20th century world-wide cataclysms, in the Cold War, and as a leader in establishing a U.N. peacekeeping force.

The 2005 Canadian War Museum is constructed of textured concrete. To me, it was fittingly evocative of a bunker. (Photo credit: Creative Commons Lic. 3.0 Wikimedia User: Balcer )

In addition to 2017 marking the 150th anniversary of Canadian confederation, it also marks the 100th anniversary of the World War I Battle of Vimy Ridge. This fierce battle and Canadian victory in France is considered by many to be the moment when Canada earned world respect as a military power in her own right. The museum exhibit conveys the particular brutality and military tactics that resulted in 10,602 Canadian casualties: 3,598 killed and 7,004 wounded in the three day battle.

The museum succeeds in presenting both a factual version of historic events and the human face of war. We easily spent an hour and a half walking through the galleries before collapsing for a smoothie in the Museum’s cafe.

In addition to the individual venue websites to which I have linked above, the official Ottawa Tourism website is very helpful in planning a visit to Ottawa and the Canadian Capital Region. Gatineau, Quebec, also has a special guide.

We drove on this trip from Philadelphia, Pennsylvania to Ottawa-Gatineau, but Ottawa also has an International Airport and can be reached by train and by bus.

Have you been to Canada’s National Capital Region? If so, are there other places you would add to the list of places to visit in the Region?

Travel Books by Travelers: The Perfect Gift for Readers Who Like to Travel

As a reader and a person with a severe case of wanderlust, I enjoy travel books written by travelers. That...