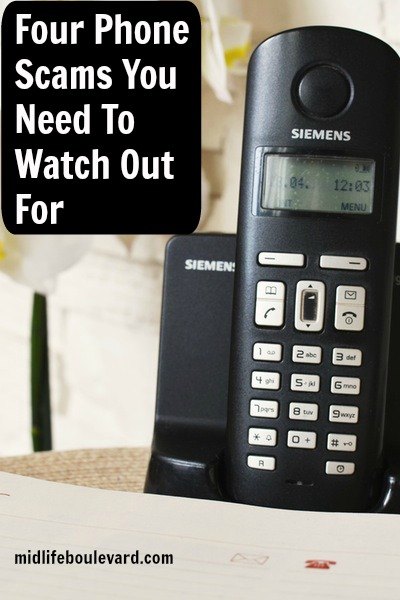 Being the age we are (#sorrynotsorry), many of us still have landline telephones. Just to get it over with, let me list a couple of reasons we’ve held on to these relics of an era past.

However, one thing plagues landline users more so than people who have cut the cord. Unwanted calls from marketers and scammers set our phones a-buzzing, sometimes several times a day. On a cell phone, you can block unwanted calls, so they’re not so much of a problem. If you have a Verizon Fios landline, you can also block calls, but the scammers are really good at changing telephone numbers or making it seem like they’re calling from a different number. It’s hard to eliminate junk calls even on Fios.

These annoying scam calls can also be downright dangerous. It’s estimated that phone swindlers steal $36 billion a year from vulnerable parties, especially the elderly, as well as people who are racking up the years but don’t quite qualify as elderly. Americans 65 and older are more likely than any other group to be targeted by the fraudsters, and more likely to be duped according to the National Center for Victims of Crime.

You and me? We’re too wise to be tricked. Still, those phone calls can be scary, particularly the ones where there’s a real human voice at the other end of the line urgently telling you that the IRS is after you or you’re going to be arrested for skipping jury duty. Knowing about the three most common scams might help you keep your loved ones from getting fleeced by these illegal schemes.

The Microsoft Scam. The person on the phone says he’s from Microsoft support and that you have a terrible problem with computer viruses. If you reply that you have Apple products, he’ll say that they are support for all computers and yours has dangerous malware they want to warn you about. Stay on the line, and the guy is likely to ask you to view your event log, which will show that you have tons of errors. And yes, there will be. Because that’s what the event log does, and it may look frightening, but it is normal. Again, there is nothing wrong with your computer. The intent of this scam is to sell you what they say is virus protection or malware clean-ups. You’ll have to give the caller a credit card to pay for that: Scam #1. Then he’ll install malware on your computer (because as anyone who has ever dealt with computer support knows, there are programs that can give access to your computer) that will enable his employers to find important personal information: Scam #2. I keep thinking that by now everyone has received this call and knows it is bogus. But even though I have told them that the FBI has tapped my phone to trace them, and they’ve hung up on me, they keep calling back. People are scared of identity theft, and this scheme plays on those fears to swipe important data from your computer.

The IRS Scam. A gruff voice on the other end of the phone SHOUTS that you owe the government money and you will have to pay a heavy fine and serve jail time. “Wait,” you think, “this must be a mistake.” So you press 1 and get to a “real person” who asks for your social security number, birthdate, and other personal information that can be used in identity fraud. At the end, they’ll thank you for setting the record straight, but you’ve already given them the farm for free. Note: The IRS in cases of tax problems still notifies people by mail. And they would never shout at you.

The Jury Duty Scam. So similar to the one above! You’ve neglected your jury duty summons and the marshal is about to arrest you. (Having ridden all the way in from Dodge City. Bad joke.) Yes, it is true that if you try to ignore jury duty you’ll get notice after notice and eventually another notice that asks you to appear before a magistrate or some kind of authority in your county. But no one will ask you for your social security number and birthdate OVER THE PHONE. If you think you might have been negligent about jury service, it’s best to call for yourself. Simply search online for the telephone number — type in “jury duty contact ‘my home town'” — and the URL will have a .gov extension.

The PBA Scam. No doubt that the Policeman’s Benefit Association (PBA) is a worthy cause, providing scholarships to kids whose parents have been killed or disabled while on duty and organizing after-school and sports clubs for needy kids in the neighborhood. But they aren’t the ones making these calls. It’s some guy who acts really friendly and calls you by your first name. All he wants is your credit card number, and when you look at your bank statement, you’ll see your donation has not gone to the PBA. Some credit card insurances will cover this; the fraudster will try to steer you to a card that will not. If you’d like to support your local PBA, stop into your local police station.

Although I get some kind of perverse enjoyment telling the Microsoft scam guy (and it’s been the same guy for the past two years) that he’s about to be arrested, the Federal Trade Commission (FTC) suggests that as soon as you realize it’s a scam call, you hang up immediately. Any interaction with these calls — including a connection to an answering machine — sends a signal to the scammers that your phone line is live, and you will continue to receive calls, no matter how many times you hang up. It’s also extremely important that you tell anyone you consider vulnerable about these calls. Inform elderly relatives and friends who tend to worry a lot. Help them be more aware. If any say that they have indeed given information, contact the Federal Trade Commission (FTC) online or by phone (877-382-4357) immediately. You can also report the calls to the Do Not Call Registry, although my personal experience is that the scammers are tech-savvy enough to change the numbers from which they call faster than we can type.

Also really aggravating is that back in June 2015, the FCC told phone companies that they can legally block robocalls, though none of the phone companies that I know of have yet taken action. I believe non-profit and political calls are exempt (groan) from this ruling. But it would be terrific to have a firewall to protect us from scammers who use robocalls to transmit an alarming message and then give a number to call back and thus begin the scam. There is no truth to the persistent Internet rumor that marketers will be given access to cell phone numbers.

Nevertheless, landline or cell, I think we all agree with FCC Chairman Tom Wheeler: “Listening to Congress and the American people, the message is clear: No unauthorized, automated calls. Stop it, and stop today.”

Thanks Carol. One good thing about landline plans these days is that it's pretty hard to go above your allotment for long distance.

Not picking up toll-free or unknown calls is a great tactic -- except I know many people who block caller ID for their own privacy. If I don't pick us when the display says "unknown number" I often get a text saying, "pick up your phone!" ;)

That's right! I forgot about that. I have several hundred minutes I never use during the course of a month so that's another perk :)

I started tracking the calls that were coming in to our home on our land lines. It turns out that nearly ALL of them were from marketers in one form or another. A few were things like Drs and the pharmacy robocall. And so we took this to heart. "Those over 55 are clinging to their land lines. Those under 35 never HAD one. And so we cut the cord. And like so many others, we never missed it. With some minor adjustments to charging needs, the biggest change is that we would still look for the blinking answering machine when we came home!

Thanks for the heads up about the scams and I am sharing this post.

I think I can safely say I will NEVER get rid of my land line for several reasons. It is on my desk, where I spend most of my days, and usually on speaker so I can work on the computer while on the phone.

I have an 800 line for family, friends and clients to use which saves them the cost of a long-distance phone call.

I have call display and never pick up toll-free or unknown calls. Therefore, don't have to listen to the potential scammers.

When the power goes out for an extended length of time (we live in a windy area) I don't have to worry about losing battery strength on my cell.

I don't have to walk to a certain part of the house to be sure I get a good connection on my cell.

I'm never without my cell when I am away from the home or office but at home......I prefer my landline.

Managing Grief After Losing Your Parents

Barbara is a psychotherapist and life transition coach. You can find her at barbarawassermancoaching.com. This post was originally featured there. ...