No, this isn’t going to be about punctuation.

Nor does it have anything to do with history. 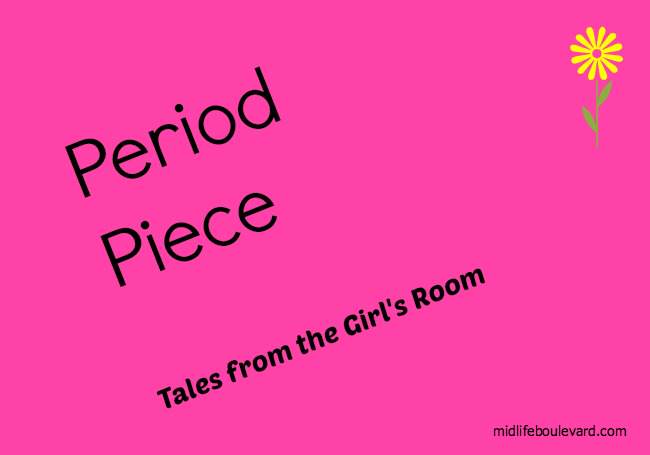 It’s about that other kind of period. The one that I was so excited about before it started. The one I couldn’t wait to get. I was practically hopping up and down, waiting for this undeniable sign of womanhood. I was a younger sister who wanted to catch up, to have access to the big blue Kotex box my mother kept in the closet with the sheets and towels. And then one day it happened. A mild cramp, a moment of confusion. Checking to verify with my mom in an airport bathroom.

Not what I was expecting at all. Hardly anything to see, and I felt pretty much the same as I had the day before.

But what did I know? I was only nine years old. Still in elementary school. First of my friends to “start.” It was a struggle to act normal when I was sure everyone could “tell.” And this was back in the days when the only way to deal with that time of the month was to wear those bulky pads that had to be woven onto to a skinny elastic belt through little metal pieces with sharp teeth. Oh, the horrors of dealing with this complicated process during recess when everyone else was running around playing tag or slugging a tether ball! I’d be stuck in the girls’ room trying to untangle the ends of what my friend’s mother said she used to call a “mouse mattress”—and get a new one attached to the metal clasp before the bell rang—or before someone else came in and wondered what was taking so long. And it either felt like I was trailing a large caboose or wearing a cottony codpiece. And I had to carry pads to school in a purse, wrapped up in a brown paper bag. Gross.

The whole thing was a bit of a letdown once it happened—and kept on happening (in my case, anyway) with plodding regularity for the next 45 years, with only nine months’ time-off for bad behavior during each pregnancy.

Somewhere around fifth grade, after the horse was out of the barn for me anyway, the girls and boys in my class were sent to separate rooms and filled in about the pending perils of puberty.

We were subjected to a dreadful slide show, complete with diagrams of fallopian tubes and a slow-moving dot representing an egg. Did they mention sex? Not that I recall. The disembodied male voice droned on about “unfertilized eggs” and I probably let my thoughts drift to my grandfather, who was in the egg business for many years. He used to bring over flats of eggs for my family when he came to visit. But these visits were different than the monthly visits from “my friend,” which would signify the loss of an egg every month for what seemed like forever.

When I first learned about the whole period deal, I asked my dad what boys got when they started to grow up. Boys must have something like this too, right? Right? I was incredulous when he told me that there wasn’t anything similar in boy world. Boys didn’t get periods. Girls were suddenly besieged with the word “dainty,” while boys were still little kids, able to swim any time they wanted to—in white trunks if they wanted. We girls, on the other hand, had to mind what we wore, where we sat, when we swam, and what to say when we didn’t feel good but didn’t want anyone to know exactly why.

But it turns out my dad wasn’t completely right. At least girls didn’t have any reason to leave their shirttails out for the next six or seven years. Ha!

Yes, Bren--the thrill is gone all too soon!

I remember how excited I was too. I was 12 when my first started and now at 45 years old, I LONG for the day for it to end! Thanks for the memories!

Here’s a list of stuff  kids will never understand or use like the Polaroid camera, fax machines or shopping at...