No matter how many times she’s cooked a turkey, Suzanne Fluhr still can’t seem to shake those Thanksgiving jitters. Read more from Suzanne on her blog, Boomeresque.

When I was a child, we would pile into the family Chevy on Thanksgiving Day for the drive from our house in Philadelphia to my grandparents’ one-bedroom apartment in Brooklyn. In her tiny kitchen, Grandma Minnie would somehow produce a perfect, sit-down Thanksgiving dinner for 20. I inherited her china, but not her confidence in the kitchen.

Every year, the prospect of cooking a turkey filled me with dread. The mere act of purchasing a turkey would find me paralyzed in front of the supermarket turkey collection. I tried thinking of the turkey as just a big chicken, but the Thanksgiving turkey assumed mythic proportions for me. 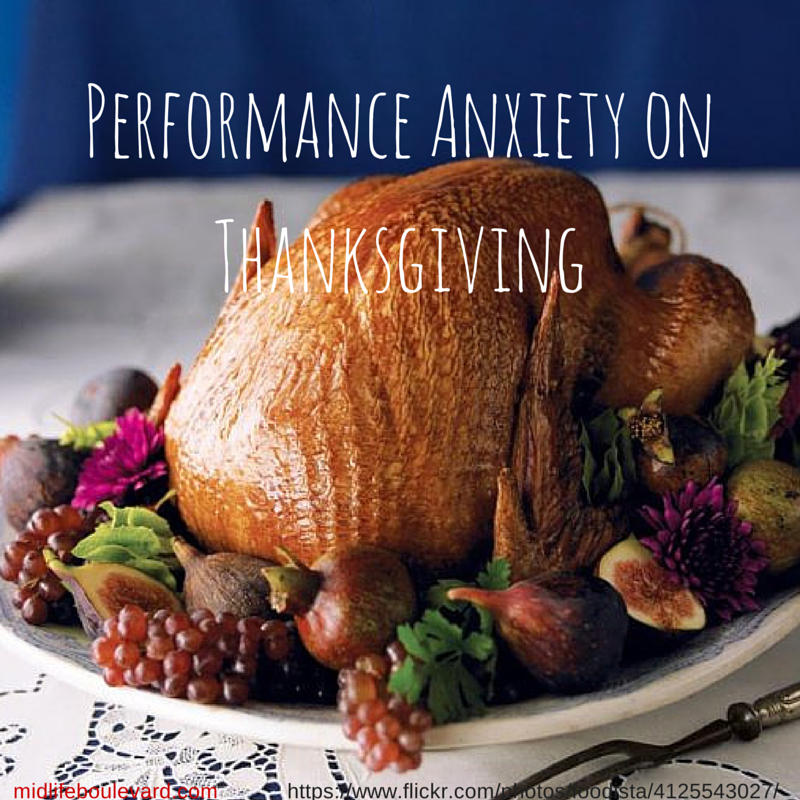 I would have nightmares about roasting the turkey for hours with hungry, expectant guests seated at the table in a Norman Rockwell tableau, only to discover that it was still raw at meal time. I had visions of my guests being admitted to the hospital with salmonella poisoning. I would pore over cookbooks, surf Internet recipe sites, clip turkey-cooking tips from the newspaper, and keep the turkey hotline number near at hand. The fact that I successfully produced a properly cooked Thanksgiving turkey for thirty years did not convince me each year that I wouldn’t fail miserably.

We learn about the Pilgrims and Squanto in elementary school, but no one warns us that Thanksgiving is sure to expose family pathology. I worried if it would offend my sister who married Dizzy the Clown if I told her I didn’t want the dinner devolving into a circus? Would my irreverent father start eating before everyone was seated? Would my husband’s 97-year-old Bulgarian grandmother refer to any ethnic group as peasants? Would my mother feel unloved if I asked her not to bring sweet potatoes with little marshmallows?

My turkey-cooking performance anxiety was accentuated because every year we would invite foreign graduate students to share this most American of repasts with our family. My angst was therefore heightened by the thought that world opinion of the United States might somehow be influenced by the success or failure of my turkey.

Growing up, our sons were always anxious to learn who would be joining us for Thanksgiving. One year we had our “Axis” Thanksgiving, with guests from Germany, Italy, and Japan. When we shared our repast with a Serb, I didn’t invite my Bosnian friend who had been granted political asylum in the United States. When Arnaud from France joined us in 2003, Freedom Fries were not on the menu. One year it was a New Zealander and his Chinese girlfriend.

I was always concerned when we invited Asians because despite the fact that they might happily consume jellyfish, ancient bird nests, and shark fins, I’ve never come across turkey teriakyi or General Tso’s turkey. I would just tell them it tasted like — chicken (a big, probably too dry, too tough, tryptophan-laced, coma-inducing chicken).

One year our sons listened with rapt attention to an imposing Sikh guest who explained that his turban held his hair that had never been cut. He was looking forward to the day his parents would arrange his marriage. And oops(!), he was a vegetarian. Fortunately, there was plenty of string bean casserole — and sweet potatoes with little marshmallows.

Somehow, each year, I would rise above my turkey-cooking phobia. My husband would give a little speech about being thankful and we’d say a prayer for those less fortunate and for world peace. Our guests would be suitably impressed when the bird was presented. As I held my breath, my husband would wield the carving knife and the juices would run clear. I would heave a sigh of relief.

Later, after the last of the pumpkin pie and whipped cream had been consumed and we had bidden our guests adieu or sayonara or auf wiedersehen or do videnja or zai jian, I would reconnoiter with the turkey carcass in the privacy of the kitchen. I’d notice that there weren’t many leftovers. And then, like an NFL wide receiver who just caught the ball and ran the length of the field for a touchdown, I’d point up toward heaven — and start washing the dishes.

This year, for the first time in thirty years, we are passing the Thanksgiving hosting baton to our son and daughter-in-law. I’m bringing sweet potatoes with tiny marshmallows.

A version of this essay was originally published in Thanksgiving Tales: True Stories of the Holiday in America. Reprinted with permission of the publisher.

I admit it feels a little strange not to have to cook a turkey this year now that I have passed that baton to our son and his wife, but I don't miss the anxiety.

I'm from the Philadelphia area, but the turkey-cooking-performance-anxiety also resonates with me! This year, we have actually booked a lovely place at the Jersey shore for the family (including my sister and her husband and children as well as my mother) and will bring the turkey there. It will be a group effort for sure, and by the ocean how can one feel stress, right?