Parents Guide to The Zookeeper’s Wife

This is a spoiler-free guide for parents who are interested in taking their children to see the movie. I take my kids to movies to get the conversation started about past world events. History is so much more real to children when they can see how people lived. I know for me, seeing the homes and clothes from the past in movies makes it more alive to me than just reading about generals and dates of battles.

The Zookeeper’s Wife is based on the real story of Antonina Żabińska, wife of Warsaw zookeeper, Jan Żabiński. Together the couple helped Jews escape the Warsaw ghetto and sheltered them in the zoo during the Holocaust. 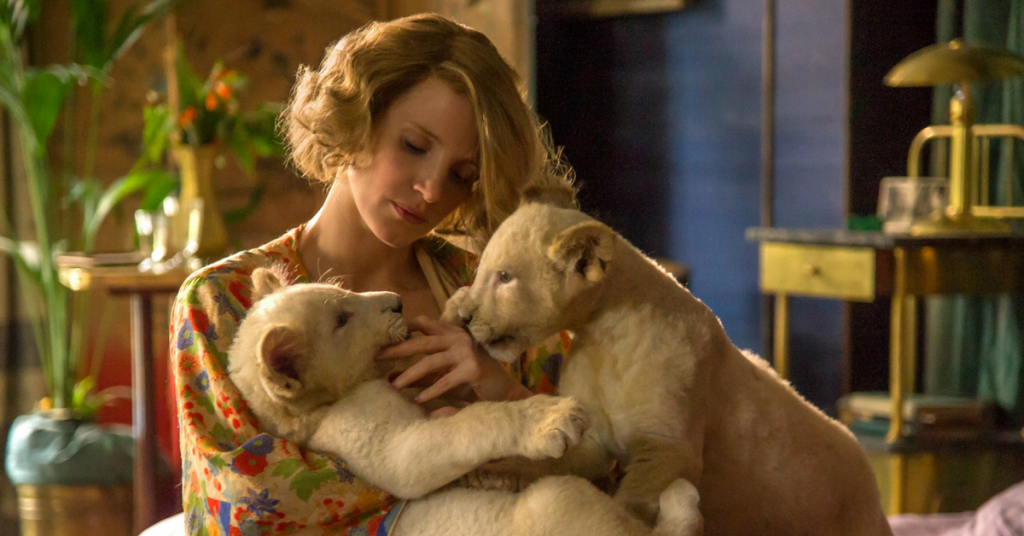 Because this is a Holocaust movie, there are multiple scenes of destruction. There is a bombing where a woman and child are at risk. I didn’t notice human bodies, but the animal cages in the zoos are bombed.

There is a scene where two secondary characters are executed in the street. They are shot in the head and collapse. Though the gore is limited, it’s a highly distressing image.

A child is taken offscreen before a gunshot is heard. The other character onscreen assumes he’s been killed.

Several urban battle scenes are shown. Characters are shot and fall, but the images are more emotional than gory.

Characters are often at risk from discovery from the Nazis.

Children are loaded onto a train boxcar. They do not understand they are going to a concentration camp to be killed. 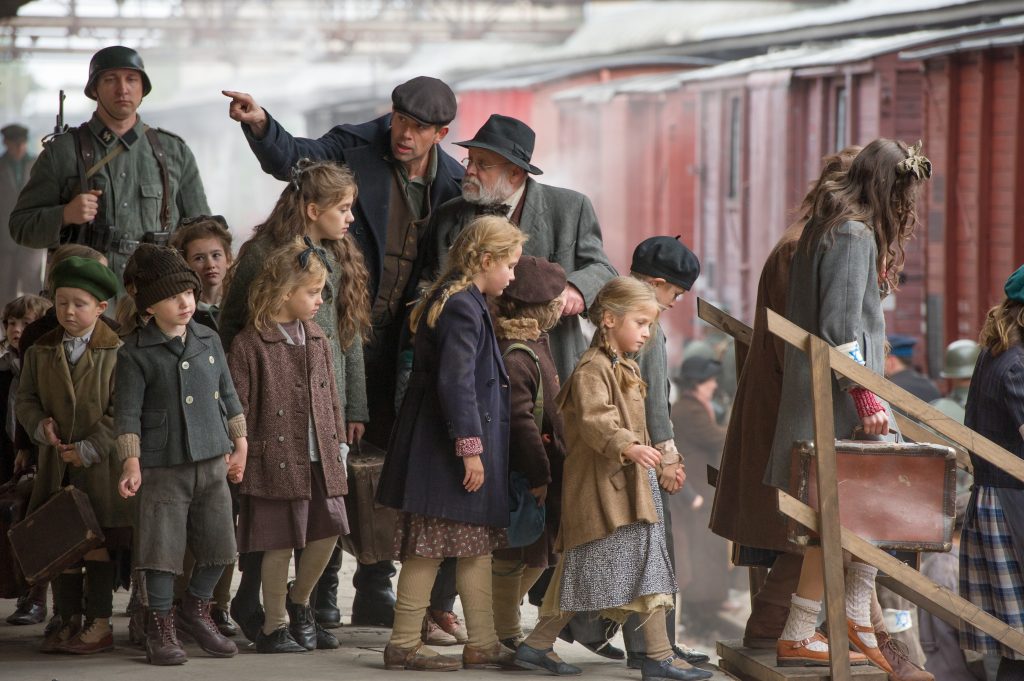 Life is shown in the Warsaw ghetto where the Nazis have sequestered all the Jews in Warsaw. The ghettos is a lawless place where Jews are abused and shot by the soldiers. Dead bodies are shown on the street. People fight each other for food and other goods.

Sex and Nudity in The Zookeeper’s Wife

A married couple often has conversations in bed at night. Usually they are in nightclothes, but at least once they are obviously nude and covered by the bedclothes. Once the woman rolls over and her naked breast is briefly visible.

In a different scene, a married couple is dressed but kiss passionately in bed before the scene cuts away.

A man lifts up a woman and tosses her on a bed. He kisses her and paws at her. While she has allowed contact, she obviously does not want contact. No sex is shown or implied. I do not recall any nudity.

A teenage girl is escorted down a side street by two soldiers, implying rape. Later the same girl is seen dazed, dirty, with her clothing torn and blood on her legs. It’s clear she’s been raped, though the assault is not shown and it’s not openly discussed by characters.

There is social drinking by adults at a party.

I do not recall any bad language.

The Burning of the Warsaw Ghetto

On April 19, 1943, Nazis began clearing the ghetto. Jews remaining in the Warsaw ghetto were killed. They were either shot by German soldiers or died when the buildings were burned. Despite an uprising where Jews fight back, after a month of fighting any surviving Jews were shot or deported to death camps.

In the movie, soldiers are shown shooting, and using flamethrowers to burn buildings with people inside. Ash falls like snow on the people at the zoo.

Harm to animals in The Zookeeper’s Wife

Here’s my second main caveat for parents. There is a lot of violence to animals in this movie. I muffled my tears with my scarf often. I expected the risk to humans, knowing already what happened in Warsaw, but I didn’t expect the massacre of the animals.

Animals are harmed in the initial bombing of Warsaw. Animals who escaped their damaged cages are shot for the safety of Warsaw citizens. 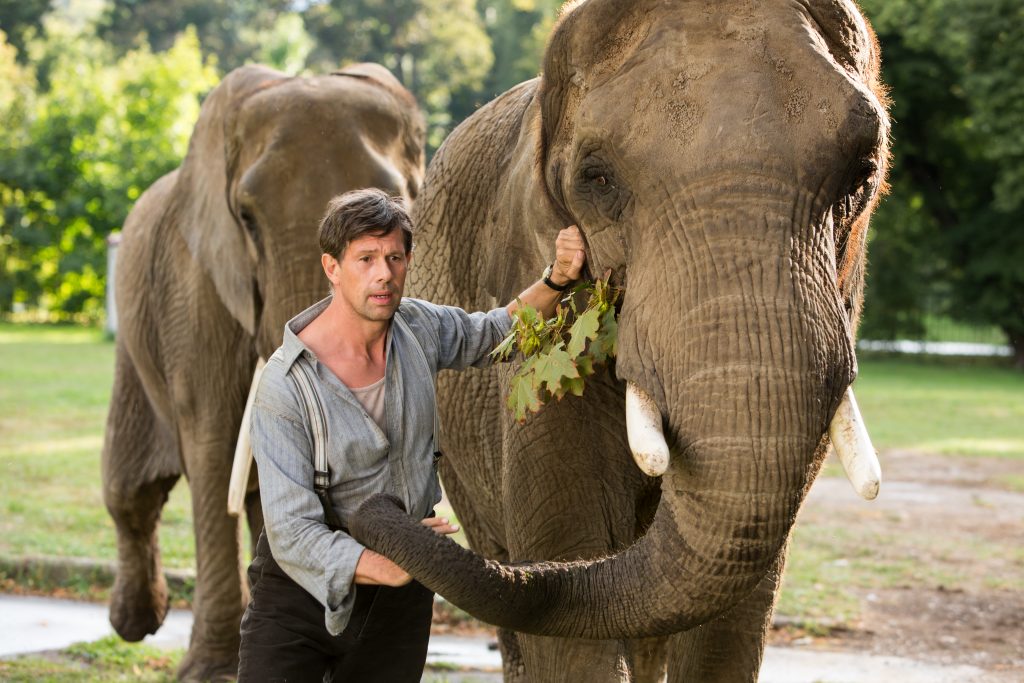 Animals are shot on orders by the invading army for fun, sport, or to relieve the occupation forces of the burden of feeding them.

We see the animals in distress, shot, and dragged off to be buried or burned. One animal is later shown stuffed and mounted in someone’s office.

Why Your Children Should Not See The Zookeeper’s Wife

Young or especially sensitive children might be upset by the human and animal deaths.

Why Your Children Should See The Zookeeper’s Wife

While there were literally hundreds of thousands of deaths in Warsaw, Poland, during World War II, The Zookeeper’s Wife movie focuses on the strength and bravery of the Jews and their non-Jewish neighbors who sheltered them.

Ultimately, it’s an uplifting movie, and an important story of resistance and strength in the face of almost-certain death. The main characters use ingenuity and quiet bravery to shelter, feed, and hide refugees over the course of years. 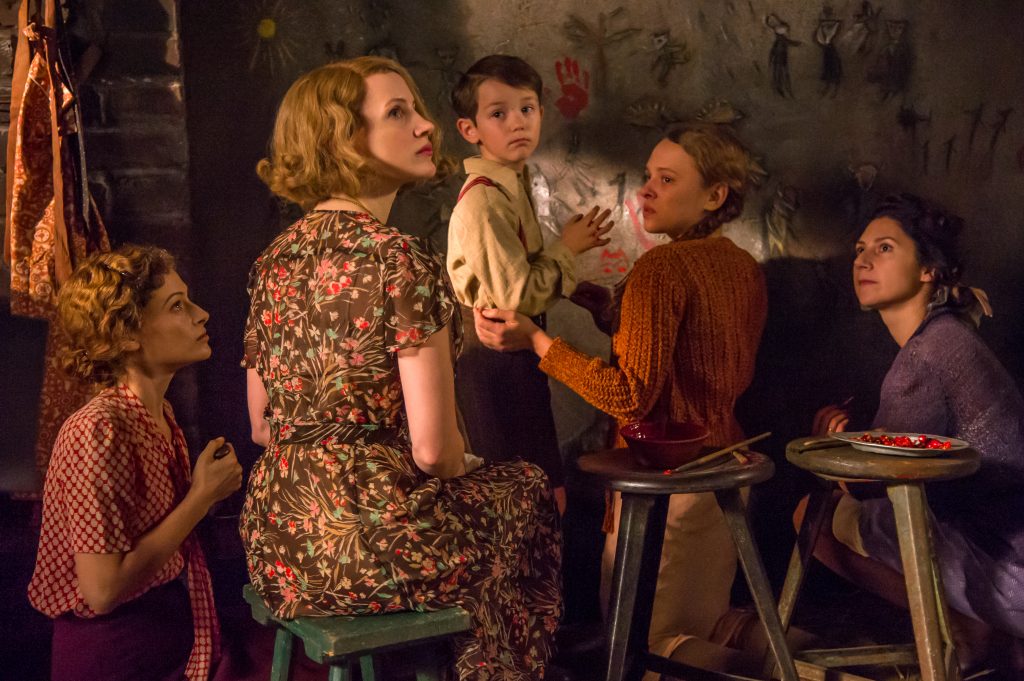 Also, this is one of the few women-focused Holocaust stories I remember seeing in a movie. While Jan leaves the zoo to sneak Jews out of the Ghetto, and later to fight with the resistance, Antonina must fight in a different way.

She has to hide, feed, and care for three hundred people over four years. Nazis patrolled the grounds of the zoo every day, so they were always at risk of discovery. An important Nazi visits often and flirts with her. She hates him, but must disguise her loathing for everyone’s safety, including her own two young children.

So many war movies focus on the soldier, but The Zookeeper’s Wife focuses on the women who both kept the homefires burning and resisted invading forces. It’s a rarely-seen portrayal of feminine strength during the darkest of times.

In the final scenes, we rejoice at the return of both people and animals to the zoo, and learn the fate of the family and those they protected. It makes the tears worth it.

Thanks to Focus Features and Kelly Sillwell for sending me to a prescreening press event for The Zookeeper’s Wife. Read my interview with Jessica Chastain and director Niki Caro on Kelly’s site.

Bringing a Light to Autism – All Year Long

Since April is World Autism Month, I’ve decided to #LightItUpBlue to increase understanding and awareness of autism. We don’t just...