What’s it like to being all over again at midlife with not one, but two little boys? Jill Robbins loves it. Read more from Jill on her blog, Ripped Jeans and Bifocals.

My husband and I became empty-nesters in 2011. I hate when people say “empty-nesters.” It sounds sad. And old.

My daughter moved out. I got a promotion. We moved from the Midwest United States to England. To say 2011 was a year of change…well, that’s a pretty big understatement.

I looked forward to a quiet house, spur-of-the-moment weekends away, sex with the door open…and all of that stuff was nice, don’t get me wrong. It was like being newlyweds again. But, I felt a void. I think my husband chalked it up to lack of having someone to “do for,” to fuss over. Maybe that was a little true but I felt inexplicably directionless. My days were full and my life was busy, happy even. But something was missing. 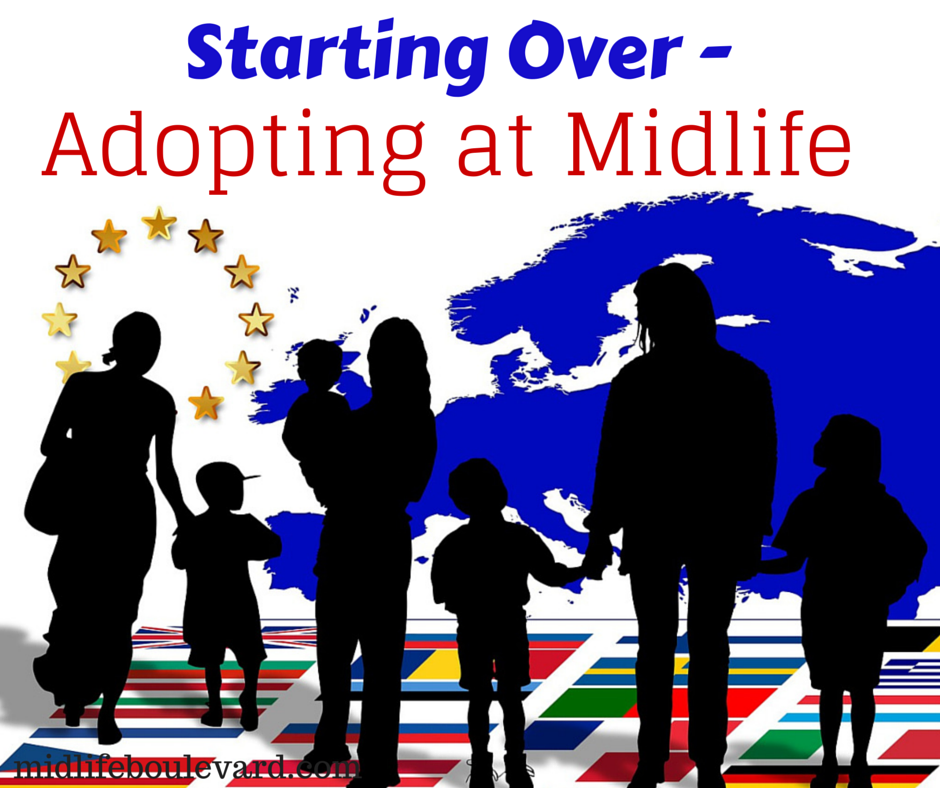 We’d discussed adoption when we first got married. We were older. My fertility ship had sailed into the sunset. We talked about how nice it would be to parent together in vague terms. These adoption conversations never really went anywhere.

I’ve always felt a pull toward adoption. My brother is adopted, as are several of my cousins. I looked into adoption as a single woman, before I met my husband but it was beyond my budget and, given what was going on in my life, probably beyond the scope of what I’d have been able to handle. Sometimes, the universe gets things right.

Shortly after we moved to England, I met another American, a woman named Jenny. She had a lovely Chinese-born daughter and the first time I saw them together, I had kind of an “aha” moment. I know that doesn’t make sense and as much as I’ve tried to rationalize it and articulate it over the years, I really just can’t. I can only say that when I saw Jenny and her daughter together, the path I was supposed to be on became a little clearer.

Jenny was kind enough to point me in the right direction as far as adoption agencies and paperwork went. The logistics of wading through the unholy amount of paperwork that is international adoption were a lot easier to digest because of her handholding and never-ending patience with my many, many questions.

To begin the parenting journey again at 45 and 49 was quite another matter. The paperwork was tedious and the waiting was agony but none of that compares to actually adjusting to having a new child in your family, when you’re a couple that’s a little set in their ways.

Our son Zack was 26 months old when he was placed in our arms for the first time and we were immediately thrust into a world of poop, snot, and loud toys. It turned our life upside down…in a good way. In a crazy tired good way. Our second son, Kyle, joined our family a year later. Today, we have two four-year-old virtual twins. Our boys are four months apart. Life is good. Life is freakin’ loud.

Becoming parents again at midlife has been interesting. We joke that it will either keep us young or drive us into an early grave. I use a lot more hair color and get a lot less sleep. But, I smile more and worry less about what other people think about how we live. We get a lot of “wow, how great it is you’ve adopted” with the unspoken “at your age.” I’ve even been asked if I was the grandma, which wasn’t one of my top ten life moments, but I made it through.

I’m not suggesting every empty nester’s answer to feeling a little directionless is to go out and have another kid, but for us…it’s working. Adopting at midlife has been the right choice for our family. My back creaks and squeaks when I bend over to give the boys a bath. When one of my boys informs me (and when I say informs me, I mean yells in my ear at close range) that it’s “no more dark” at the butt-crack of dawn, I realize exactly how old I am, down to the month.

There are all kinds of reason to adopt: not being able to have babies the old-fashioned way, wanting to “save” a child or just liking the idea of expanding your family with a child who needs one.

I wake up sometimes (usually at 3AM because there’s a little foot in my kidney) and marvel at the direction my life has taken. No, I didn’t expect this life in my almost fifties. But, I figure I’ve bought myself another 10 years or so of driving carpools, attending soccer practices and fielding “but whys” and defending “because I said so’s.”

Maybe not the traditional path, but it’s the path I chose. It’s my path. It’s my story. The rest has yet to be written.

Jill Robbins writes about adoption, motherhood and midlife on her blog, Ripped Jeans and Bifocals. She has a degree in social psychology that she uses to try and make sense out of the behavior of her husband and three children but it hasn't really helped so far. She enjoys dry humor and has a love/hate relationship with running. Her work has been featured on Babble, Scary Mommy, In the Powder Room, and Blunt Moms. You can also find her in the December print issue of Mamalode. She willingly answers any questions that end with “and would you like wine with that?” You can follow Jill on Facebook and Twitter.

What a fabulous decision to make in your 'middle years' and you describe it all so clearly. I also made a life-changing decision in 2011 which I would never have anticipated. Maybe it's because we have more confidence in ourselves as we get older? I wish you every happiness with your two kids.

Foot in the kidney...the nose...no boundaries! But it's all good!

Through all the pieces I've read of yours, I just now learned that your brother was adopted. This is such an excellent piece. You are blessed by those two boys (foot in the kidney and all ;) ) just as they are blessed to have you as their momma. This piece made my heart happy.

It has been ride! Thanks for reading!

I love the path you took, Jill and sounds like it was quite literally the perfect choice for you and your husband. Thank you so much for sharing more about ti here today.