Helene Hirsch Wingens looks back on the good, the bad, and – mostly – the ugly of raising three small children. Read more from Helene on her blog. 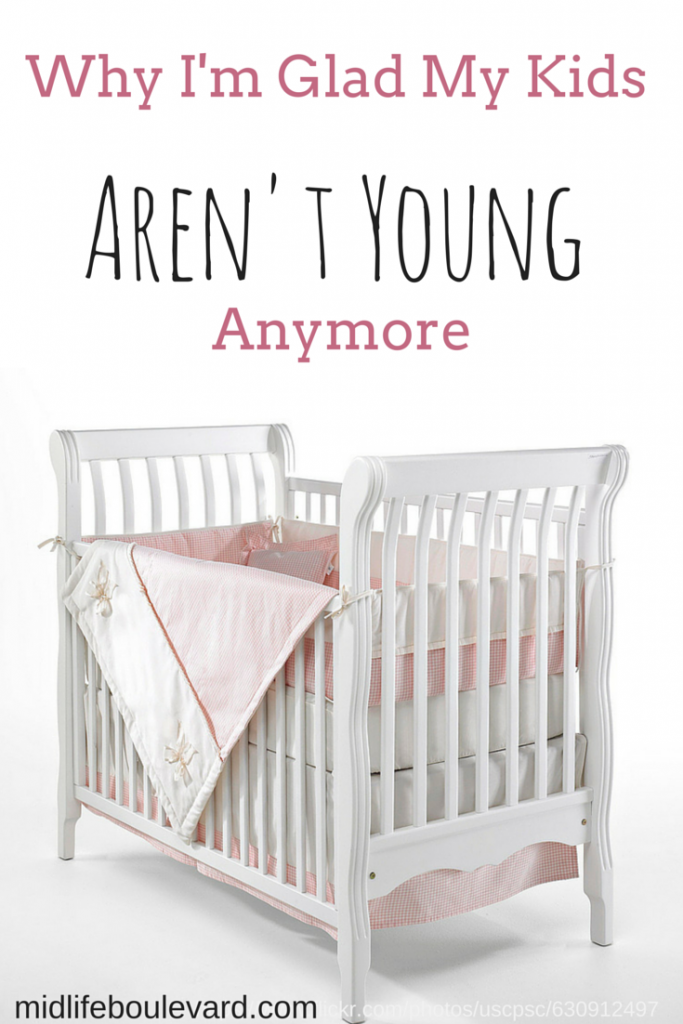 I’m a huge fan of Anna Quindlen’s writing. I recently stumbled upon an excerpt from her book, Loud and Clear, which was published in 2004. I was in the “thick” of child rearing back when I read it the first time and it made me feel guilty for not “treasuring” my children’s youth more. In the excerpt, Quindlen talks about how much she’s enjoying her adult children, but then she waxes nostalgic about her children’s babyhood regretfully saying,

“But the biggest mistake I made is the one that most of us make while doing this. I did not live in the moment enough. This is particularly clear now that the moment is gone, captured only in photographs. There is one picture of the three of them sitting in the grass on a quilt in the shadow of the swing set on a summer day, ages 6, 4 and 1. And I wish I could remember what we ate, and what we talked about, and how they sounded, and how they looked when they slept that night. I wish I had not been in such a hurry to get on to the next thing: dinner, bath, book, bed. I wish I had treasured the doing a little more and the getting it done a little less.”

Well, I’m of a different mind than Quindlen. I’m just thrilled that that moment has passed. Does that make me a bad mother? Maybe it does, or maybe it just makes me an honest mother. I’m a better mother to older kids than I was to younger ones. I found those early years to be physically grueling and endlessly challenging.

And, as for all the things Quindlen doesn’t remember, well, maybe that’s my problem, because even with my pathetically poor memory I remember all of those things in living color and with laser sharpness.  Let’s break it down:

I remember what we ate. How could I not? Although, it was barely recognizable as food, I scraped those food-like substances off the floor, the ceiling, the high chair, myself, and my children for years.

I remember what we talked about, the same things over and over and over and over. Did the kids once in a while say the most penetrating, insightful, adorable stuff? Of course. But, in the meantime did they prattle endlessly until I wanted to pull my hair out? You got that straight.

Most of all, I remember how they looked as they slept at night because those little bed hogs would often wake us up as they crawled into our bed. If memory serves, they looked like fully prone starfish as we, their parents perched precariously on the small sliver of bed left to us. And just as an aside, their body temperature was usually upwards of 120 degrees, making the bed more of a steam bath than a bed.

Is it ok to admit that looking at colleges blows away looking at cribs by about a thousand miles? Or that I would choose to grip the sides of the car in abject terror while sitting next to my sixteen year old novice driver rather than watch a two year old take his fiftieth spill from his Big Wheel as he goes up and down the driveway for the millionth time? The former may be hive-inducing but the latter is so excruciatingly mind numbing, as to be physically painful.

Forgive me if I’m just trying to look back without the rose-colored glasses. I can’t remember the good of it (and there was plenty good) without remembering the overwhelming difficulty of it.

I just don’t have a nostalgic bone in my body. Yet, as I look through old photos searching for a picture to insert with this post, I’m gobsmacked. Those babies of mine. Oh. My. Stars. They were so darn cute!!!!!

I get it. I was that mom. Thank God they're 11 and 14. I miss some of the memories, but not, generally, the ones from when they were under 8 months old. Loved this post!

I didn't have my first baby until I was 40 after trying EVERYTHING to get pregnant. I am now a grandma and even though I had a full time career during their years growing up, I home schooled for awhile and spent as much time as possible watching them grow. Probably because it was so hard to get pregnant, made every moment count even more? I loved every stage of their growing up years and now as a grandma, still working full time, I couldn't be happier watching my kids raise their kids. You are so right -- enjoy every moment at any age - and when they are adults, your relationship is even deeper.

I just love having both my kids grown now and loved it just as much when they were little. I am looking forward to being a grandma soon and can't wait for that next adventure too!

I am so with you on this one!! I adored my son from the moment he was born ... good thing, because without that I would have found those younger years completely intolerable.

He's 26 now, and I enjoy every moment we get to spend together. He's witty, charming and intelligent. He still calls on me to help, but the help he needs is much more along the lines of what I enjoy doing. I'm thrilled to do what ever I can for him; it's not anywhere near as difficult as it once was when he was a toddler or a young teenager.

I love having a grown up child; I just wish I could have more of them ... but that would've meant having more little ones, and it wasn't something I wanted to do at the time.

Why would this make us "bad mothers"? From a different view, doesn't it make us good mothers because we have never been inclined to coddle or do any other thing that might keep them "attached to our apron strings"?

I love Anna Q as much as the next writer, but, I have to say, this post cracked me up and was a refreshing perspective. I do have young kids (7, 3.5) and it's often a hard slog though I of course adore them. There is so much emphasis on mothers enjoying the moment and not wishing away time, that it makes you feel guilty if you don't enjoy it enough, or perhaps, for the women who have surpassed the era. So thank you!

My Preferred Form of “Female Viagra”

Leah Nyfeler knows what really turns us women on ... and it's probably not the little pink pill of "Female Viagra" the big...