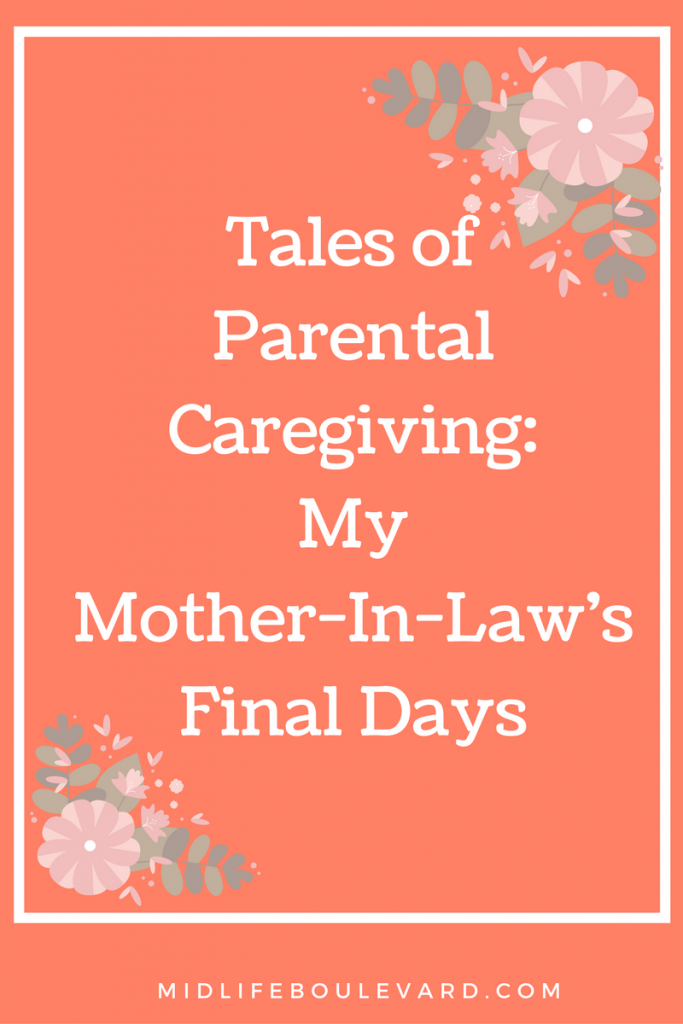 Roxanne Jones blogs at BoomerHaiku. This post was originally featured there.

My 80-year-old mother-in-law came to live with Hubs and me for what turned out to be the last six months of her life in 2004. Pat had lost her husband the year before to complications from Alzheimer’s disease, and was in year eight of her own struggle with metastatic breast cancer. Since Hubs was retired and I worked at home, we figured we could provide the care and support she needed at this stage of life.

When it came to mothers-in-law, I hit the jackpot. Pat was loving, demonstrative, outgoing, social, gracious and funny. Unfailingly upbeat, she never asked “Why me?” when her breast cancer recurred after nearly 30 years in remission. Abidingly proper, she referred to her remaining breast as her “muffin.” She accepted me with open arms because I made her son happy.

Having her live with us wasn’t without its challenges, however. Pat loved to talk. A lot. I’m an introvert who recharges my batteries in solitude, so her extrovert chattiness was probably the hardest aspect of living with her. But in the larger scheme of things, it was a miniscule price to pay.

To blow off steam, I’d meet some women friends for drinks about once a week. One of these evenings, I got home just as Hubs was serving the boneless chicken breast he’d cooked on the grill. And I do mean cooked. It was bone dry, and after a few bites, a piece got stuck in Pat’s esophagus. She could breathe and talk just fine, but it wouldn’t dislodge. As a result, she couldn’t get anything else down, not even water.

I called the hospital emergency department for advice, and the nurse suggested we call 9-1-1 to bring Pat in. My mother-in-law knew the drill; she put on her best robe, removed her jewelry, and awaited the paramedics’ arrival. They were buff young hunks in uniform, and they gave Pat the option of riding in the ambulance or in the car with us. She chose to go with them.

At the hospital, Pat was delivered to a private ED room while Hubs and I took care of the paperwork. A young clerk asked us questions and entered our answers into a computerized form. When we told her the reason for the ED visit was that Pat had choked on chicken, she looked puzzled and leaned over to her colleague in the next cubicle, asking, “Is choking on chicken an illness or an accident?”

Hubs and I took turns hanging out with Pat while we waited for the on-call gastroenterologist to examine her. There was a computer monitor in her room that—in violation of HIPAA privacy rules—had been left on, displaying a list of all the patients who’d been admitted to the ER that night, along with the reasons for admittance.

I couldn’t resist reading it. Among the entries were John Doe for myocardial infarction, Jane Doe for drug overdose and Robert Doe for ischemic stroke. Then there was Patricia Jones for choked on chicken. Not sure what the diagnostic code was for that.

The GI specialist managed to remove the offending piece of chicken and discovered Pat had strictures which had narrowed her esophagus. A simple endoscopic procedure to stretch it was scheduled for two weeks hence. Until then, she was restricted to a soft diet, and had to crush her medications and swallow them with applesauce. She was a compliant patient, and Hubs became expert at making smoothies (once she could eat solid food again, he also fine-tuned his chicken-cooking technique).

The next three months passed fairly uneventfully. We’d watch “Wheel of Fortune” before dinner each night, and occasionally we’d all go out to eat. Pat would regale people with the tale of how her son had tried to kill her with overcooked chicken. Hubs took her to doctor appointments. She dispatched me to buy her a special bathing suit to accommodate her prosthetic “muffin” so she could use the pool (we lived in southern California then). She loved to read, so we made weekly trips to the library. And she’d crack us up with her Gracie Allen-like malapropisms.

While reading a Tallulah Bankhead biography and marveling at the actress’s racy life, Pat shared with me how Hubs’ father had wanted to take her to a risqué movie back in the 1960s. When I asked the name of the movie, she replied, “I Am Curious George.”

Inevitably, Pat’s health began to worsen, and she needed to up her pain medication to handle the ache in her bones where the cancer had spread. Her appetite waned, she lost more weight and grew weaker. Then one morning, she suddenly began talking nonsense. We drove her to her oncologist’s office; he came out to the car to assess her, and arranged for her to be admitted to the hospital right away.

Tests revealed that she was in kidney failure, likely the result of years of NSAID use, high blood pressure and diabetes. Ironically, the toxins that her kidneys could no longer filter were now masking her bone pain. While dialysis was offered, her doctor was relieved when the family declined, respecting Pat’s written wishes for no extraordinary measures to prolong her life.

Pat remained in the hospital for a couple of days until we could arrange for hospice care. During that time she was her old animated, talkative self—but in a world of her own. She whispered to me that her oncologist (a Christian family man) wanted to sleep with her. Hearing the hospital sounds outside her room, she thought she was hosting a cocktail party and First Lady Barbara Bush was coming—and insisted that Hubs go out in the hall to greet her. And she warned us to keep an eye on one of her friends who was a tippler (said friend had been dead for years).

Hubs’ siblings—a sister and brother—arrived and we kept vigil during Pat’s last days. A lifelong Democrat, one of Pat’s final conscious acts was to vote for John Kerry via absentee ballot. The next day she slipped into a coma, peacefully leaving us on a sunny Saturday afternoon. One of the last things I said to her was thank you for raising such a great son.

In the nine years I’d been privileged to know Pat, she was a veritable force of nature, a perfect storm of love and laughter. The house was so quiet after she died. Hubs had lost both his parents in just 17 months. But like I’ve heard it is with childbirth, you forget the pain and remember the joy.

As Hubs’ sister said, “Our parents not only teach us how to live, but also how to die.” Pat did both with courage, grace and good humor, surrounded by people who loved her, and making us smile. When it comes to the latter, she still does.

When our parents die

God looks down at us and says,

“Next.” Make your time count.

Beautiful and touching. Thank you for sharing this with us, Roxanne <3

Thank YOU, Kim! I appreciate you taking the time to comment.

That was beautiful. Thank you so very much for sharing such a touching (and funny) set of memories.

Thank you for your comment, Lynette. Pat was such a special woman!

You’re Never Too Old To Define Your Life’s Purpose

Hélène Tragos Stelian is a blogger, author, life coach, and mom. On her blog, Next Act for Women, she shares...