Kim Dalferes went to her first NASCAR race. Here’s what she learned. Read more from Kim on her blog.

I’m a southern gal. Born and raised in the South. My mama’s family is from the South. My entire life to date has been lived in the South. However, I recently attended an event that despite my southern pedigree and upbringing had me feeling like a Yankee in King Earnhardt’s court. I experienced my first NASCAR race. 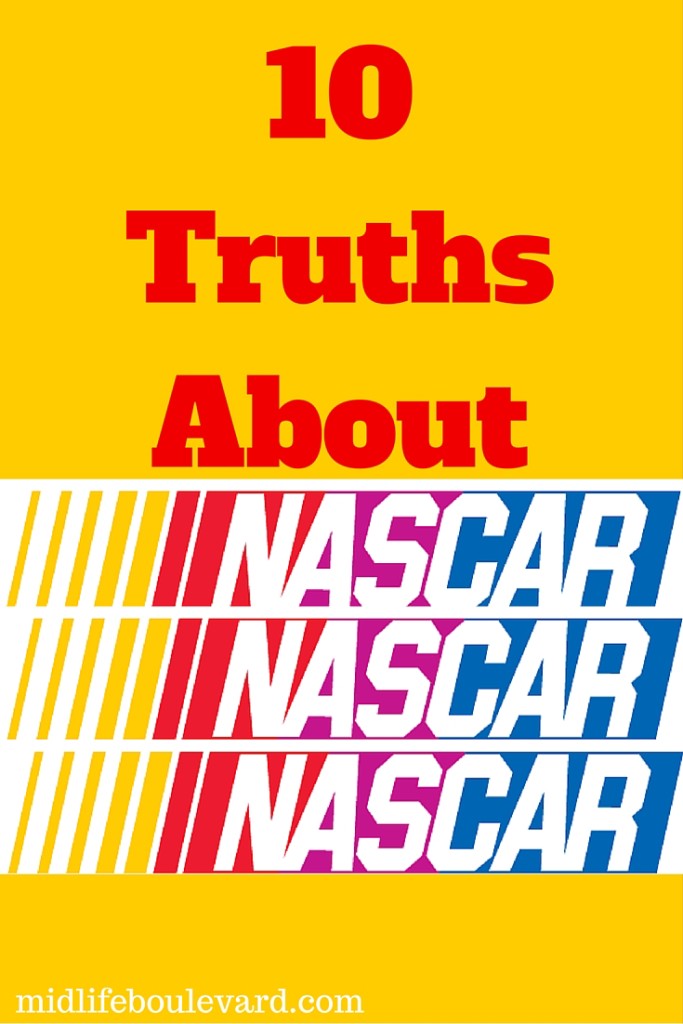 The National Association of Stock Car Auto Racing–NASCAR–is the governing body over one of the most profitable enterprises in the U.S. Since its beginnings back in 1947, NASCAR has grown into a behemoth of a sporting enterprise, broadcasting in over 150 countries and holding 17 of the top-20 attended single-day sporting events in the world (The History of NASCAR). Seventy-five million fans worldwide annually purchase over $3 billion worth of licensed products!

I thought I would share some of the valuable bits of wisdom I acquired from my expedition into the wilds of the NASCAR masses.

1. You’re going to need a hat. Everyone wears a hat. You can get away with a run-of-the-mill baseball cap, but why not go all out? Trust me, there will be plenty of vendors within a ten mile radius of the race track selling all kinds of merchandise. I purchased this bargain beauty for a mere 5 bucks!

2. It’s loud. Crazy loud. Check your style ego at the turnstile and wear the dorky headphones. For additional tips regarding what to bring with you, see NASCAR For Dummies Cheat Sheet

3. No one is on their cell phone. No checking Facebook or Twitter et al. I saw not a single electronic device out or in use during the entire race. Though tempted, I kept my I-phone fully holstered so as to not incur the wrath of the NASCAR purists.

4. They don’t really throw chicken bones. Apparently this is a myth created to make fun of  the NASCAR virgins. No one threw as much as a small drumstick at me. I’ll admit I was a little disappointed. I’ve discovered there is some truth behind this myth:

At most NASCAR race tracks, the backstretch is called “Chickenbone Alley” because these are usually the cheap seats. The term is derived from fans throwing chicken bones down toward the track during the race.

5. Pick a driver. Compare a NASCAR race to a college football game. In football there are just two teams–you pick your side and cheer your heart out. Well, in NASCAR there are up to 43 drivers on the track. You have to pick someone to root for, otherwise it’s just a bunch of cars driving in circles and it gets really boring really fast.

6. It ain’t that easy. I had not expected racing to require so many tactical techniques. When to pit, re-fuel, get new tires, move to the top or the bottom of the track, etc. are all important strategic decisions.

7. Not a safe haven for feminists. I lost count of how many times I was called sweetie, honey, baby, sugar, darlin, etc. Go in with your eyes wide open here. The language is unapologetically salty. One big fella sitting behind us in the stands relished in telling the most sexist, dirtiest jokes I have ever heard. Truth be told some of them made me snort. He led a raucous one finger salute to Danica Patrick–currently one of the few female drivers–when she flamed out of the race.

8. Silver-lining moment. NASCAR may be the only sporting enterprise in the world where the lines for the men’s bathroom are longer than the queue for the women’s bathroom.

9. You can bring your own food… and booze! In the cooler next to the PB&Js, chips, and Oreos, you can legally ice down a six pack and bring it into the stadium. And they wonder why NASCAR fans are known for being hammered?

10. Don’t worry, they are making money. Trust me, surrounding the stadium you will find a sea of purchasing opportunities. Every driving team has a merchandise trailer and the concession stands do a brisk business. No one was crying over our lil ‘ol backpack of Bud Lights.

Kimba Dalferes is a native Floridian, but currently pretends to be a Virginian. She is an accomplished king salmon slayer, estate sale junkie, and sometimes writes books. She is currently working on the sequel to her first book “I Was In Love With a Short Man Once.” This next book, “Magic Fishing Panties” will be out in 2015. She divides her time between Fairfax and Smith Mountain Lake, Virginia with husband Greg and occasionally her son Jimmy; when he is home from college. She also hangs out in The Middle-Aged Cheap Seats .