Makeup optional? Mammogram reform? The matriarchal society that Vikki Chaflin has dreamed up sounds like a world we’d definitely want to live in! This post originally appeared on Vikki’s blog, Laugh Lines. 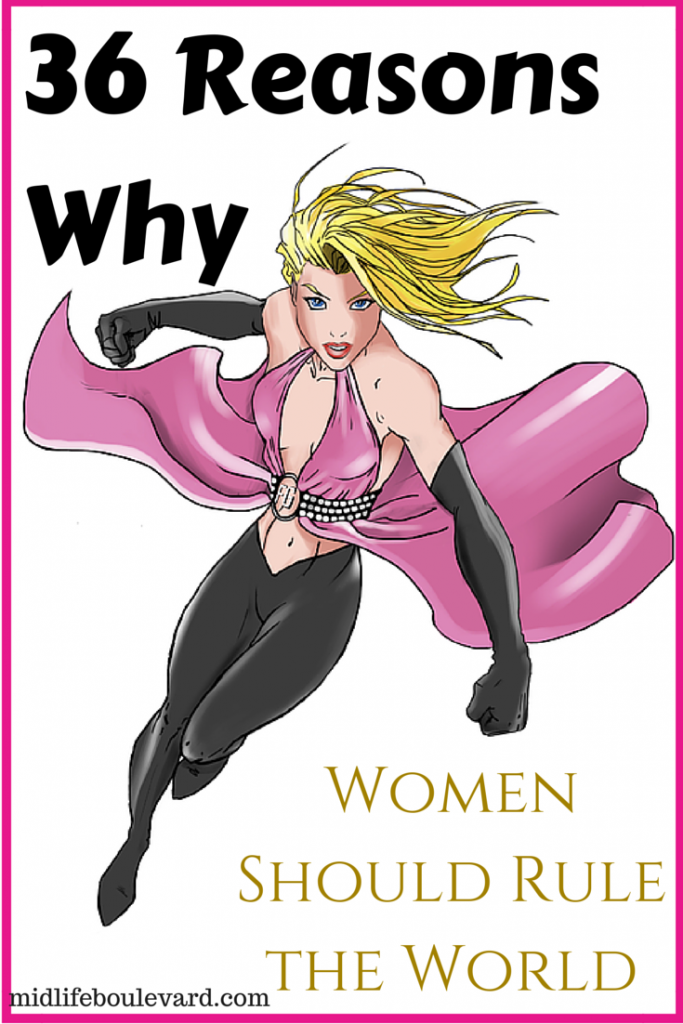 I came across this quote one day that instantly had me laughing out loud, and my brain began writing a post even before I rushed down the hall to my office:

“Can you imagine a world without men? No crime, and lots of fat, happy women.”
~ Marion Smith

After much not-so-serious thought, and a few hilarious phone calls to girlfriends who I knew would have an instant contribution, here’s my picture of what life would be like if women ruled the world:

1. A good glass of wine would cost no more than a beer. Just because you can’t belch it, doesn’t mean it needs to be twice the price.

2. Women’s haircuts would cost no more than a man’s. My hair and Hubs’ are roughly the same length. His price: $14. Mine: $42. Equal pay is pointless if we’re not being equally charged for services.

3. It would be illegal for fashion designers and photographers to use pre-pubescent twizzle sticks to model their clothes. Real-size, adult models, or no runway show for you, buddy.

4. Makeup would be optional. Always.

5. Store mannequins would include sizes 8-12. And in regular department stores, not just “plus-size” boutiques.

6. Yoga pants would be acceptable attire anywhere. You’d never again hear us say “We’re not going. I don’t have anything to wear.”

8. Stilettos would only be sold in the lingerie department, as bedroom wear, and shoe designers would be required to include fabulous flats as part of their line. Roughly half the female population doesn’t wear stilettos at work. Keep up, shoe people.

10. All scales would be calibrated at the manufacturing site to display five pounds less. We won’t tell if you don’t.

11. Health insurance would be required to cover massages, housekeeping services, and wine tasting in lieu of therapy. I’m 58. I don’t need prenatal care.

12. Fashion designers would have to manufacture their new lines in a full range of sizes, including those over size 12. I know it’s adorable in a size 2, but we can’t all fit into an adult onesie. Get real, you guys.

13. All gas stations would be manned by gas jockeys (no more self-serve crap), preferably hired from the Chippendales company.

14. Men who slept around would be considered tramps, while a woman who did the same would be applauded for her social skills. It’s takes a lot of finesse to take out every guy in your office. You go, girl.

15. All firemen would look like the guys in the calendars. Men want us to look like Sports Illustrated swimsuit models. Is this too much to ask?

16. If you slept with your boss and you got fired, so would he. What a concept.

17. Women would be paid the same as men for any job. No exceptions. Duh.

18. “More” magazine would have an annual swimsuit edition, with male models in banana hammocks. Yep, guys, we’re visual too.

20. Bars would check men for wedding ring tan lines upon entry, and provide loaners if he “forgot” his own. Better yet, call his wife.

22. Once a year, men would make chocolate and wine trays for us, while we group binge on “The Good Wife.” After 14 years of weenie wraps, chips & clam dip bowls we’ve made for you on Game Day, this seems fair.

23. Hiking up to the third-floor wine bar at Nordstrom would be considered exercise. It’s three floors. With shopping bags.

24. Height and weight charts would be calculated by women, and allow for age, childbirth, and menopause, thus eliminating all guilt over those “last 15 pounds.”

25. The DMV would offer at least two choices of photographs for your license. If we have our eyes closed or we look tired, we want a do-over.

26. Cookies would never add more weight to your body than they weigh in your hand. Simple math.

27. Toilets would never flush while you’re still seated. One should never be scared of one’s toilet.

28. Dressing rooms would always have a mirror inside the room. We’re tired of having to stand in the middle of the store in clothes that are too small, too tight, or that hang our back fat out for the public viewing.

29. Mammograms would be performed without having to flop our boobs onto a metal plate and then smashing them with a vice. We’ve never known a man who had to slap his weenie onto a piece of cold metal and then vice grip it to check for abnormalities. There’s got to be a better way.

30. Men would memorize “Have you lost weight?” “What other woman? You’re the only woman in the room,” and “I’m sorry, I won’t do it again” as standard, unwavering responses to most of our questions.

31. Men would go through menopause, with hot flashes, sweats, and mood swings. We’d get the midlife crisis, the new Corvette, and the hot young trophy date.

32. There would never be more than a 10-year age gap between a leading man and a leading woman in any movie.

33. Media news stories about important men would start with a critique of his last haircut.

34. Men would no longer believe that their cars and careers take work, but their marriages will maintain themselves.

35. Overweight men would have to shop at plus-size stores. “Hilo Harry’s, Men’s Muumuus & More” would be the go-to spot for chubby hubbies.

36. Spanx would introduce a men’s line that all men, other than 20-something Hollywood hunks, would be required to wear so we wouldn’t be subjected to their droopy man boobs and belly jiggle.

This is the best EVER!! I have to share on FB!!!!! Thanks for the laugh this morning while I'm at my desk slaving away!

Career Reinvention: A New Me at 62!

Today is my birthday and I am so pleased to share it with my readers here on Midlife Boulevard and...