Overdue library books? That knocking on your door may be the Library Police. A little librarian humor from Roz Warren.

A Texas man was recently arrested for failing to return a GED study guide to his local public library. He’d kept it out for three years.

This is the kind of news story that brings joy to a librarian’s heart.

The library where I work just installed a super-expensive state-of-the-art security system that utterly fails to stop anybody from stealing anything, because it beeps, incessantly and seemingly at random, throughout the day.

It beeps like crazy when people ENTER the library.

(When they look at me, confused, I explain, “it’s saying ‘Welcome to the Library!’”) 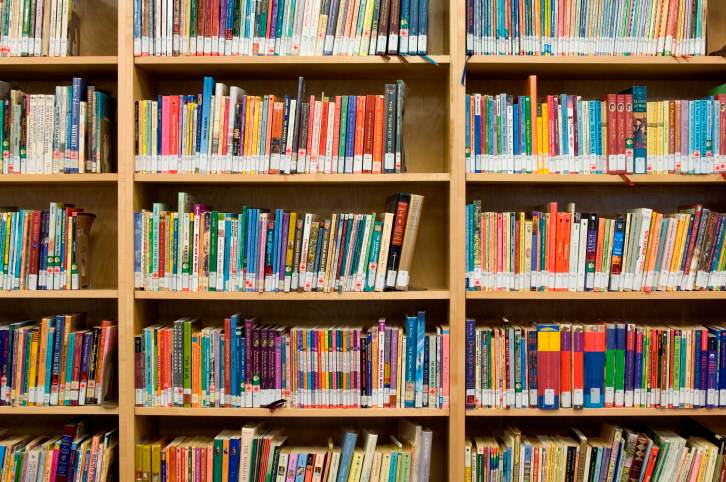 After fifteen years of library work, this is what I’ve learned:
(1) Most library patrons are decent, honest, honorable people who wouldn’t dream of stealing from us.
(2) The scum who do want to steal from us will do so and can’t be stopped.

Within moments of our installing any new security system, they’ve figured out how to defeat it. They just tear off the security tag. Or hold a book aloft, just out of the reach of the security sensors, as they leave. Or they just breeze past the warning signs and zip out the side door. A loud alarm will start caterwauling, but by then they‘re halfway down the block, confident that a group of indignant middle-aged women with Masters Degrees in Library Science can do little to stop them.

And then, of course, there are people like that Texas library patron, who help themselves to your collection by checking material out and keeping it.

A while back, a woman applied for a library card at my library, received it, then checked out our entire astrology section and carried it off forever.

She ignored all of the polite overdue notices we emailed her. Then she ignored the many fretful mailings the library dunned her with.

Something else I’ve learned, working at the library? Dunning an unrepentant book thief is a complete waste of postage.

And, of course, she never darkened our doors again. Why would she? She had what she’d come in for.

Those astrology books were hers now.

She was an astrology buff, so maybe she was just doing what that day’s Horoscope had told her to do. “You‘re a Virgo and your moon is in Saturn? This is a good month to steal library books.”

My supervisor, who takes this kind of thing seriously, stewed about our astrology book thief for weeks. She longed to phone her up and say “Shame on you! Return our books this minute. Or else.”

But that goes against library policy, so her hands were tied.

This news story out of Texas, though, has inspired us all. Now we have dreams of turning up on our book thief’s doorstep.

Library Squad! A group of enraged middle-aged librarians. We’re brainy. We’re relentless. We’ll hunt you down. We’ll never give up.

We know the Dewey Decimal system and we’re not afraid to use it.

And we always get our book.

And if you resist? We’ll shush you. Permanently.

Alas, unlike the lucky librarians in that Texas library system, we aren’t allowed to aggressively pursue our purloined books. Our policy is to ask for them back, nicely. (Sounds like a policy dreamed up by librarians, doesn’t it?)

Most libraries dunn their patrons, which we do. Some then turn the matter over to a collection agency. Which, alas, we do not.

Only a very special few library systems go so far as to have their patrons arrested and hauled off to jail.

But I don’t know a librarian who doesn’t wish that her library did.

If we can’t arrest these miscreants, I’d settle for being able to shame them on the library’s Facebook page. Or establishing a Bad Patrons registry for the worst offenders.

Even gently mocking them via a Twitter feed would help.

But ours is a gentle, kind, library system. We don’t actively pursue or publicly shame our patrons. You can help yourself to all the books, magazines and movies and audio books you want. We’ll never show up at your door with an arrest warrant.

Go ahead! Check out the entire library and keep it forever! Nothing will happen.

Maybe it’s time for me to move to Texas.

This essay first appeared in the Broad Street Review.

Your friends and family will love this low-calorie berry dessert. If you’re short on time, this big on flavor dessert...