The movie business is notorious for chasing the young audience. From animation to superheroes, the biggest and most profitable films are primarily the ones that appeal to teens or families with young children. It’s not easy for me to find movies that I want to see for most of the year – indeed, it seems I spend the entire months of November and December seeing all of the “grown-up” movies that are released just in time for the awards season. Summer is an overload of action films, 90% of which I’m not interested in. I end up watching more movies on demand or on Netflix, smaller independent films or documentaries that never see the light of day in a movie theater within 30 miles of my house. 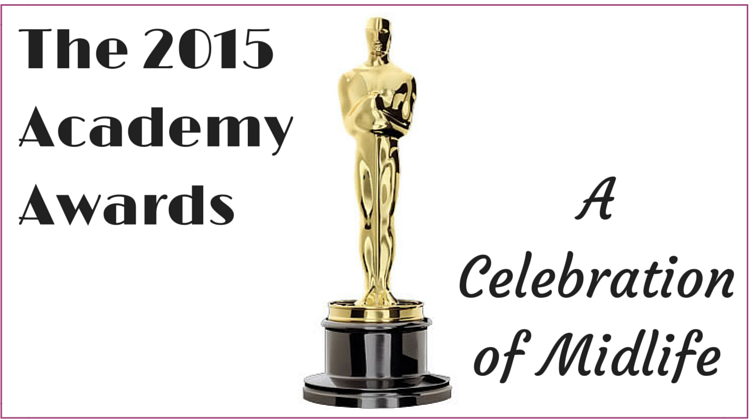 That’s why it was so great that this year the Oscars were all about midlife. It’s not just that 3 of the 4 acting awards went to performers who are 45+ (Julianne Moore, J.K. Simmons, Patricia Arquette). Best Picture winner Birdman is the story of a man in the throes of a midlife (career and personal) crisis. While not universally liked – in fact, many hated it – it speaks to the feeling that so many at midlife have of becoming invisible and irrelevant.

Boyhood, the film that was a close contender for both Best Picture and Best Director, may be about a boy growing up, but one of the most poignant scenes was the one in which Best Supporting Actress winner Patricia Arquette, who plays the boy’s mother, laments the fact that with him leaving for college she is losing her primary job in the world – being his mom. She breaks down in tears as she expresses the sense of overwhelming loss she feels that it’s all done –  the years of raising her children. That’s a midlife experience so many of us can understand.

Julianne Moore in Still Alice gave a stunning performance as a 50 year old woman diagnosed with early-onset Alzheimer’s disease. Though we often joke about growing forgetful as we head into midlife and beyond, the reality of what could happen to someone just like many of us – 50-something, healthy, smart – made for a compelling story.

And J.K. Simmons – a journeyman actor (he’s on television as the Farmers Insurance agent) who has had many small parts in big films over the years (his portrayal of the father in Juno stands out) was the Best Supporting Actor winner for his part as the music teacher in Whiplash. Finding such great success at midlife makes it all the more sweet, I would think.

While most of the presenters and performers were on the younger side, the most inspiring and exciting part of the show was watching Lady Gaga sing a medley of songs in honor of the 50th anniversary of The Sound of Music. While the Best Song nominees were all good – “Glory” in particular was so well done – Gaga’s performance was something else all together. Her voice, paired with the familiar and brilliant Rogers and Hammerstein songs, ushered in a new Lady Gaga who I anticipate will continue to surprise and amaze us. And when Julie Andrews came on stage – an icon and a part of all of our childhoods – those of us old enough to remember the excitement of watching The Sound of Music on television each year felt a nostalgic tug at our hearts.

The Academy Awards are said to be the domain of old white men – and while that may be true, this year it belonged to the middle-aged, both men and women.

It IS great to see more mid-life representation in film! The challenge now is for Hollywood to create a culture that embraces a mid-life hero/heroine as a norm. It is easy to elevate the pathetic figure because it tugs at some emotion but to allow for a powerful, complicated, non-bitch female protagonist or a male non-superhero/villan (or fool) takes a willingness to go against youth obsessed, popular culture-a creature of their own creation.

I gave up cable 5 years ago and the only time I regret it is Oscar night....

Enjoy your writings! Love the perspective.

Yes, Gaga blew me away. Was an awesome event for sure!