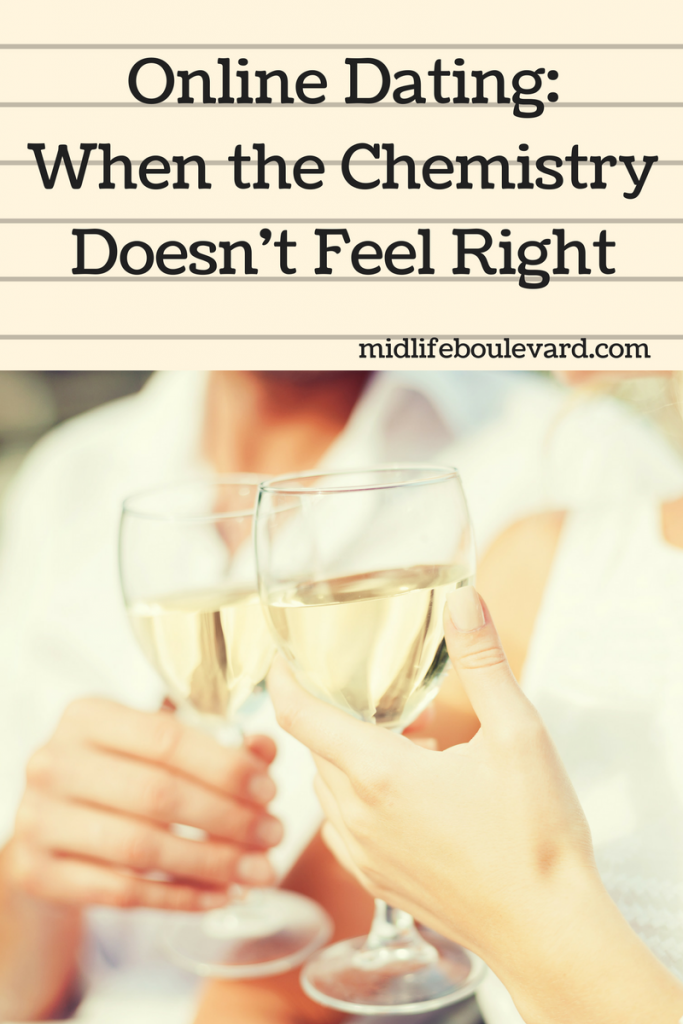 I’m not feeling the chemistry he writes. More specifically, “… I must confess I did not feel sparks of high charged chemistry.” He is the latest guy I’ve met on OKCupid, an online dating site, a popular place for online dating after 50.

We exchanged a number of emails, talked on the phone, then met for dinner two weeks ago. He knew in advance that I make a living writing and talking about midlife sexuality. Men handle that information in different ways—some think I’m advertising my sexual availability; some get a little freaked out about it and don’t want to meet me. This guy fell right in the middle. No big deal, just a woman with an unusual career.

Dinner went very smoothly; we had good conversation and a nice couple of hours together. A warm good night hug, but no kiss. I felt like I’d had dinner with a new good friend; no sense of whether I’d want to pursue intimacy with him at some future point. Apparently he felt the same. The next morning we processed the evening in a few emails in a refreshingly open way.

Many folks hem and haw about how they feel about a date and are uncomfortable sharing feelings, or giving honest feedback. It’s difficult to say, No thanks, you’re not my type. And far too many men, and women I suspect, would rather just disappear than do the polite thing. I try to be politely honest when I don’t feel the kind of attraction that’s important for me in starting a relationship.

And here’s the tricky part, we want to feel attraction to someone, but that doesn’t mean it needs to be “highly charged”. Attraction and affection can grow over time. And sometimes the absence of a sexually charged attraction is a good thing! We have to be willing to keep exploring and be open to what develops–or doesn’t.

Some people using online dating after 50 as a way to find people for sex. They spend time assessing their chances rather than trying to get to know the other person. It’s perfectly acceptable to want sex. The key is to be open about that from the beginning. If sex is the goal then instant attraction is pretty important. If you are looking to build a long-term relationship then starting slow has advantages.

Admittedly I have rushed into a hot embrace too quickly, only to find that there was nothing else beyond the sexual. Spending time getting to know one another is important. The more you know about a person the more likely it is that sexual attraction will develop. At the same time you’re laying the path for a better sexual experience because you’re growing comfortable with each other and building trust—both of which can make sex more enjoyable.

So, where did my friend and I end up? We realized that our conversation about sexual desire changed the tone of our evening. He was viewing me as the sex expert, rather than his date. We’re both willing to see each other again, but understand that you can’t force something if it’s not there. Fortunately he can handle talking about emotional issues easily.

Online dating after 50 and beyond can work, but it takes effort and a willingness to step outside of one’s comfort zone. Finding an older man who comfortably talks about his feelings is a huge plus. I have no idea where we’ll end up and that’s part of the adventure. And, it is an adventure—sometimes rocky and sometimes filled with delightful surprises. So far this one is off to a good start.

Want to read more from Walker about online dating after 50?

Once A Parent, You’re Always Parenting

This post was written at the end of the summer, when Courtney noted on Parent Tango that many parents were...