We live in a world where opposites co-exist: light and dark, yin and yang, good and bad, up and down. According to Taoism principles, opposites in nature exist to balance all things. Rain cools. Heat dries.

Paradoxically, it could be argued that these opposites actually create the whole. It’s the principle of oneness which argues: What is in the one is in the whole. Or, so above so below.

I am thinking about this as America commemorates Holocaust Remembrance Week from April 27 to May 4. I am not Jewish. But I am a human being who feels remorse for the systematic slaying of millions of innocents during the Holocaust and the collective wound I think we all share as a result. Even if we’re not conscious of it.

We might not even be aware of this truth.

All of this hangs out in the ethers as a reminder of what we’re capable of as humans. And while it may appear invisible, out there in the ethers, this darkness often manifests into form in the visible world, even in our personal worlds.

And let’s ask ourselves: Where are we at war with ourselves? What wounds do we carry from childhood into new relationships or into everyday life that keep us victims to the past, or worse, turn us into perpetrators who do violence to ourselves? Where do we become entitled, righteous and angry in our political or religious beliefs and sync up with “like-minded” people to rage against those who differ from us?

Fear is the enemy. And it’s opposite–love–is the healing balm. 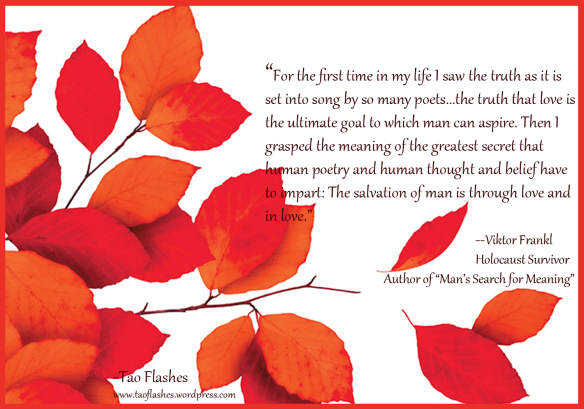 So, today, I am choosing love, while still shining the light on what was a dark period in history. There’s plenty more to look at–past and present. Like slavery. Or the Rwandan genocide. This year is the 20th anniversary of the Rwandan genocide where 800,000 people were murdered within 100 days while most nations closed their eyes and wrung their hands in disbelief. Right now, Syrian forces ( government or rebel, which ever side you believe) are using chemical weapons on their own people.

There is a price we all pay for war, war of any kind. It matters not if it is in our backyard or across distant continents. Because what happens out there will happens within us, if we are not aware.

The pain and displacement of war invade us all, snaking through invisible boundaries to infect our spirits and psyches.

Now one might argue that what is within us, is what is projected outward to manifest distrust, betrayal, war. But I believe it works both ways. The darkness comes to us and it comes from within us.

So above so below.

So choose love as much as possible. Practice peace. Pray. Work on your inner world, in the hopes that somehow, someday, we might affect our outer world.

If what is in the one is in the whole or the all, then let it be love.

“Peace in the city,

Peace in my home,

Peace in my heart,

If you’re interested in more thoughts on integrity, compassion and grace, particularly at midlife, read my book Tao Flashes.

Please note that some links in this post may be affiliate links.

Lisa Froman is a writer, poet and communications professional based in Baton Rouge, La. Lisa has worked for nearly 30 years in the communications industry, primarily in advertising and corporate communications. She is the author of <a href="http://www.amazon.com/Tao-Flashes-Navigating-Midlife-Integrity/dp/1452561729/ref=sr_1_1?ie=UTF8&qid=1382636692&sr=8-1&keywords=tao+flashes">Tao Flashes</a>, A Woman's Way to Navigating the Midlife Journey with Integrity, Harmony and Grace. It's an inspirational book loosely modeled on the teachings and wisdom of the Tao Te Ching, an ancient Chinese classic written more than 2,500 years ago. Lisa took the wisdom of the Tao Te Ching and interpreted it from the viewpoint of a midlife woman to create an inspirational book filled with reflections on authenticity, integrity and grace, and affirmations to support midlife women. Her blog, Tao Flashes, focuses on spiritual and inspirational topics and people.

Thanks for running my essay on Midlife Boulevard. It's a heavy topic, but worth exploring, in my opinion.

Warmer weather just brings out the kid in me!  Always has. When I: Drink a rich, creamy vanilla milkshake at...