Nursery rhymes for midlife? Why not? Little Miss Menopause, aka Stephanie Lewis, knows how to find the funny in just about everything about being middle-aged. Read more on her blog, Once Upon Your Prime. 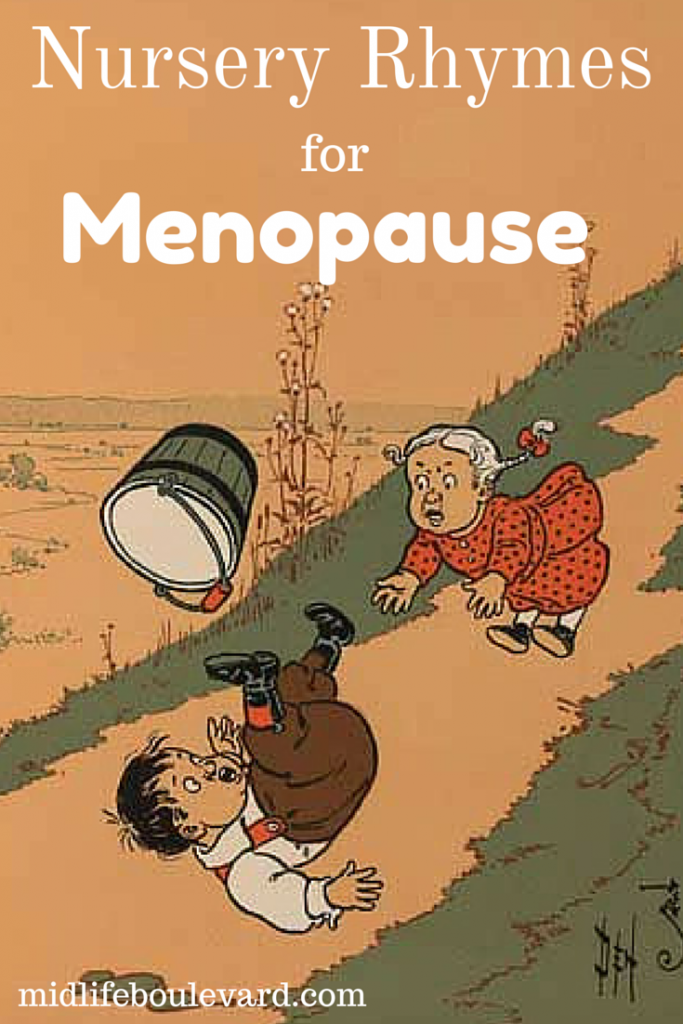 Fairy Tales definitely give “old Hags” a bad rap.
Let me walk you through an 18th century recap.

Did they have Hormone Replacement in those days?
Doctors to carry out the plastic surgery craze?
Supplements or Oils of Olays? Miss Clairol to cover grays?

Could women do a detox or get Botox?
Mommy Makeovers to turn back the clocks?
Could they buy Spanx to slenderize their frocks?
Was it hip to wear baseball caps over thinning locks?

Nope! Aging Queens were left all on their own.
Threatened by younger Beauties for their throne.

And always a chatty, magic mirror on the wall.
Reflecting back how gravity makes things fall.

So if you’re flaunting skin as pure and white as snow,
Your stepmother might just turn from friend to foe!

Singing like a nightingale all around the palace?
Yep, she’s gonna hire a huntsman with some malice!

Shiny, flowing hair to your ankles gives you seductive power?
She’s using Rogaine while you’re locked up in that tower!

She’s starving on Atkins and you nibble on her gingerbread cottage?
Well have a close-up look inside her oven….check out the wattage!

But for any fairytale to end happily ever after,
There’s always “Old Witch” karma, met with laughter.

Pushed over cliffs, stabbed in the heart, turned into a serpent or snake.
C’mon Brothers Grimm & Disney, they’re your menopausal moms — give ‘em a break!

Jack and Jill went on a date,
To see if they could get along.
Jack touched Jill and met his fate,
For everything he did was wrong!

I am a bitchy “don’t touch!” girl
It’s a pity how witchy I can be…
And all the boys in the neighborhood
Know how crazy sleeping is with me!

Mary, Mary, still eating dairy!
How does your stomach bloat?
With the way Brie smells, and those pasta shells
And 31 flavors all in a row… (not to mention a rootbeer float!)

Little Miss NapPlop sat with her laptop,
Searching for midlife online dating.
Along came a good provider,
Didn’t care she’d grown wider…
But everything he did was just irritating!

There was an old woman who lived in a Jimmy Choo.
She had so many symptoms, she didn’t know what to do.
She went to a conventional doctor, who examined her head,
So she went out with her girlfriends and drank wine instead!

This was hilarous! I laughed all the way through it!

Aww, thanks so much for taking the time to let me know!