Kim Dalferes can be found over at The Middle-Aged Cheap Seats, where midlifers come to sit, laugh, and “occasionally drink tequila”! A long-time football fan Kim is pretty excited about what she has to share here. 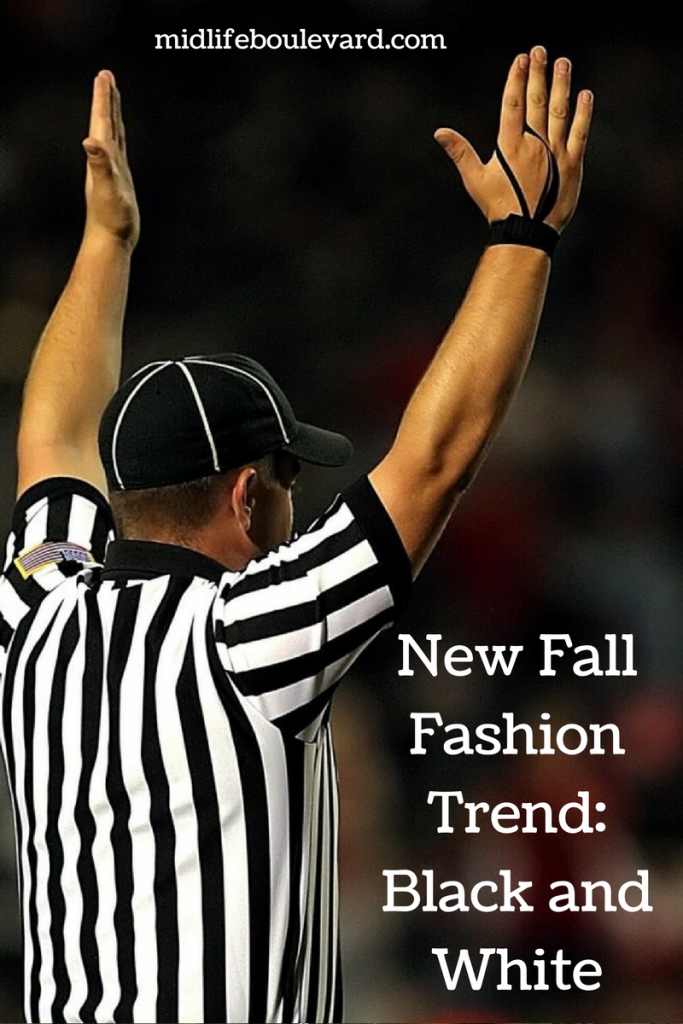 The running back weaves across the field with the football pinned securely in his right side. He dodges past a not-quite-fast-enough outside linebacker and streaks down the edge of the sideline toward the end zone. 10… 5… the ref throws his arms straight up toward the sky as the runner crosses the goal line. TOUCHDOWN!

What’s particularly remarkable and wonderful about this upcoming fall weekend tradition? That ref could be a woman.

The football field has conventionally not been a particularly hospitable place for women. Whereas we make up over 44% of the NFL fan base, we’ve had to be happy as spectators or cheerleaders. Don’t get me wrong: watching football, cheering for my favorite team, and Monday morning armchair quarterbacking are all personal faves. And I do understand that the physicality needed to play collegiate or professional level football is difficult for women (and most men) to attain – but not impossible. What I don’t subscribe to is the notion that somehow women aren’t capable of working as football referees or commentators.

“Falco, it’s nasty out there.”

In 2015 a glass ceiling of sorts, let’s call it a gridiron barricade, cracked a bit (I won’t say broke or shattered – it’s one ref out of hundreds so let’s not get too giddy here), when Sarah Thomas became the first woman in NFL history to officiate a professional football game. Being a pioneer was nothing new for Sarah: according to ESPN she also was the first woman to officiate a major college football game as well as a collegiate bowl game. For the record, Sarah has joined the list of women I’d like to invite to Kimba’s ultimate gal pal cocktail party.

It’s worth noting that women as football sideline reporters has become the norm, even the preference of most networks. However, this work is plagued by stereotypes that perpetuate the idea that sideline reporters don’t need to possess a proficiency in the sport of football. All that’s required is an ability to get a coach or a player to blurt out a few comments into the mic as they rush past. The term “sideline princess” is not meant as a compliment.

But I’ll let you in on a little secret: the gals are heading toward a football stadium near you. As common as it is to now see sisters-in-sports pacing the sidelines for a good angle from which to watch the next great play/player/coach, I steadfastly believe we’ll begin to also see more women referees and the advent of the female football commentator. For example, check out KNBR’s Kate Scott and her work as an NFL radio commentator:

It wasn’t so long ago that there were no female news anchors; look how that has changed. I’m living for the day (well, night) when the phrase “Are you ready for some football?” is asked by a woman in the Monday night football commentator booth. I envision a brigade of young women, armed with their communication and sports marketing degrees and knowledge of all things football, spreading out across stadiums nationwide, pushing their way into the press box and asking,

“So fellas, what do you think: flex defense or zone blitz?”

Have you ever been told you can’t do something based on your gender? How did you react?

I See My Younger Self In My Daughter

Courtney can be found sharing stories of motherhood over at Parent Tango where she and her husband offer a she-says/he-says...