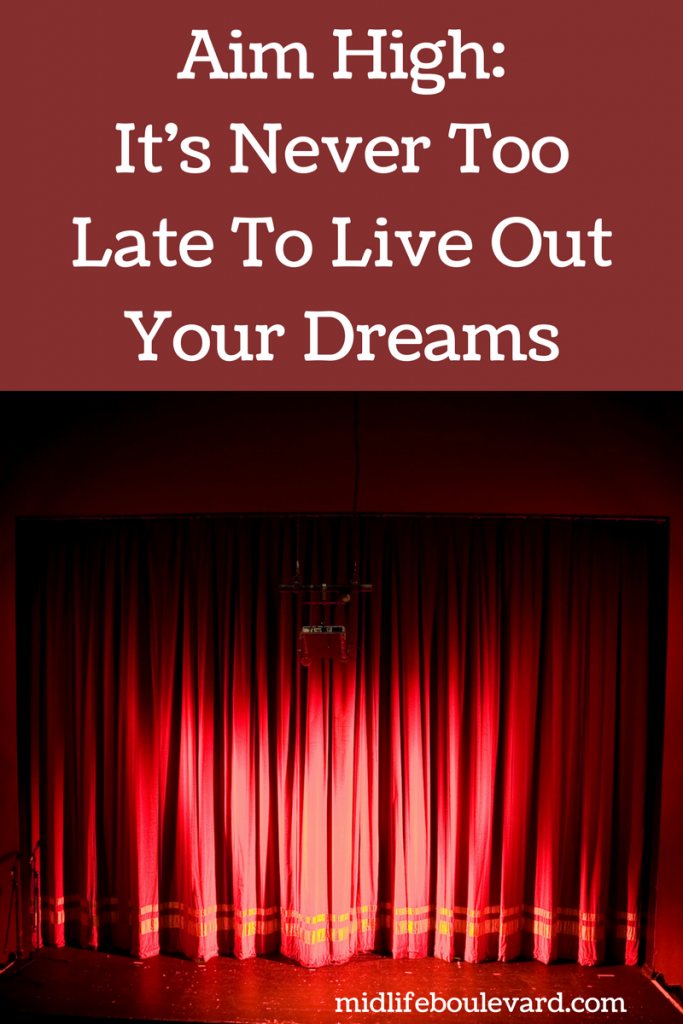 The anxiety builds the moment I arrived. I hesitate to jump out of the car. I stay seated gazing out the windshield and pondering that this just may be the stupidest idea I’ve had! I’m too old for this. I have no experience. I’ve never done this before. Why did I drive over here? All these thoughts roll through my head. An article in my local newspaper prompted me to consider the idea.

“Local actors wanted for a community interactive play. If you live in the area and are interested in having a role in the play, come audition and do a reading for us.”

The article had me intrigued. This is something I’ve always wanted to do. In high school, I’d go to plays that classmates were in and sometimes wondered about participating myself. I never did! Fear, insecurities and shyness got the best of me. All those days and years after high school, I kept that silly little dream in the back of my head. I figured I’d always enjoy others acting talents from the audience side of the stage.

I was in my late forties when I decided to go to that audition. Being older, wiser, more confident and with a “what the hell” attitude, I found myself in a nearly vacant parking lot sitting in my car contemplating my next plan of action. I didn’t tell anybody, not even my husband that I was going to audition for a play. If I had decided not to go through with it, then I’d only disappoint myself and not others. In case of rejection, there’d be less explaining to do.

What have I got to lose? What’s the worst that could happen? Maybe, that I’d suck and then I could finally move on from this acting pipe-dream.

Reaching For The Stars (To Become One!)

With a lot of self-talk, I finally got the nerve to get out of the car. While carrying a ball of nervousness in my stomach and a head dizzy of the unexpected, I walked into that audition and just did the best I could. Surprisingly, the directors were nice enough to tell me, for a person with no acting experience, I had done a pretty good job.

Crazy! You mean if I had done this year’s ago, I could be in Hollywood movies by now? Probably not! I think in life things happen for a reason. This, most likely, is the way it should be for me.

When I left the audition, I felt good. No biggie if nothing came from it; at least I took the first step, followed through and did it!  It was an exhilarating feeling.

Well lo and behold, I got the call back a few days later and they offered me a small part in the play. This news was like fireworks had just exploded in my head – excitement, waves of anticipation and visions of bright expectations. Really…you want me? Here it was. Opportunity staring me right in the face. Actually, it was pausing on the other side of the phone line waiting for an answer. Then, just like that, I said “I’ll do it, I’ll be there.”

I ended up getting the role to play a younger pregnant lady. Make sure you don’t skip over reading that part! Yes, you read it right. YOUNGER and PREGNANT! Was this good casting? Well, just so you know, it was a comedy.

My first-time acting experience was one for the memory books. I met some wonderfully nice people, had a fantastic fun time and learned a lot about myself.

When sitting in the car that day contemplating this crazy acting idea, I had never imagined at age 47, amidst midlife, that I could possibly be younger and pregnant again! It’s never too late! I’m learning that the first half of life is for learning; the second half for living! From my personal experience, it’s so true and that’s what I intend to do.

What dreams do you need to start living?

Find Laurie sharing more of her life with you over at A Square of Chocolate. This post was originally featured there.

Laurie is a wife and mother living in Minnesota and determined to uncover the second half of life with zest and zeal. She has a background in marketing and accounting for the last 25 years and recently discovered that one can’t live by adding machines and numbers alone. Therefore, she created a humor written lifestyle blog. Laurie is a food enthusiast, loves comedy and enjoys writing and creating a story with a humorous twist. Laurie has been a contributor to Erma Bombeck Writers’ Workshop, Midlife Boulevard and Sammiches and Psych Meds. Also, Laurie is a contributing author in the bestselling anthology, "Feisty After 45," published by Mills Park Publishing. Visit Laurie’s blog, A Square of Chocolate, and join in for a smile at http://www.asquareofchocolate.com/

That's AWESOME, Laurie! I love how one creative venture unfolded into the next.... Sounds like you are really enjoying life!

And yes, I am doing the same... Launching a new business that is allowing me to bring many of my tucked away talents to life and discover and develop a few new ones...

One small act of courage can take us to some bold places!

I loved reading your sweet story... and I really LOVED that you had the courage to follow through on a dream that has been packed away in your heart for so many years.. God ;bless!

I can only imagine the joy and feelings of confidence and pursposefulness that followed... So my next question is.. what's next? Will you keep with the passion or pursue yet another one?

Oh my goodness, Stacy, I can't tell you how it made me more confident. I went on to take an Improv class and from that class is when I discovered writing and my creative side that was longing to come out. Now, that I've started writing in my own blog, it's helped me to discover my purpose!! Next step: I will be taking some speech classes to fine tune my thoughts vocally. We'll see where it takes me....

Thank you so much for your lovely comments and well wishes. Hope you are pursuing your dreams too!

So glad Mimi! Hope you face your fears and follow your dreams! :)

Hey Laurie! Your words kept me enthralled to the end. Great story telling here. I could see you in my mind's eye In the car and on the stage. I give this one 3 out of 3 squares of chocolate!!

Thank you Dee for your supportive words and I LOVE the chocolate square rating. That was clever! ;)

This is awesome! We all need to go for what brings us joy! We are only here on this planet for such a very short time and it is foolish to waste any minute of it. Thanks you of sharing this story..

Renee, thank you for sharing your thoughts. You're right we must not waste time being afraid to do what we want.

Mastering The Art Of Public Speaking

Carol blogs about interesting topics like this one over at Battered Hope.   Public Speaking. Speaking in Public.   Speaking to a...