I’ve lived in California for a long, long time.   Give me a rainstorm, a mudslide, an earthquake–I can handle it. But no snow.

According to sophisticated population studies,  millions of people actually live in the upper Midwest.  And the vast majority of those people, despite the bitter cold and all that snow, manage to work and travel and get where they need to go.

But those facts didn’t comfort me when my son had to travel home from college in Wisconsin in the middle of winter for his first Christmas break.  When I turned into the neurotic Jewish mother from hell. 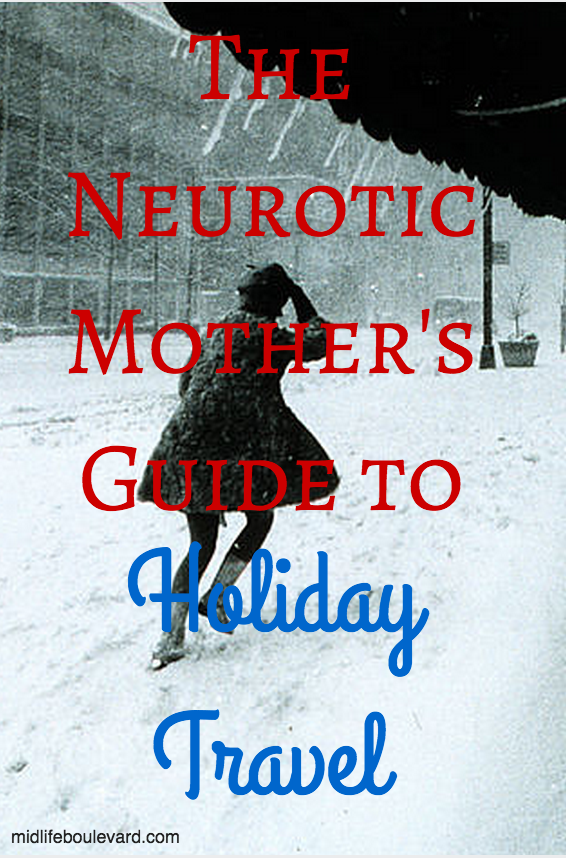 Before he was due to head home, I started checking the weather online.  I started checking TWO weeks before his trip.  Several times a day.   And in this way I learned that on the internet, you can check the weather forecast HOURLY.  What a godsend for people who really need to know these things—pilots or boat captains or cross country truck drivers.  What a nightmare for people like me.

So 10 days before Daniel’s trip, I started checking the hourly forecast in Madison, Wisconsin, where he was.  Also in Denver, where he would change planes.  And in Monterey, where I was living, and where he would land.

I knew the temperature.  I knew the wind speed.  I knew the humidity.  I knew the probability of precipitation.  I knew all these things in all 3 places that were on his route and exactly what problems he could have  potentially encountered.

This behavior was far more hazardous than the weather itself.

I mention to my husband V that Daniel was also checking the weather beforehand.  He was surprised that I had indoctrinated Daniel into my neurotic patterns.  And he gave me a look—like, How do you get through the day?

“I think it’s normal to check the weather reports,” I said.  “What would you do?”

I live with V so I knew this is absolutely true.  When V travels, he doesn’t check the weather where he starts or where he’s going.  He doesn’t check if his flight is on time.  He just goes.  Can life really be that simple??

Not for me.  Although I admit— sometimes I wonder if worrying sends messages out into the universe.  Could my worrying be powerful enough to change weather patterns?

Daniel gots to the airport in Madison and found out all flights were cancelled.  All day.

Of course I was prepared for this–which is the payoff for being neurotic.  While Daniel was taking his final that morning, unaware that his mother had interfered with atmospheric conditions, I spent the morning working on a backup plan.  And I got the last ticket on the last flight out of Chicago to the west coast.

This new route involved Daniel taking a short taxi ride from the airport back into Madison.  Then he would get a bus ticket, and take a 3-hour bus trip into O’Hare.  Simple.  He had plenty of time.

Daniel is a sophisticated kid, and extremely responsible.  My part was done.  Now I could sit back and relax, and pick him up at the airport in San Jose late that night.  Like a “normal” mother would.

I wish I could report that was what I did.

An hour or so goes by. I don’t hear from Daniel.  I really make an effort NOT to drive my kids crazy by calling too much.  So I didn’t.  I knew his phone battery is low.  I figured he was on the bus or waiting in his dorm to take the bus.  I think a normal mother would assume that, too.  So far, so good.

But then I started to cave.  The internet is a minefield for the neurotic.

I saw weather warnings about the fog.  Some flights in Chicago were delayed.  And I thought, maybe the fog would be a problem not only at the airport, but on the highways–and that meant Daniel’s bus headed for Chicago.  There could be heavy holiday traffic on the roads, plus fog–and that combination spells  a-c-c-i-d-e-n-t-s. (You can’t verbalize these things.  Not if you’re a neurotic Jewish mother.) Maybe Daniel should wait another day till the weather clears up, I wondered.  I didn’t even know if he was on the bus yet.  Probably he was.  But maybe not.  And that meant there is a possibility that he could stay in Madison, and avoid the potential c-r-a-s-h awaiting his bus on the highway to Chicago.

(Thank god I don’t live in a snowy climate.  The mental activity would be exhausting.)

Usually I manage to restrain myself from allowing my neurotic thoughts to leach out of my own brain.  Especially not onto my kids.  But sometimes there are setbacks.

I decided my fear of the highway outweighs my self-control and self-imposed vow of silence.  I text Daniel: How about waiting in Madison till the fog lifts? Skip Chicago and come home tomorrow. No answer.  Did that mean he was still in Madison?  Was he on the bus?  Was he already involved in an accident on the way from Madison to Chicago?

I waited another hour.  I switched into a higher gear and tried to phrase it like a normal mother would: Just want to know where you are and what’s happening.

Another half hour, the text sounded more like the real me:  I am not panicked….yet.

Meanwhile I was still clicking.  Checking the weather.  Checking his flight.  I hadn’t yet checked with the Wisconsin Highway Patrol for accident scenes–but it did cross my mind.

Finally Daniel texted me back.  He got a seat on the bus.  His phone battery was low.   He didn’t think I would worry.  He fell asleep and didn’t notice my text messages until he woke up.  He was already in Chicago waiting to board the plane home.  He did what a normal kid would do.

And finally I did what a normal mother would do.  I acted casual, and told him I’ll see him at San Jose airport later that night.

Darryle Pollack is a founder of the <a href="http://whoanetwork.com">WHOA Network</a>.

Darryle Pollack is a founder of the WHOA Network.

I'm exhausted just reading this. Is it odd that I found nothing unusual in this post? But, after all, we have been friends for 35 years... xoxo

I'm exhausted for you. My sister, who is neither Jewish, nor a mother, obsesses about the weather before she drives 7 hours to my house. As if she could control it. I feel bad for her. :) "Bless her heart", as they say down south. Well, being proactive and on top of the situation really DID help your son...so... as a sister-mom, I can say, "You did your job." Good mama.

I have a son driving from northern Kansas to Denver in December so I well understand the weather watching.