I had listened to her stories about how her life was nothing more than a series of bad-luck incidents. No luck getting the job she wanted, unlucky encounters with men, no one ever liked her and no one ever would, miserable luck in every area of her life; I heard it all. Sympathetic friend that I was, I listened for hours on end about how her life was miserable and that nothing, NOTHING!, would ever be good for her. My friend was always in some type of despair. 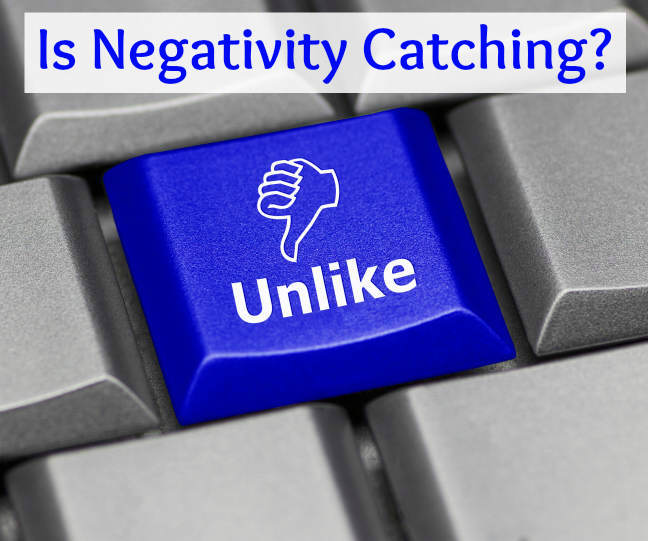 “I am just an unlucky person,” was her constant complaint. I was sad for her, felt a little guilty about any good things that were happening in my own life, and had no idea how to help her. Her negativity talk went on for months. After listening to her talk about her unhappiness and ‘bad’ luck, I found myself falling into a similar pattern of speech and body language. I wasn’t particularly feeling well after our talks.  The feeling was subtle but visceral.  It was a form of physical distress not focused on any particular part of my body–but it was present. I felt exhausted after speaking with her.

Suddenly a strange thing occurred in my life. I caught the “unlucky” flu! A writing project went awry, I took the frustration home with me, had a major disagreement with my husband, and began to feel miserable about myself. I found fault after fault with me. Maybe I wasn’t as good at my profession as I’d thought, maybe I would never really achieve all that I wanted, maybe I should rethink my relationship, etc., etc. I was becoming a very negative person. I was becoming just like “her”!

Where before I would pretty much find the humor in unexpected circumstances and set-backs knowing that they were only temporary, I now saw them as personal bad luck. I felt as if there was a black cloud hanging over my head ready to dump buckets of rain on me while others seemed to walk in sunshine. Headaches, a sinus infection, and fatigue were constants. I began to resent the happiness of other people! Was this dejected person the real me? I hoped not.

My friend had unwittingly infected me with the power of negative energy and it was affecting my own normally sunny mind-set. I was caught in the throes of a negative habit.

Everything you do in life becomes a habit. You brush your teeth, you exercise, you have your coffee. They are all physical habits. So it is with the mind; how you see and deal with situations becomes habitual. If you feel negative about things that are happening, that becomes your mind-set and that is difficult to change. It affects everything you do . How you feel emotionally and your attitudes in life are a significant factor in your health and well being. Our bodies are the manifestations of mental and emotional states of being. Negative, pessimistic individuals are capable of infecting those around them.  It can happen in the workplace and in personal relations with family and friends. The negative attitude is very, very contagious.

My negative thinking began influencing my daily life and it wasn’t pretty. I didn’t like me and I certainly didn’t like my way of thinking. I had to do something to get out of this way of thinking; I decided to try self-awareness and write down exactly how my friend’s negativity was affecting my work and relationships.

I found that when I spoke with my friend during the day, I was in a bad mood. Her constant complaints colored my work attitude. I felt guilty getting paid for doing what I loved while she was unemployed. Because I felt that way I was more prone to make writing mistakes. I also recognized that her negativity impacted my own hard-won success. When my first book was launched her half-hearted “Yes, that’s great”, colored my happiness and pride.

I was in a good relationship. As silly as it may sound, her unhappiness with her love relationships made me feel that it was unfair to her that my own love life was happy and healthy. I began to nitpick over stupid things in my own relationship.

She was oozing depression and I was caught in the muck. This had to stop.

I sincerely love my friend but in order to heal myself of the disease of negativity I had to limit my contact with her. If I was writing, I let her call go to voice-mail. I’d call her back when I was finished with my work but would limit the time we spent talking. I became tougher when she began her litany of complaints and firmly told her that she had to change her attitude about life and concentrate on what she really wanted. She had had a fantastic education and needed to focus on getting the job she wanted before becoming involved in a relationship.

And I began to focus on what I love to do for me. I made myself see that a few temporary problems in my work and at home were just that; temporary. I had to change a bad habit into a good one that worked for me.

My friend still calls me with complaints but I have learned how to not catch the negativity infection by not allowing her to focus solely on what’s wrong with her life. I try to steer her in a positive direction and if that doesn’t work then I gently tell her I can’t listen to the negativity any longer and that I’ll call her later. Sometimes it works.

Negativity is draining and I don’t want to live that way. All things being equal, I think that positivity can be as catching as negativity. Maybe if I’m positive enough, my friend will get infected by me. I hope so.

Hi Joy, Thanks so much for your comment. Thinking in a positive way is sort of like muscle memory. When we get back into exercising our muscles remember and act accordingly; they tone. It's the same with acting in a positive or negative way; it becomes habit and affects us in all ways. Negative friends can make us be negative too! I know I feel so much better being around positive people.

I loved how you pointed out, Kristen, that our mindset can be a habit too, just like anything in life. It's a good reminder for me to practice positivity more. I can relate to this experience because in the late 90's I had to sever ties with someone I had defined as my bestfriend. She was just too toxic and refused to change, and I felt like I was getting eaten up. I felt drained and began getting nightmares and suffered from lack of sleep, all because of her problems that she refused to do something about. Sometimes we are faced with really difficult choices but I always remind myself than in emergency situations like on an airplane, we need to put the oxygen mask on ourselves first. :-)