How to Use a Japanese Toilet 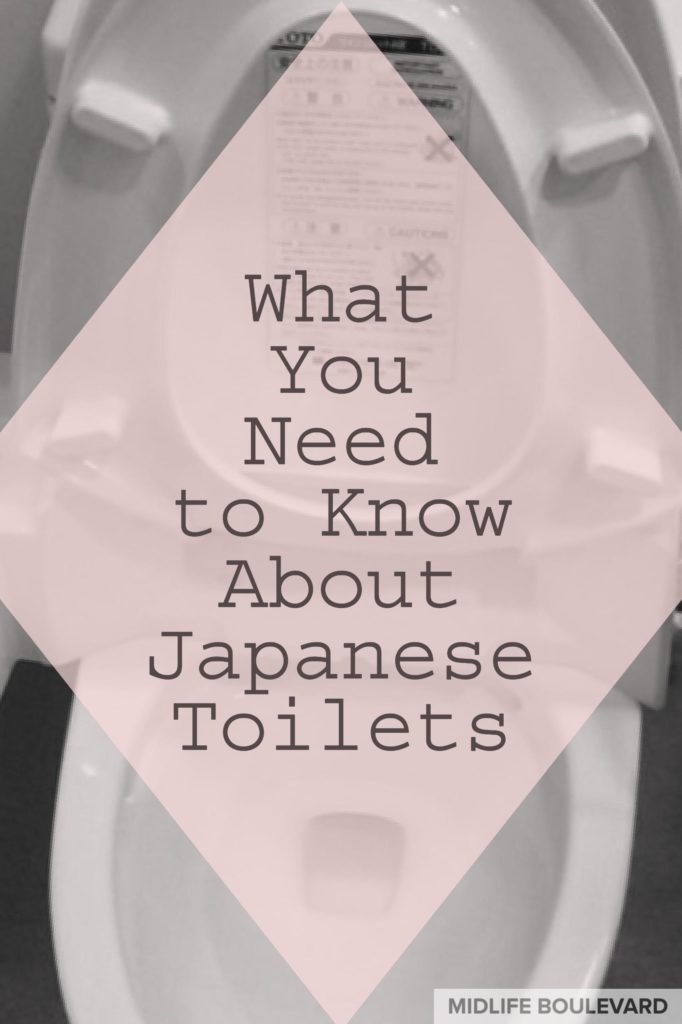 To help prepare you for your first trip to Japan, here’s what you need to know about Japanese toilets.

Upon deplaning at Tokyo’s Narita International Airport after a 13 hour flight from Toronto, Canada, I made my usual ladies room stop. This proved to be my first, “Toto, we’re not in Kansas anymore” moment of our trip. Coincidentally, Toto is the name of a popular Japanese toilet manufacturer.

Although my husband has cooled his heels waiting for me outside ladies rooms in airports all over the world, he could not imagine what was taking me so long.

I explained my discovery that using a Japanese toilet required some of the same skills employed in flying a space shuttle. There was a learning curve. I had to read the instructions! One is actually confronted by fine print with ominous looking diagrams on the back of the toilet seat.

The toilet had a control panel. I was quite sure it would not be prudent to just start pushing buttons before retrieving my luggage. I figured a change of clothes should be available before I tried any of the water features (i.e. bidet, shower–at any strength).

Actually, “flush” wasn’t one of the choices on the special control panel. That was “flushing sound”. Say what? I later learned that Japanese women can become embarrassed by bodily function sounds in public bathrooms, so Toto thoughtfully provides a “flushing sound” option to camouflage what might actually be going on.

Since we had not yet even cleared Japanese Immigration control, I decided it would be wise not to be messing with the buttons labeled only in Japanese. Really, why did they translate only some of the buttons?? Was it a case of, “If you can’t understand the labels for these buttons, you have no business using them”?

I admit I became somewhat obsessed by Japanese toilets throughout our trip.

I suspect I’m not the only gai jin (foreigner) to have photographed a Japanese toilet. Fortunately, most Japanese toilet stalls are completely contained little rooms, thus sparing one the questioning looks (or rolling eyeballs) from fellow bathroom users that a camera flash might otherwise engender.

Some Japanese toilets had more features than others. I mean, you never know when you might have forgotten your watch and mobile phone and need to know what time it is. 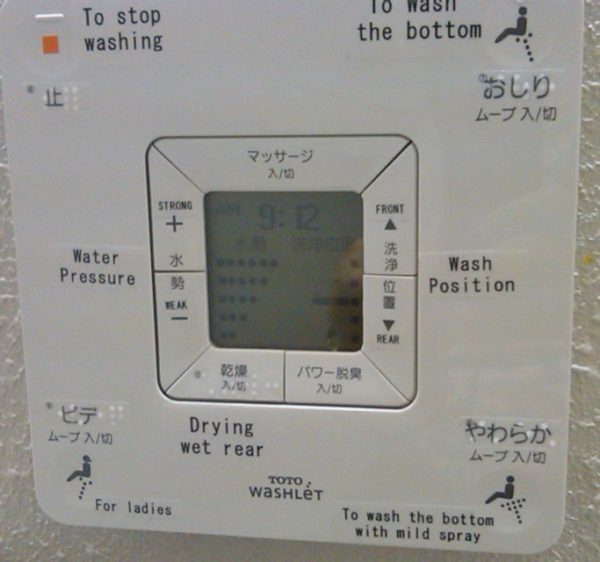 Some toilets were clearly designed to be used by both genders, creating the need for the control panel to identify which functions would correspond to the anatomic idiosyncrasies of each sex. It was a relief to know that I did not run the risk of washing my “bottom” with the guy spray. Apparently, the Japanese have determined that “drying wet rear” is a unisex function.

Although the Japanese have clearly forged ahead of the rest of the developed world when it comes to toilet technology, I did come across some bathrooms which appeared to be set up to cater to even the toilet technology challenged. There were little diagrams on the outside of the stalls identifying the type of toilet available within: one could opt for a trough in the ground (honest), a regular non-high tech toilet or a toilet with all the bells and whistles.

Finally, there was the sad day when instead of being able to visit the excellent (I’m told) exhibits in the Tokyo National Museum, aberrant gastro-intestinal activity forced me to confine myself to the museum bathroom. 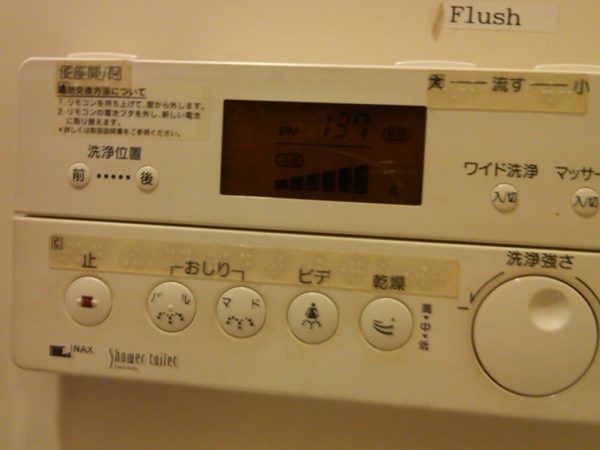 Japanese toilet control panel with which I was confronted in the Tokyo National Museum.

There I was, actually in need of some bottom washing (and drying), and sure enough, the toilet button labels were all in Japanese. Fortunately, this was towards the end of our trip when I was more familiar with Japanese toilet possibilities. So, I took a deep breath, figured the situation couldn’t get any worse, and went with my gut.

(Now that you understand Japanese toilets, you can read my take on Japanese food: Do You Want Salted Fish Guts With That?

Have you had any confusing toilet moments anywhere during your travels? 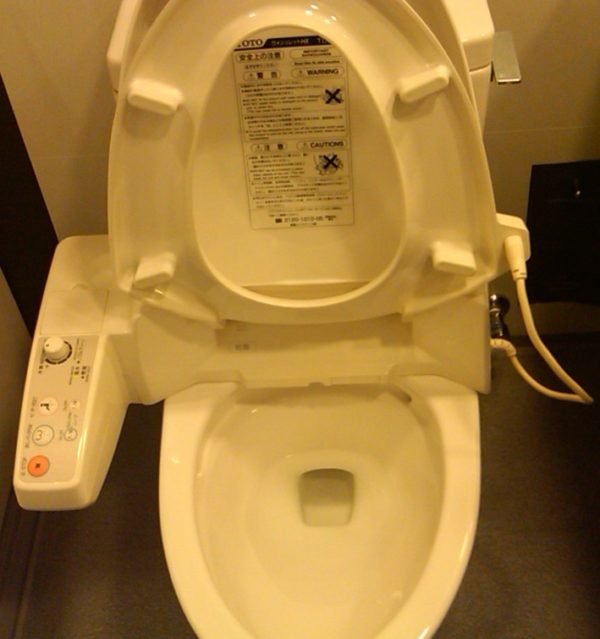 Yes, those are warnings on the back of a Japanese toilet seat.

You're a hoot Suzanne! My first encounter with one of these hifaluting toilets was in the middle of the night in the Narito airport. It didn't "go" well.

Anita @ No Particular Place To Go

I had to laugh imagining you whipping out your camera in the crowded ladies room and the looks of horror you might have received! I especially love the thoughtful touch of the flushing sound for easily embarrassed women and the diagrams, too must have been great fun to see. Entertainment in the WC! Fun post Suzanne.

This is lots of fun to read. And there was a time when these toilets were quite the novelty. It is surprising how that has changed in a few years. Now we see these toilets in many upscale U.S. hotels--and at Google's offices, as I discovered a few years back. In fact, I even have a simple Toto toilet in my own bathroom at home. To tell you the truth, I prefer the simple version because every time I encounter one with all the bells and whistles I get a little thrill but I also get a little confused about what to do.

Lyn aka The Travelling Lindfields

Haha - thank you Suzanne for a very amusing read. Fortunately my first experience with a Japanese toilet was in a hotel room and I remember that it wasn't too difficult to figure out but they probably had the 'foreigner friendly' dumbed down version. You can buy these toilets in Australia now. I see them advertised quite often. They come as some sort of replacement kit, or new seat or something, for your existing water closet. I have a friend, who spent many years living in Japan, who has one. Ironically it's about the only piece of modern technology he owns.

What a clever piece on a subject that affects us all. I've seen the Toto toilets in high-end bath showrooms in the U.S., and I believe they run about $6,000. Once you got the hang of them in Japan, they must have been fun to use.

I admit I didn't try the toilet bells and whistles in public bathrooms. I kept imagining the spraying function ending badly when I was away from a change of clothes.

Destination Novels To Transport You Far From Home

I don't know about you, but I don't get to travel to all the places I dream of seeing. I...