It’s funny how you can detach yourself from reality.

June is Myasthenia Gravis Awareness Month. The most important thing is to educate people about the disease and how it affects people who suffer from it.

I thought I was doing my fair share of work by posting on my wall different banners that talked about the disease.

For a moment I felt appalled, after I took time to read the one I was posting to my brother’s wall. 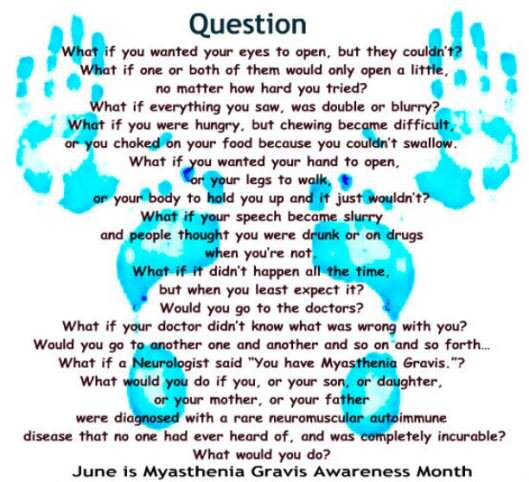 I’m not even sure my brother is fully aware of what me having Myasthenia really means.  However, this banner didn’t leave anything to the imagination.

For a moment I felt overwhelmed.

It described who I was and where I’ve been in the past six years.  When my son asked what I was doing, I told him that I was posting banners on Facebook to create awareness.  His answer pretty much summarized my feelings.

-Mom, take it easy with the posting, that’s going to make you sad.  I feel sad when I read it, and it’s not me.

He was checking his Facebook account on his phone, so he knew what I was up to.

The point is that sometimes – and just sometimes – a chronic disease can overwhelm you.  I don’t know how people who advocate so strongly for a cause don’t become the cause after a while.

Or is it that they can detach themselves at some point, to be able to cope with the situation?

I’m not sure if my one and only brother wants to deal with this now, but I felt compelled to just let him know through a banner how I felt.  I wasn’t tagging him on my banners, only my husband and kids so they could put them up on their walls. But suddenly I felt an urge to tag him with the above banner.  After a couple of minutes he “liked” it.  Are you suppose to like something like that?

What do you like, that I have MG or was your “like” to say here I am? Either way, I replied and asked him to post it on his wall if he “liked” it.

A lot of people don’t know I suffer from MG, they don’t even know what’s wrong with me.  All they know is that I’ve been sick for more time that they can remember.  Some time ago, a friend told me you look so much better than what you have.

While I was posting my banners, I placed a couple of them in my daughter’s inbox.  It’s time for her to post one too. She may not be telling the world,

You know what, I love a person with MG.

Basically because even though she accepted it a long time ago, it fills her heart with sorrow.  Just as it does with my boys.

So you see “mis queridos amigos” we have to face our realities one way or another because if we don’t we’re missing on the important part which is moving on and that is one of the things that life is all about. 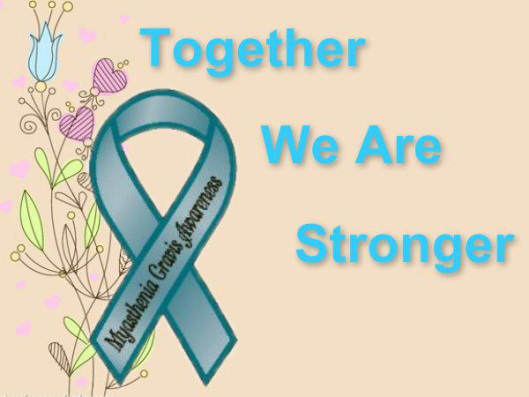 Read more from Maritza Martinez on her blog, Believing

I'm a stay at home English teacher, mother of four (one daughter and three boys) and have been happily married to my high school sweetheart for over twenty-seven years. I love to read, write and garden. I strive to always be learning new things, and to reflect on life with its ups and downs. Books have always been my best friends and helped me overcome a very difficult childhood. I owe this to a great teacher who taught me to love books and vegetables and inspired me to become a teacher. I struggle with a chronic illness (Myasthenia Gravis) everyday, but I don't let it take control of who I am. I take life at a slower pace and am enjoying every minute of it.

5 Essentials of Healing After An Affair

I got a call from a TV reporter after the infamous "blue dress" incident during Clinton's presidency. He wanted to...