My friend Tracy Beckerman from Lost in Suburbia introduced me to her friend Cathryn Michon this week. Cathryn is a writer, actor and director. That last one is especially important since only four percent of directors in Hollywood are women.

Cathryn’s says her new film, Muffin Top: A Love Story is more than a movie; it’s a movie-ment. She and her writing partner/husband W. Bruce Cameron have done something very special with Muffin Top. They created a movie that puts the chicks back in flicks. 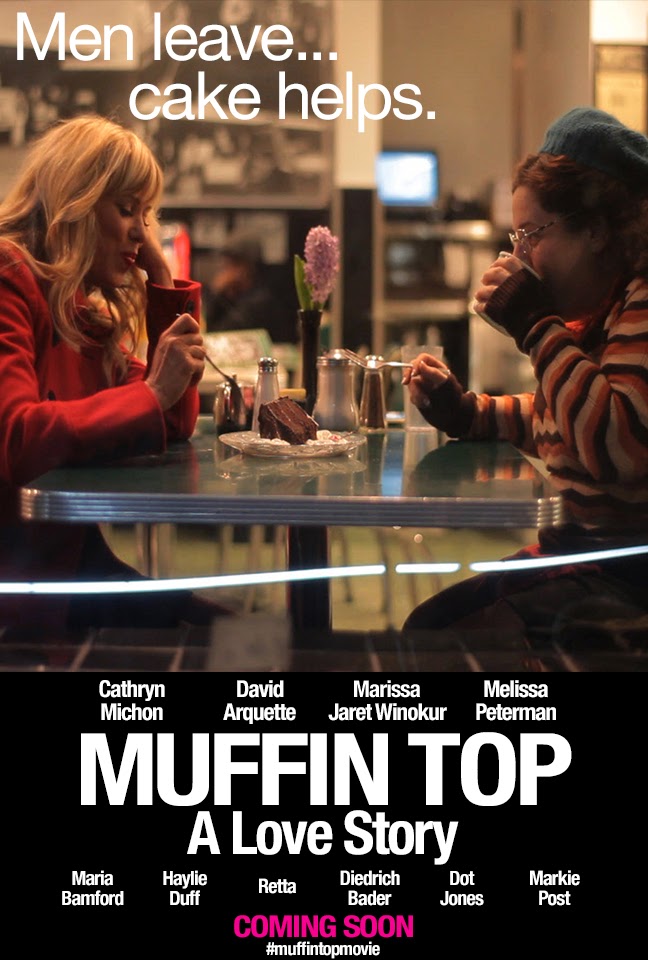 Cathryn is near the end of a Kickstarter campaign that she hopes will bring red carpet premieres of Muffin Top to towns like Little Rock, Arkansas, that don’t normally get big movie events. At this point, the campaign is more than 65% funded with a week to go. I hope you’ll check it out and consider joining me as a backer.

I think this film is important to support because of its by-women-for-women focus. Also, I notice the lack of not just women in film, but mature women. Women in Hollywood seem to disappear after 35, like my kids at chore time. There are lots of parts for background girlfriends in superhero movies, but not a lot for women who aren’t in bikinis. Muffin Top focuses on a woman in her forties and is full of women in midlife, not just a token wacky grandma.

There’s a little something special in Muffin Top for dog lovers. Cathryn and Bruce’s dog Tucker plays Boo Boo in the film! I think most films would be improved with more women and more dogs.

Cathryn and I talked a lot about body image and self esteem. She told me about when she was being fitted for a costume sized somewhere between 4 and 6 and being told the dress would hide “a multitude of sins.” Size 4 is Hollywood-Fat!

I told Cathryn I was America-Fat and moaned a bit about Spanx. She assured me the problem isn’t wearing Spanx, but not living our lives to the fullest because we feel unhappy with our bodies. I must admit to skipping a party once several years ago because I felt “too fat”. Looking back now, I wasn’t really fat at all. I loved Cathryn’s attitude toward life, and can’t wait to see how that translates to the big screen.

Check out the trailer for Muffin Top: The Movie and let me know what you think in the comments.

Anyone who comes up with a new word that is also a word play gets a viewing and attention in my book! Movie-Ment is perfect!

Thanks so much for supporting Cathryn, Bruce and this film. I really hope they get the funding they need to get this in theaters to show everyone that chicks are amazing behind and in front of the camera!!

I'm looking forward to seeing it! The cast looks amazing.

The Doctor Is In: Self-Help Books That Inspire and Challenge

Every once in a while, you come across a  book so insightful and mind blowing it has the potential to...