Treva Brandon, who blogs at The Late Blooming Bride, is getting married for the first time in just a few weeks at the age of 50. We at Midlife Boulevard want to wish Treva and Robby the best of everything!

Many years ago, my good friend Kathie Gordon gave me this needlepoint pillow for my birthday. It was in the 90’s, and I was in my late-30s. For the single girl who had everything, it was a perfect gift. 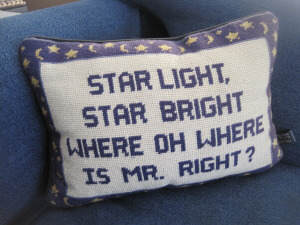 That pillow has sat on my couch through countless dates, hundreds of fix-ups, tons more blind dates, boyfriends, break-ups and bullshit, and it always asked the same question:

“Star light, star bright, where oh where is Mr. Right?”

Actually, I’ve found Mr. Right many times – in bits and pieces, that is.

One Mr. Almost Right was professionally successful, but emotionally unavailable; one was age-appropriate, but had arrested development; one was great looking, but couldn’t keep his dick in his pants; one was a Harvard grad, but was a total idiot; one was a superior athlete, but had no moves whatsoever. It was very frustrating.

I would kick and scream, stomp my feet, and yell at the top of my lungs to the universe: “Fuck you Universe! Where the hell is Mr. Right!?”

While I was busy yelling at no one in particular, something happened: I wised-up and started dating smarter. I also became hardened and jaded, which comes in handy out there in the dating world.

Here’s what I’ve learned: Mr. Right comes in many different packages. He’s not perfect, and he doesn’t have to be. All he has to do is THE RIGHT THING.

The following is my MR. RIGHT CHECKLIST, five simple observations that will ascertain early on whether your new dude has what it takes to be your Mr. Right.

So when you’re out there dating, keep your eyes open. Observe, maintain your standards, and always honor your highest good. Watch for red flags. Being a little cynical and skeptical isn’t necessarily a bad thing – in fact, it can weed out the riff-raff real fast.

Demand a certain level of decorum, transparency, etiquette, and protocol at all times. It may sound old-fashioned, but trust me, you’ll respect yourself much more in the morning.

Above all, don’t be in too much of a hurry. Love has a way of finding you when the time is right, and so will Mr. Right.

Read more from Treva Brandon on her blog, The Late Blooming Bride

Treva Brandon is a Los Angeles based writer and fitness professional. She is currently Managing Editor at <a href="http://rtime.com">RTime.com</a>, a leading online resource dedicated to eldercare. When Treva isn’t acquiring and creating original content, curating bloggers, editing copy, or writing online dating profiles for her girlfriends, she is up at 5am either teaching group fitness classes at Equinox, working with in-home private clients, or training for her next marathon. After years of living the single life, Treva has recently met the man of her dreams and is now engaged. Although not a relationship expert, she is an expert in blind dating, boyfriends, break-ups, and how to triumph despite it all. She has gladly retired her moniker of “perpetual third wheel” and will soon be joining the ranks of the married class as the world’s oldest first-time bride.

Congratulations Rhonda for finding love again later in life! As I said in my post, no one is perfect; we're all flawed in some way. But the cool thing is - at least for me - is the older I get, the more able I am to accept my own flaws and make peace with the flaws in others. Instead of getting more fixed and stubborn in my old age, I've become a ton more relaxed, which helps everything!

Love this. I am getting married, at age 47, fin two weeks. This is my second go around and his third and that is a scary proposition. Reading your geniune and lightheartedly serious post brought me back down to earth a bit. He isn't perfect but he is my mr. right. Thanks for reminding my nervous self. And, I love your comment about knowing a lot about you after the few years on this planet. Knowing oneself is the most important part of a successful relationship I believe now. All the best!

Many congratulations to you!! You're completely right that communication in a relationship is very important and so, congrats to you for finding someone who truly values you as a person!!

4.5 out of 5.0 is more than not bad, it's pretty fantastic! Keep up the good work, Lisha, and if dragging doesn't do the trick, you can always try pummeling, brow beating, or water boarding :-)

10 Rules for a Perfect Prom Night

Mary Dell writes: As the mom of a teenage daughter, I occasionally feel like I am parenting on a separate planet from...