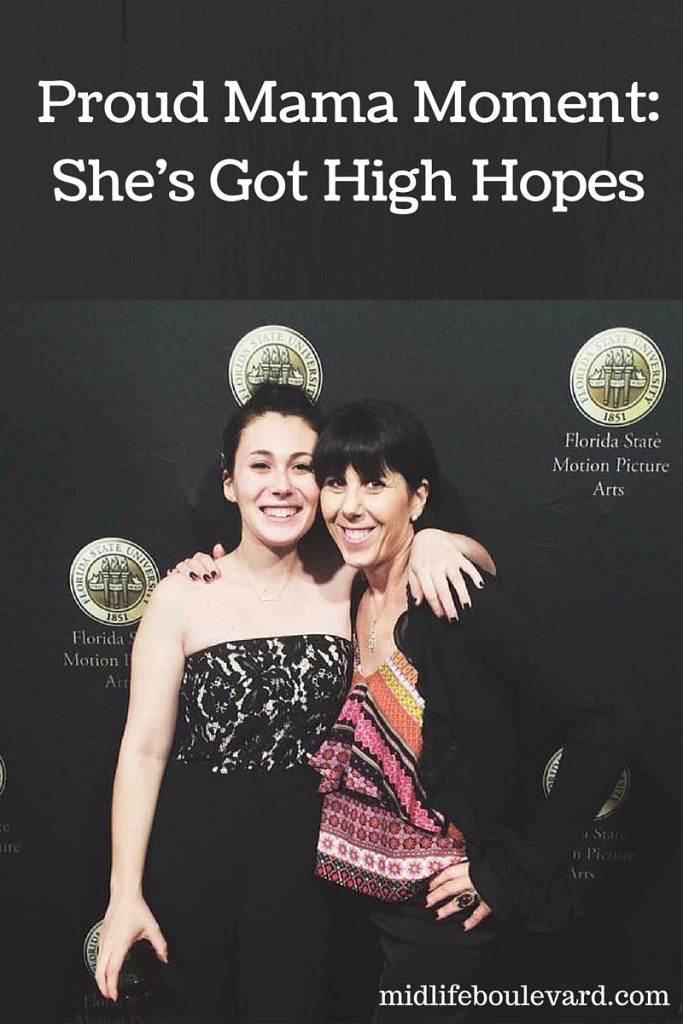 Ah, the mighty ant! Filled with such high hopes as a single one or entire colony moves and shakes through their tiny world. Nature is filled with the marvels of how they can lift 10-50 times their body weight.

Last December, I watched my daughter do her own “moving and shaking” across the stage at Florida State University’s Student Life Cinema to accept her diploma from the College of Motion Picture Arts followed by the screening of the senior thesis films with, of course, incredibly high hopes for her future. But not before she was singled out by one of the administrators assigned to give the official graduation speech to the students that she had actually been kicked out of the program at the end of her freshman year.

The purpose was not to embarrass her although I think she could have done without the trip down memory lane. Instead, it was stressed how she rallied the troops before they were even officially a troop and learned the very fine art of collaboration just like the ants creating a “lifeboat” in this video…

My daughter is very bright, witty and extremely creative. But as a creative type it should come as no surprise that she hated traditional education. “Sucking it up” as a freshman for one year of courses that had absolutely no relevance to her major was totally lost on her.

And I would have to agree. I never understood the point of taking Biology or Calculus for my degree in Communications. I wanted to read great books, write essays and put together awesome group projects. Throw in a few marketing classes and I would have been quite content thank you very much.

But I understood a means to an end.

So as I closed the car door and rolled down the window before leaving her at her freshman dorm, my best advice was:

“For the love of G-d, please show up to class.”

Well, she did, but apparently not the first day in August when her Archaeology professor announced that attendance was 50% of her grade. Imagine her surprise in December when despite doing adequately on her final exam, she still got a less than adequate final grade. And I have no idea what she was thinking signing up for Astronomy second semester. Her grade point average by April was still well above the minimum required by FSU, but the Film School itself advised her she was not going to be able to enter the program sophomore year because she didn’t meet their requirement.

My phone rang at 9:30 on a Friday morning right after the semester grades were released and when I looked down and saw it was her, I figured she either needed money, had a car accident or was really sick and needed motherly advice which undoubtedly she wouldn’t take once given. Suffice it to say, it was not an hour she was normally up and at ’em.

Over the next three days, there were endless conversations about whether the situation could be fixed. Fortunately she had already spent a lot of time through her freshman year helping out at the film school (which is why she didn’t show up to Archaeology, it seems) and became somewhat of a fixture with both students and teachers. They knew her potential for excelling in the program but, more importantly, felt she had been unfairly dismissed.

By Monday morning she had the sympathy and support of pretty much everyone. And she had also made the administration very much aware of a loophole with respect to the minimum GPA requirement for her major. In other words, she wasn’t technically a film school student freshman year and therefore the minimum didn’t apply.

The colonists had united and conquered! Case closed! Moving on… Hallelujah! And so, back to my regularly scheduled programming.

But that doesn’t mean the actual powers that be weren’t paying close attention to what turned out to be a very unusual class, scurrying around the film school for the next few years like what the administrator did, in fact, describe as a colony of red ants.

“Parents,” she said, “I don’t need to tell you what your children are like. They have been the most disruptive class we’ve ever seen. But that has, in turn, made them great collaborators and we, the administration, had no choice but to adapt to the disruption.”

She ended by saying she didn’t want to use the word mature to describe them because anybody over 40 would never admit that a bunch of 22-year-olds are mature, right? But that may just have been what they were by graduation night, ready to go out into the real world and do the same thing they had been doing to the film school staff with their future employers. In other words, they had mastered the ability to band together to effect change and ultimately make amazing things happen.

I have to say as a parent listening to what was said about my daughter and, despite the stress I felt at times going through her years of education, I know now the apple didn’t fall too far from the tree. She definitely witnessed many of my power-to-the-people campaigns. It’s just who I am. And while she often rolled her eyes at me, clearly something sunk in, right? And you know what? I am so damn proud!

Oh! And she has a job! A paying job. A paying job in her industry – that she loves. What more could I possibly ask for?

Would doing the dishes when she comes home to visit be setting my hopes too high?

Beth has written over at Beth Blacker … Call Me Crazy. Though she hasn’t posted in a while she is returning to blogging and has submitted this original content to us here at Midlife Boulevard as she finds her way. Please offer her your support and encouragement with comments below!

Hello, my name is Beth Blacker and, yes, you can call me crazy. Why? Well, most days start off with me wearing my Director of Strategic Relationships and Community Outreach hat for OJ Mortgage in Clearwater, FL . That does require networking my little midlife tushy off. Things tend to get a little crazier and crazier as each day progresses and before I know it, I find myself with some story to tell and, of course, share via Beth Blacker...Call Me Crazy and a bunch of social media sites. Bottom line, I am just keeping it real one crazy day at a time, usually with the help of a glass of wine. Hey, don't judge...this whole midlife thing requires a lot of assistance!

Creative Expression: On Writing and Why You Should

Are you a writer? Do you want to be? What form does writing take for you? Do you journal, write...