A few months ago, right as the Apple Watch pre-orders had hit 2.3 million units, I was asked to write a tech column about the watch. My reaction, much to the surprise of the editor, was, “Nah, I don’t really want or need this.” 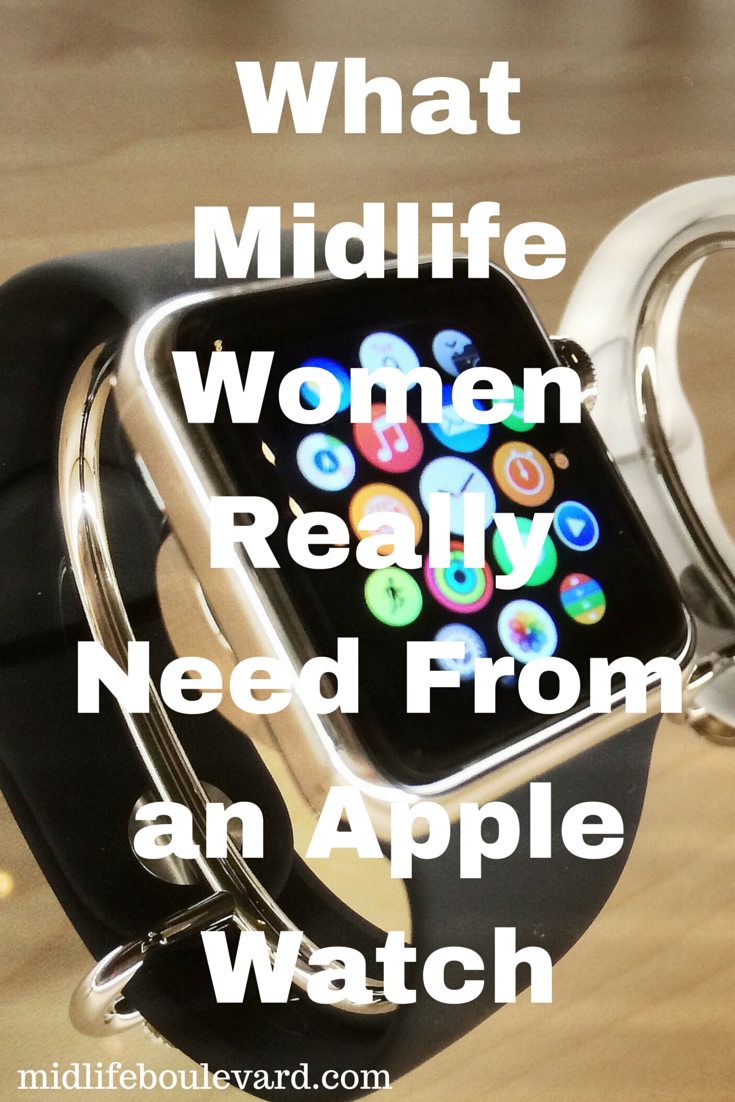 Because I love gadgets and gizmos, the editor had expected me to be leading a charge of Midlife women eager to sport the latest fashion on their wrists. However, everything I had read about the watch up until then made me want to pass on it, for now at least. My reasons were such:

1. I have several beautiful watches that I love to wear. In fact I mostly wear my favorite, which is pink gold, even when I’m gardening. It’s my “statement” piece of jewelry, and I don’t want to replace it with a piece of plastic (being that I can’t afford the $17K Apple pink gold watch).

2. I have a fitness tracker already. For my everyday “steps” I carry my iPhone (and use the free “MOVES” app). For running, I have a Polar Heart Rate Monitor, which, because of the strap that goes around my chest, gives me a much more accurate reading than even a Fitbit. I don’t have a device to evaluate my sleep. I could download an app on my iPhone like Sleep Cycle. But do I really want any electronic do-hickey next to my brain while I’m snoozing?

3. You can’t make a call on a Apple Watch. Basically, my reaction to the Apple Watch was that I would be electronically “upsizing.” When smartphones became civilian-friendly (Remember when only important business people had Blackberries?), those of us who had been carrying around a PDA, like the Palm Pilot, plus a mobile phone were able to lighten our load. The Apple Watch can’t work (for most stuff) unless your iPhone is less than 330 feet away (the maximum distance for a bluetooth connection).

4. It would be one more device to charge. I have to charge my iPhone at least once a day. (On days when I know I’ll be using it a lot, I also carry a mophie power station charger.) My iPad can usually make it through a few days. If I’m using the bluetooth keyboard for my iPad, that needs charging, as does my laptop whose battery lasts about 4 hours tops. Too many wires in my life already.

Then the other day while perusing Facebook [insert smiley face] I saw a photo of one of my husband’s colleagues wearing one of the less expensive models ($349 at the very least, which ain’t bupkis). This woman is a dean at a college, has passed the hump of 60, and doesn’t give a hoot about fads or even fashionable. She is, though, really, really into tech and a huge fan of Apple products.

I asked her how much she liked her watch. She loves it. I asked her if it had changed the way she uses digital. She couldn’t really answer that one.

Yes, Donna is the person that tech site should have gotten to write about the Apple Watch. She feels like it’s improving her life, even though she can’t give specifics.

Still, seeing one one her wrist made me think.

Here we are at midlife. We are the people who laughed hysterically at “I’ve fallen and I can’t get up,” and yet ask us what our fears are as we grow older and among them are falling and not being able to get up. But, ugh, those alert necklaces are so . . . demeaning.

So listen to me, Apple Watch app developers: Here’s what midlife women really want on an Apple Watch. Remember, we’re a huge demographic, and we have money to spend wisely.

Meanwhile, if you have any ideas for more Apple Watch apps, leave them in the comments. I might be able to hook you up. 🙂

Slowly Saying Goodbye to My Mom

Jennifer Connolly shares a deeply personal story about the long process of losing her mother. Read more from Jennifer on...