My son played high school and college football. I was apprehensive when he began his football career his freshman year of high school, mostly because of the threat of injury, but also because I didn’t want him to become a douche bag. We’ve all seen the movies and TV shows about the bullying and hazing that goes on among football players, the hard hits and humiliation they suffer when the coaches are after them for poor performance, the sad cases where their glory days are behind them after they graduate and they never quite rise up to the level of greatness in their lives that they felt on the field. 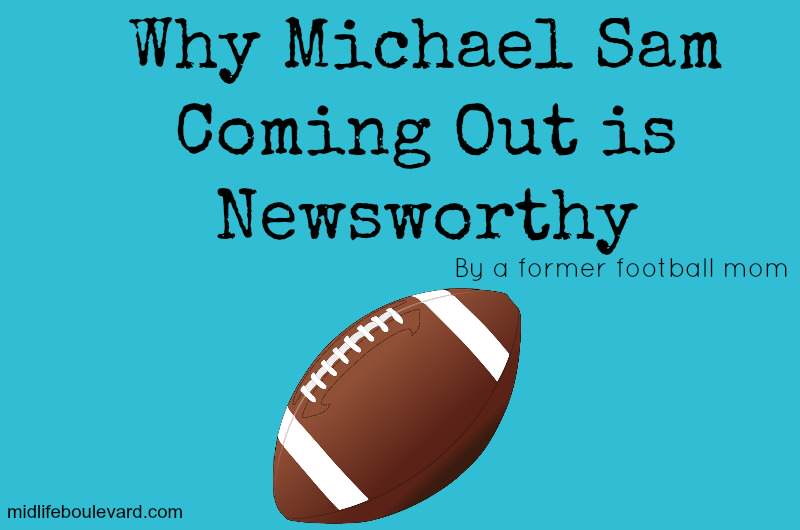 One thing you never, ever heard about among  high school football players was that they were gay. The openly gay young men at my son’s high school could be found in the theater and drama department, or sometimes on the swim or track and field teams – but football? Not a chance. It’s hard for me to imagine the tough old guy who was my son’s high school coach (a great coach, by the way) being comfortable with an openly gay player – though I could be wrong. The point is, it never happened because no player ever was openly gay on his team.

Michael Sam, the University of Missouri defensive lineman, came out on Sunday. A projected first-round draft pick, his declaration of his homosexuality has been said by some on social media to be not newsworthy – but I vehemently disagree.

Michael Sam’s coming out – before the NFL draft in May – is newsworthy and important because it’s never been done before. Yes, there are players who have come out after retiring from the game, but never before has there been a player who has been openly gay while playing the sport.  Chris Kluwe (who graduated from my son’s high school) declared his allegiance to the LGBT community and accused his coaches of being cowards and bigots for firing him for what he believed were their problems with his commitment to the cause of equality for the gay community (though many have said it was because he had a poor season). Football is the ultimate in hyper-masculine behavior, from the hard-hitting action on the field to the beer-swigging fans in the stands. When Michael Sam is drafted it will mark the beginning of a new era in football in which sexual orientation will become a non-issue – but before today, it was an issue simply because there were no openly gay players – and now there is one.

I’m happy to tell you that the first person who told me about this news was, in fact, my son, who is as positive about this as I am. He did not become a douche bag – in fact, as far as I know, most of the guys on his team didn’t either. Football taught him the meaning of commitment, teamwork, perseverance, loyalty and generosity. In his senior year of high school he played on the offensive line for weeks with the pain of a stress fracture of his femur, not knowing it was anything more than a pulled muscle, because he loved the sport and felt he needed to be there for his teammates. Though he didn’t get any field time when he played for a semester in junior college due to a concussion, he was there every day for practice and suited up for every game to cheer on his team.

Michael Sam’s teammates have shown unwavering support of his decision to come out, and the team kept his confidence until he was ready to go public. This is what the best of football is about – gay or straight – the bond between players that makes a team work.

I look forward to the day when something like this isn’t newsworthy – but for today, it is.

I agree. This feels like such a positive step for the LGTB community! Thanks for bringing this conversation to our attention.

Thanks for reading, Walker.

It is a big deal for kids growing up, for their parents and their families. Hopefully in another decade it will matter less.

Yes, hopefully it will be a non-issue someday.

Hear, Hear! Very newsworthy indeed! I so agree with you final declaration, "I look forward to the day when something like this isn’t newsworthy."

I'm awaiting the results now of a contentious Indiana Equality Amendment being debated in a Senate committee today! I won't bore anyone with the details, but am hoping this is defeated!

I hope it's defeated too!

Two things: could it be that that considering the disclosure not "newsworthy" or up to the level of an "alert" is a sign of acceptance? Not long ago, such an admission would not have been met with anything positive. And,I so very, very much admire that you were concerned about your son becoming a douche bag. Laughed right out loud at that one. Not at all surprised that he turned out as he did with your guidance.

I never thought of it that way, Susan, and I hope you're right - the less newsworthy things like this become the better!

I have to say my son is a good guy - and I do owe some of his goodness to the great coaches he had in high school playing football.

Most teams share a bond that can't be broken. When my husband coached college tennis he had a player on one of his teams that was gay. None of the guys cared. They only cared how he played not that he was gay.

That seems to be a running theme in the comments I've read on various stories - all that matters is how he plays. Except for those who are homophobic, unfortunately.