Somehow the Princeton Mom was not on my radar.

Until I recently saw an outraged Facebook post about her. Googled her. Real name is Susan Patton.

She touts the return of 1950’s thinking about women. College being about catching a man to marry.

If you want a real belly laugh and more info about her, watch these spoofs. Especially the 2nd one. Jon Stewart and Kristen Schaal.

I wasn’t all that affected by what she said. At least it didn’t make me angry. She could have her opinion. After all, I remember the book by Marabel Morgan about how women should wrap themselves in Saran Wrap before their husbands come home from work. That was popular for a while.

Never caught on at my house.

Until I heard her say something about date rape in an interview. In that situation – if a girl had too much to drink, and then said she had not given her consent to have sex.  She had put herself in a vulnerable position. If a boy took advantage of her?…. She’s to blame.

I have certainly heard this before. We probably all have. 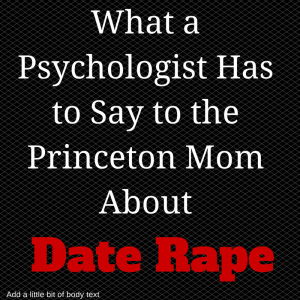 Here is the first problem.

I have never worked with a victim of ANY rape that doesn’t express guilt. I don’t care whether it’s the most random event – a no substances-involved, complete stranger, knife-to-her-neck, broke in her apartment with two dead-bolt locks rape – she will find a way to blame herself.

It’s a way to achieve the return of a sense of control. If a rape victim can find something that she might have done to prevent the rape from happening, then she will.  Her mind looks for those things feverishly. In reality, there is nothing.

It’s a strange sort of reasoning. Emotions have to be sorted out. With careful counseling.

A rape victim has to rebuild a sense of trust. A belief that she has some control of what’s going to happen to her in the next moment. Having lived through moments when she did not.

Ms. Patton. You telling any victim it’s all her fault is icing on a painful cake. She already feels like it’s her fault.

That’s one issue. Here’s another.

It’s not rocket science for any of us to say that drinking too much makes you vulnerable. It’s a stupid choice.

There is a difference between taking responsibility. And blame.

You can take responsibility for something that you had control over creating. She is certainly responsible for having too much to drink.

Was he drunk as well?

Then we’ve got 2 stupid people. That’s not an excuse for him either. She is smaller. Not able to defend herself if things get intense. I have talked to so many girls who have been in this situation. They were scared. Or they just didn’t know what to do. They look at me. They themselves are unclear about whether or not to call it rape.

Some say they didn’t say “no” but the guy should have “known”. Or frankly, that they don’t even remember much of what happened. Maybe she didn’t plan to have sex at the beginning of the night. Maybe she wondered or had considered it.

It’s painful for them that it happened. Something to work through.

Others said “no”.  They are absolutely sure they were raped.

I have a 20 year old college son. I know there has been lots of controversy on his campus about this issue. If I were a guy, I wouldn’t want to get labeled as a rapist for misreading someone’s perhaps confusing signals in the heat of the moment. Obviously, if a girl, I wouldn’t want the experience of someone forcing themselves on me.

What is obvious is that it is very complicated. Some cases are black and white. Some gray.

My 2nd message to Ms. Patton?

Quit saying hurtful things to girls about being date-raped. Unless you were there, you don’t know what happened.

Until you have sat with one of these girls. Heard how she sleeps with all the lights on. Avoids her friends. Can’t walk on campus at night. Has nightmares. Doesn’t go out on dates anymore. Until you have seen and dealt with some of the aftermath…

I really don’t think you should talk.

Thank you so much for this, what Princeton Mom said was so victim-blaming while at the same time declaring that she wasn't blaming victims. When I saw the video, it was almost like a full house of rape-apologist bingo. At the Norman Awards (http://normanawards.com/) we give women a space to talk about the time they were drunk and incapable and made bad choices, but they didn't get raped because they were with men who weren't rapists - those men simply chatted to them, or got drunk with them or helped them get home safely. They didn't rape them, because women getting drunk doesn't cause men to rape, the only thing that causes rape is a man's choice and when women like Princeton Mom tell rape victims not to drink, they are putting the blame for rape on women, not men. And not only are they engaging in the sort of cruelty you've so deftly pointed out, they are also insulting all the men out there who don't rape women who are drunk by implying that women should assume all men are rapists and therefore never drink too much in case one of them pounces. What a terrible view of men, as well as of women.

You are welcome Veronica. I did hear from Susan Patton interestingly enough. A tweet saying she did NOT (her capitalization) want girls to be victims so obviously "we did not agree" (Her quote as well). Quite a twist on words I might say. I asked her if she had even read the post. She did not respond. She is not saying anything, as you point out, that is new. It's just aggravating to hear another version of it. I hope not one girl, woman, boy or man who has been raped in any way is listening. Thank you.

Thank you so much for weighing in on this Dr. Rutherford. The more folks understand the emotions and pain associated with this issue, the less likely they are to shame women. I don't know much about this Princeton Mom lady, but I have heard these words uttered before. It's horrible and sad. -Veronica

Thank you Jo. I so appreciate you commenting!

Amen, to all of the above!! Very well said!