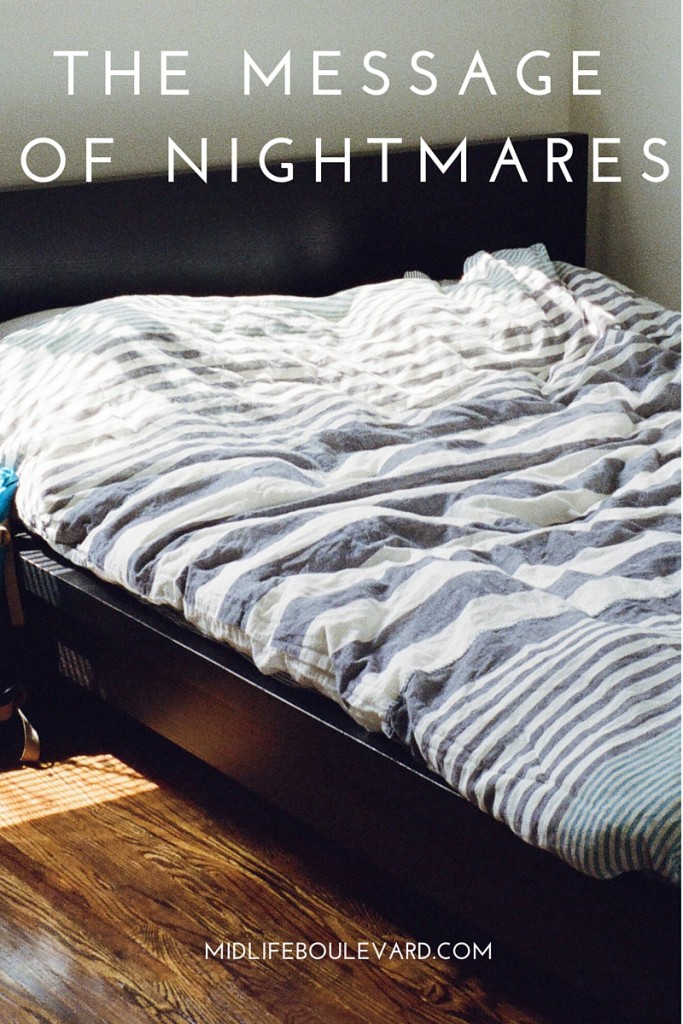 Last Saturday afternoon, I had to recoup.

I had slept terribly the previous two nights due to what I describe as vulnerability dreams. One where I was walking around some huge mansion, with only a towel on, and I couldn’t find my room. There were menacing-looking people all around.

The second one was worse and kind of gruesome, so I’ll spare you the details.  I was screaming in my sleep, “Help, help!” and no one came. My husband, sleeping soundly next to me, didn’t even wake up to comfort me. He said he heard me, but thought I was singing.

I don’t have nightmares often, so two in a row got my attention.

Nightmares, in fact a lot of dreams, are the unconscious mind’s way of calling something to our attention. Some of them are about real trauma that has happened, more like a flashback in your sleep. Those who suffer from PTSD often have recurrent nightmares of their trauma. Those reenactments are your mind (and perhaps your spirit) trying to work through what happened. The more you heal consciously, the more the nightmares will tend to decrease and/or become less frightening.

Other dreams are what’s termed day residue, meaning that you’re recalling something that caught your attention during the day. Like if you ate pizza, you’ll dream about pizza.

I’m talking about dreams or nightmares that hold within them (metaphorically) some struggle you’re having.

I’m sure y’all have had them. The one where you can’t find your class, and you’re late — and you haven’t been in school for years. Or the one where someone is chasing you, and you’re running like your life depends on it — but you haven’t a clue who it could be, or what’s wrong.

So the information that my body, mind and soul was telling me was that I was dealing with feeling exposed, vulnerable, confused, and afraid. I needed to deal with that. Openly.

But I was avoiding that need. Saturday afternoon, I had been trying to write, blatantly ignoring the last two nights. It wasn’t going well, so I flipped on the TV. And there they were — my path to feeling better. Three, back to back, tear-jerker, feel-good Disney movies in a row.  Sister Act, Sister Act II, and the worst (best) of all, The Blind Side.

I sat and watched, I laughed at the parts that I knew were coming, but somehow still comforted me in their simplicity. I quietly let tears run down my cheeks, knowing full well that my tears had nothing to do with what was playing.

I had a fall apart.

Some might say I wasted the afternoon. I got nothing accomplished that was on my list of to-do’s. I didn’t help anyone, or make any headway on multiple tasks that needed attention.

Some might suggest that it was all about distraction — that I was not dealing with what I was really going through.

They would be wrong. It wasn’t a waste at all. I hit the pause button, and listened to my heart.

I gave myself time, and began to figure out my fear, as I released whatever emotion came to me. I let my mind make connections that it needed to make.

Art, music, books, poetry,movies. So many things can help you connect with your deeper self, if you allow it.

I have talked with others about what I figured out that afternoon. It felt good to accept and admit my vulnerability. I got support, which felt warm and lovely.

I haven’t had any more nightmares, at least for now.

And If I do, there’s always Mary Poppins.

If you are experiencing frequent nightmares or PTSD of any kind, please reach out for help. You can find resources on the National Center for PTSD website.

I just cried and laughed through The Blind Side again too. I struggled with insomnia all last week and found the same solution worked for that too. I needed a break. I hope your nightmares stay long gone!

I hope they do too Doreen. That's so funny you found solace in the same movie! Thanks for commenting!

Who Decides Whether Someone is Worthy of Kindness?

Pennie blogs regularly at The Accidental Blogger. This post first appeared there.  When does a person become unworthy of kindness?...