Menopause came for me several years ago, when I was in my mid-fifties, and I can’t say that I’ve enjoyed the experience.

Women who proudly refer to their hot flashes as “power surges” are, I think, kidding themselves. But they’re not fooling me! There’s nothing fabulous about your body temperature suddenly rocketing upwards, leaving you dazed and sweating as you attempt to go about your business was if (Gasp!) nothing (Yikes!) is going on. 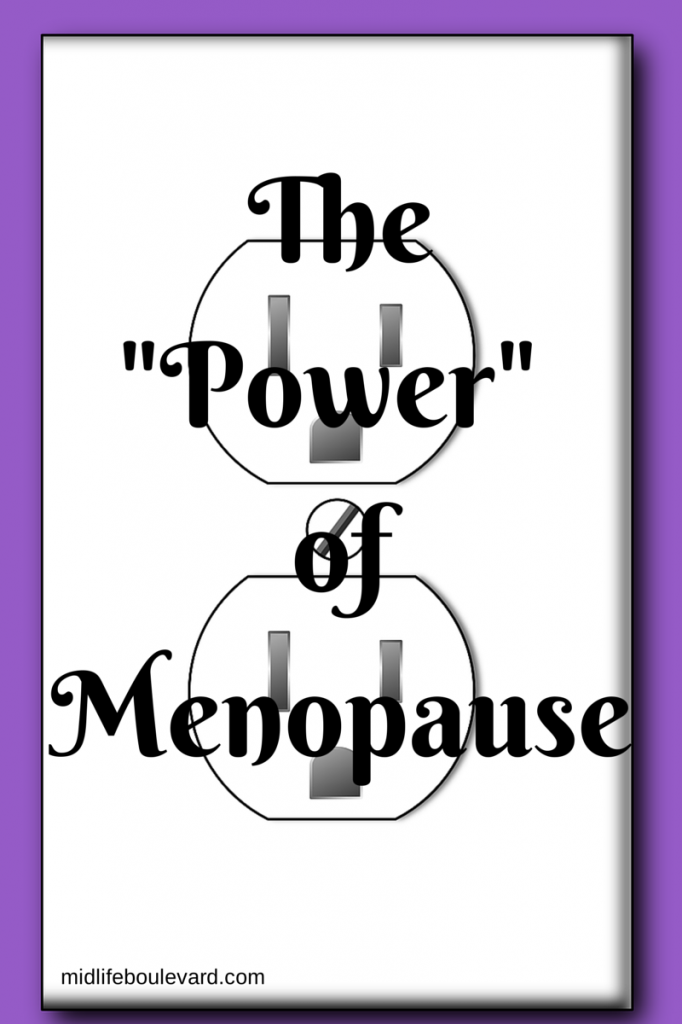 I work in a public library, which means that it’s not unusual for me to begin checking out your books as cool as a cucumber, and finish the transaction drenched, dizzy and red as a beet.

Power surges? Please. Is it hot in here or is that bullsh–?

You’d think that if I could just gobble a little pill that would turn down the heat, I’d do it in a flash.

But I’m a D.E.S. daughter. My mother was given a synthetic hormone when she was pregnant with me, in the hope that it would prevent miscarriage. Although she was told that it was perfectly safe, the drug, in fact, increased her risk of getting breast cancer, which she died of, just 24 years later, at age 57.

Drugs? No thanks. Perfectly safe? Forgive me for being skeptical.

So my menopause has gone un-medicated. My symptoms? Sometimes I’m dizzy. Sometimes I’m blue. I can have trouble sleeping. Occasionally, I’m walloped by something that feels like a coronary, but is actually hormones merrily charging through my system, causing trouble.

But mostly? Lots and lots of hot flashes.

How do I cope? I kvetch! A lot. Thankfully, I have friends and family who care enough about me to listen with sympathy when I rant and moan, and a man in my life who tells me that I’m beautiful when I pant, gasp and start pulling off layers.

I walk everywhere, and swim often. Does this actually help? Who knows? But it sure feels great when I’m doing it. And it’s impossible to feel a hot flash in a swimming pool.

I also joke around.

“Roz? Is something wrong? You’ve just turned scarlet and you’re standing in a pool of sweat!”

Best of all? I focus on the silver lining — I got to throw away both my tampons AND my birth control. Yippee!

If menopause made my life unbearable, would I lunge for the meds? I don’t know. So far, I’m okay with hanging in there, secure in the knowledge that one of these days — or years — the adventure that is the Change O’ Life will finally come to an end.

In the meantime, if I redden and gasp when you check out your next book, it’s not because I’m shocked that a person of your refinement would want to read “Fifty Shades Of Grey,” or that the library fines on your card are excessive, or that you’re wearing the ugliest scarf I’ve ever seen on a human being. It’s just menopause.

At least that’s my story, and I’m sticking to it.

Love your humorous take on a topic that is so challenging for some women.

Love this! It's great to hear you are fighting menopause head on. I've been debating on getting assistance for my peri symptoms but I'm willing to try to head 'em face on. My only issue is when they are so bad, like migraines, and they keep me from going into work. I'm going to do my best though. Glad to hear there's hope!

Yeah..the hot flashes SUCK. And who called them 'tropical moments'? They're not tropical moments..tropical moments involve a fruity drink with an umbrella in it..not the feeling that you'd be willing to rip your clothes off in front of strangers.

I almost tremble to type this, but I haven't had any hot flashes since August. Shh. I'm in hiding.

I can totally relate, I'm on Tamoxifen so the hot flashes do not seem to have any end in sight and man they are annoying! The whole sweaty face thing is just crazy. Very funny post, you're not alone, my dear and you sure have the right attitude :)