Menopausal munchies?!?! Why did no one ever bother to tell Marcia Kester Doyle that this would be a thing?! Read more hilarious insights from Marcia on her blog, Menopausal Mother.

I started my first diet in middle school after a fellow student accused me of looking pregnant because my blouse was so “puffy” around my stomach. I didn’t know how to explain to him that my stomach size was the result of a food baby, not a real baby. 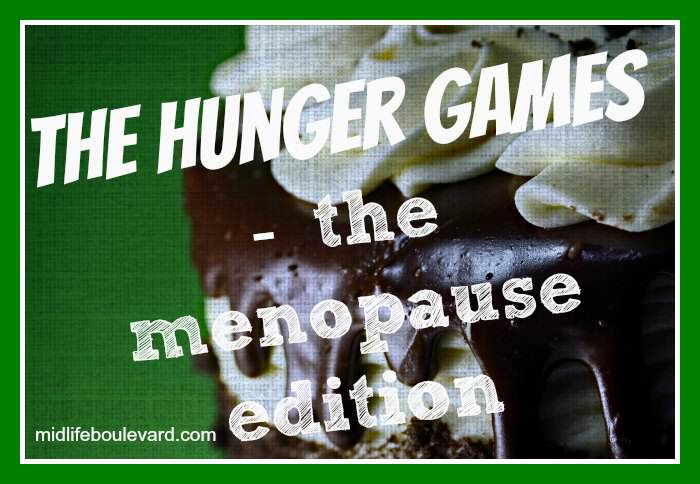 All those years of sneaking chocolate bars at the park with my sister were beginning to show around my middle, and I had to do something about it…like adopt the diet of a rabbit – all parsley and lettuce and no fun.

My body shrank and expanded like an accordion over the years as I bounced from one diet to another. In my early twenties, it was all about leg warmers and sweatbands at the gym to keep the pounds off.

Then came my pregnancies, which were happy times for me because being pregnant gave me license to do some serious bulk eating. Little did I know, all those pepperoni pizza slices were going to take up residence on my hips for the next twenty years.

I had a brief reprieve when Fen-Phen became popular. What an amazing pair of diet pills! You could lose ten pounds in your sleep, paint your entire house in one day, and fit into a size 3 dress by the end of the week. Sadly, this drug combo was banned (all the good stuff is) and it was back to old-fashioned dieting: carrot sticks and lettuce and me feeling more like a rabbit each day.

For years I ate right, exercised, and kept the weight off … and then something strange happened when menopause hit.

It was as if aliens stole my body and replaced it with a much plumper, sweatier version. I gain five pounds now just looking at a piece of devil’s food cake. What cruel joke is this? I finally don’t have to count the days on my calendar to calculate when my period is due, but now I’m left to obsess over the numbers on the scale. If I could have a conversation with my scale, it would go something like this:

ME:  “Good morning, scale. I’d like to weigh in today because I’ve been really good on my diet this week.”

SCALE:  “Aren’t you forgetting about those chicken nuggets you stole off your son’s lunch plate when he wasn’t looking?”

ME:  “Yeah, but those don’t count because they were just bites.  I didn’t eat a whole one.”

SCALE:  “And the Hershey bar?”

ME:  “Hey, that was a Halloween fun-size candy bar.  That doesn’t count, either.”

SCALE:  “What about the three slices of all-you-can-eat-toppings pizza you had Saturday night?”

ME:  “I don’t remember that because I drank four glasses of wine first, so that definitely doesn’t count.”

SCALE:  “And the secret rendezvous you had with the leftover lasagna yesterday morning?  Who eats a cold wedge of lasagna at 7:00 in the morning?”

ME:  “It was part of a nutritious breakfast and…okay, you got me there.  Maybe today is not such a good day to weigh in.”

SCALE:  “Ya think?  Besides, you might damage my frame if you step on me now.”

SCALE:  “Just saying…now go back to your lettuce leaves and don’t bother me again until you’re serious about this dieting stuff.  Oh, and by the way, is it my imagination or are you growing whiskers and longer ears lately?”

My doctor told me to expect a ten-pound weight gain during menopause.  I think she was being kind.  What makes no sense to me is how much I sweat during a hot flash – I look like I’ve just run a marathon, so I ought to lose at least a pound of liquid a day in the process.  I should resemble a stick by now, not a basketball.  Pretty soon I’m going to have to call Omar The Tent Maker to design my next wardrobe if I don’t lose this excess menopausal weight.

Everyone laughs about marijuana munchies, but what about menopausal munchies?  They’re worse because they last all day and night without leaving you in a state of euphoria.  The “FEED ME” valve won’t shut off in my brain, and nothing seems to alleviate it except more food.  My stomach expects every day to be Thanksgiving with all the trimmings.  Instead I have to settle on plain turkey burgers, steamed broccoli and sugar-free Jello.  Yummy.  At this point I’m ready to gnaw on the frozen package of stale corn muffins in the back of the freezer.

If this was a kinder, gentler world, women would lose weight during menopause, their skin would glow and their hair would become thick and shiny.  Unfortunately, everything is turned upside-down in menopause– we gain weight, our skin dries out and the only thing that’s thick and shiny is our thighs stuffed into a tight pair of black slacks.

Sometimes I feel like throwing my scale out the window and slipping into a roomy house dress with large, flower print.  I could eat doughnuts all day in front of the air conditioning vent and get caught up on all the latest nighttime television dramas … I just might do it.

And the next time my scale talks back to me, I’m going to duct tape it to the wall as a decorative antique.

You'll be able to stockpile some good bargains by utilizing different coupons you will find.

My scale doesn't even talk to me anymore:) I think it got offended when I gained that half of a pound last week (it's very sensible!). But seriously, loved the article, and I want those marijuana munchies too! xx Abby

Exactly! I'm wondering if I should have my jaw wired shut to keep me from stuffing my face all the time, ha-ha!!

Are you serious?? 10 lbs at menopause?? Nooooooooo I can't. I cannot. I'm 5'3". 5 lbs extra weight and I look like Honey Boo Boo. For real! Lol. I love this post. And Marcia.....she's so talented at writing. A blessing in the blogger world!

You are so sweet---thank you! You're a tiny thing too, is sounds like. I'm 5'9---always been a big gal. I have to do zumba 4-5 times a week now to counteract my Viking appetite.

You had me laughing our loud! I am not there yet, but my best friend is trudging through. I am going to have to share this with her.

Thank you so much Sheryl, and yes, please do share it! XO

I found this post through #MidlifeBloggers on Facebook. I've battled 15-20 pounds since puberty. Could lose the weight and keep it off for a while. Then menopause came along and I started taking HRT (instant weight gain!). Diet? Does no good. Workout 60+ minutes per DAY? Nothing. In fact I've gained 5 pounds in the last five months! Maybe retirement had something to do with it. But I am exercising more than I was when working. Nice to know I am in great company.

I promise you----you are NOT alone! I'm right there with you!

13 Lessons From 20 Years of Marriage

After 20 years of marriage, Angela Keck has learned a thing or two...or thirteen. Here she shares what she would...