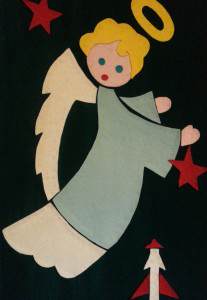 Who wouldn’t want to be one? (Someday, that is.)

Wings that take you wherever you want to go, with no security line hassles.

And you can sing!  (I didn’t make the chorus in fifth grade, which devastated me, and age has done nothing for my vocal tone and range.)

Then of course, there are angels who don’t wear the standard garb. Angels, who appear with invisible halos, to help a girl out.

What’s the kindest thing a stranger ever did for you?

I love this question!

But here’s another one.

What’s the kindest thing you’ve ever done for a stranger?

I’m realizing now, that in the menopause journey, I shrank into myself, some. I became less outgoing and less willing to extend myself to strangers.

Only recently did I, a people lover, figure out this had happened.

But you can’t be an angel, even a sometimes angel, if you hide inside yourself.

I revved up a bit on a flight home from Baltimore yesterday. When the plane landed, the woman next to me thanked me for chatting. She and her mom were flying from Dayton to visit a sister/daughter in North Carolina.

Usually, I barely speak on a plane unless spoken to, as I’m fearful I will lose my reading time.

My seatmate ended her thank you by saying that her mom hadn’t flown since 1968.

Granted I was a tiny angel, but I like to think the mom, who had a long day, found the skies friendly in 2013, in part, because of our conversation.

Did your flight into menopause make you more outgoing or did you turn inward?

If you turned inward, any plans to spread your wings again?

Christmas Banner:  My mom, Nancy Kiehne, made the angel banner in 1965 for Divinity Lutheran Church. The rocket is a nod to the space program, which was in full swing.

Women can't easily escape by experiencing menopausal. The most common thing that you are going to do is to eat healthy foods, exercise daily, and read more about drug free menopause remedies.

Before we get too close to Christmas I thought it might be SMART to remind myself (and anyone else who...