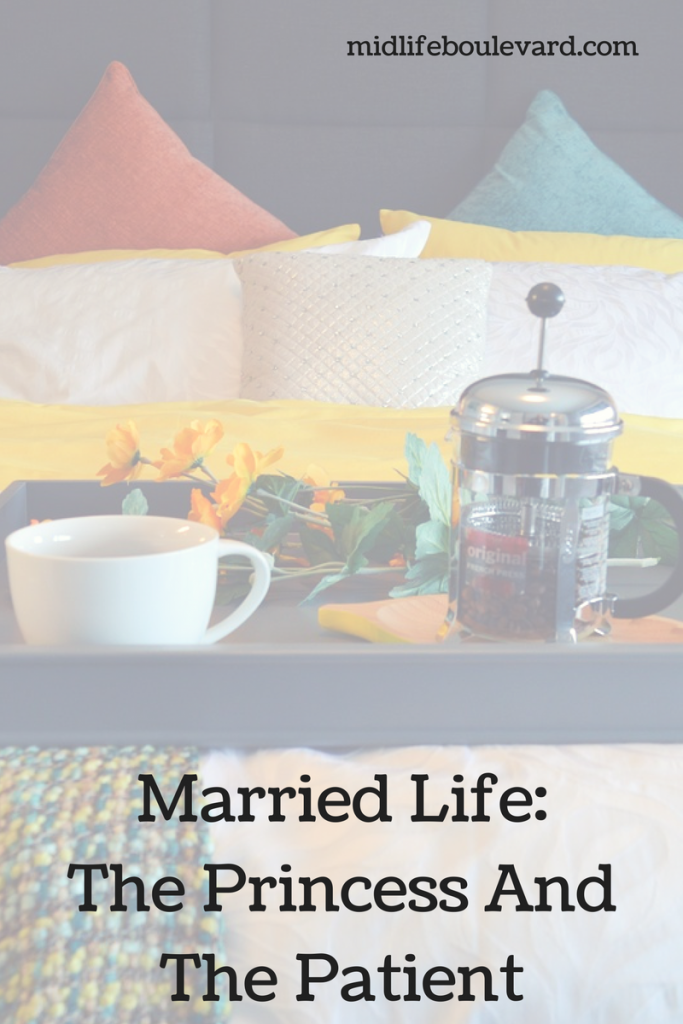 Camille DeFer Thompson can be found sharing her written word on her website of the same name. This humorous post on married life and what a not-so-wonderful nurse she was for her husband was originally featured there.

Jerry sat on the edge of the exam table, his hands fidgeting in his lap. “I like to get out back and water the plants a couple of times a week. Would that be OK?”

I leaned against the back of the chair I was sitting in next to the door, entranced by the covers of  ancient magazines in the rack on the wall. An issue of Good Housekeeping dated in the last century caught my eye.

Doc hesitated. “It’s important that you not go outdoors at all, at least for a while.” Then he glanced in my direction.

“What?” I said, shaking loose from my stupor. “Oh, yeah. Watering. Sure.” I turned to hubby. “Don’t worry, Hon. I’ll take good care of your prize petunias.”

Hmph. No more barbecued tri-tip on the deck for a couple of months. Guess the hubs will have to confine his culinary creativity to the kitchen. Jerry’s our in-house chef. For me, assembling a bowl of cold cereal is a challenge.

Hey, what if he can’t go near the stove? Crap! We’re almost out of Cheerios.

Sawbones continued his instructions. “No lifting anything over five pounds. And no exertion. Nothing that will cause your heart to race, or make you perspire.”

I straightened up in the chair, my ears on high alert. Who’s gonna move the furniture when the cleaning lady comes? And what about those gross garbage cans that have to be rolled out to the street on pickup day…every week.

I took in a deep breath. OK, I admit I’m a bit spoiled. Jerry does most of the chores in our household – cooking, yard work, trash dumping. It was time to repay my debt. Suck it up, Girl. It’s only temporary. You can do this.

“No worries, Sweetie,” I said, suppressing my disgust. “I’m here for you.” Jerry smiled and puckered his lips into a silent kiss.

About that time, Nurse Nightingale swooped in. Donning a pair of the same Barney-colored gloves as the doc, she applied a wad of goop to a gauze pad, then plopped it on hubby’s head. She secured it with strips of paper tape. What? No Sponge Bob Band-Aid?

I averted my eyes, lest I catch a glimpse of the open cavity.

“Oh, one more thing,” Dr. Cheng said, this time, to me. “The dressing must be changed at least twice each day. We’ll send you home with a supply of sterile gloves, swabs and bandages.”

Seriously? Now he had gone too far. Watering. Fine. Trash cans. OK. But wound care? Do I look like a nurse? The sight of rare steak makes me gag. No way was I going anywhere near that yawning gash.

Frantic, I scrolled in my mind through a list of caregiver-type friends and family I could enlist for the job. Money was no object.

But Bones wasn’t finished. He turned back to Jerry. “You’ll have to sleep in an upright position for a few weeks, until I see evidence of healing. Some patients find it easiest to sleep in a recliner.”

And there it was – the silver lining in the cloud of despair hovering above me. With hubby in the recliner downstairs, he could snore to his heart’s content and I wouldn’t hear a grunt from the master suite where I lay in quiet repose. Maybe that other stuff wouldn’t be so unbearable after a good night’s sleep.

“It’ll be fine, Hon,” I said. “You can snuggle under those super-plush blankets I keep in the closet for guests.” I squeezed his hand and winked. “I’ll even bring your coffee in the morning.”

How To Avoid The Post-Divorce Meltdown

Martha Bodyfelt is the founder of Surviving Your Split. She is a divorce coach who offers words of wisdom to...