Vikki Claflin has developed this handly (humorous) marriage quiz. Take it and find out if your marriage is wow, eh, or meh. Read more from Vikki on her blog, Laugh Lines

A couple of weeks ago, Hubs and I went out to dinner with some close friends who have been married 30+ years. They walked into the restaurant holding hands, and throughout the evening, they behaved like newlyweds. We noticed lots of touching and intimate smiles, and they bragged about each other’s recent accomplishments with pride. It was almost more than we could stand.

But it left us wondering if most couples were ever curious about how they compared to others. Are we “normal”? Is every other couple out there more in love than we are? Does the fact that I still love you, but you MAKE ME FREAKIN’ CRAZY mean we somehow failed?

Later that night, wide awake at 2 a.m. (new writing ideas tend to make me nocturnal), my mind was spinning with questions I’d ask a girlfriend who was pondering the current state of her marital romance. Were she and the Hubs still blazing hot and “in love,” or were the fires more of a steady burn, present but tamped down under kids, dogs, careers, meddling in-laws, and mortgage payments?

Or is their presumably once-blissful union now toasted beyond resurrecting, even by four-inch red stilettos and repeated downloads of their wedding song? Two hours later, freely admitting that I’m wildly unqualified to counsel anyone on how to maintain wedded bliss, I’d created my How to Gauge Your Romance-O-Meter Quiz: 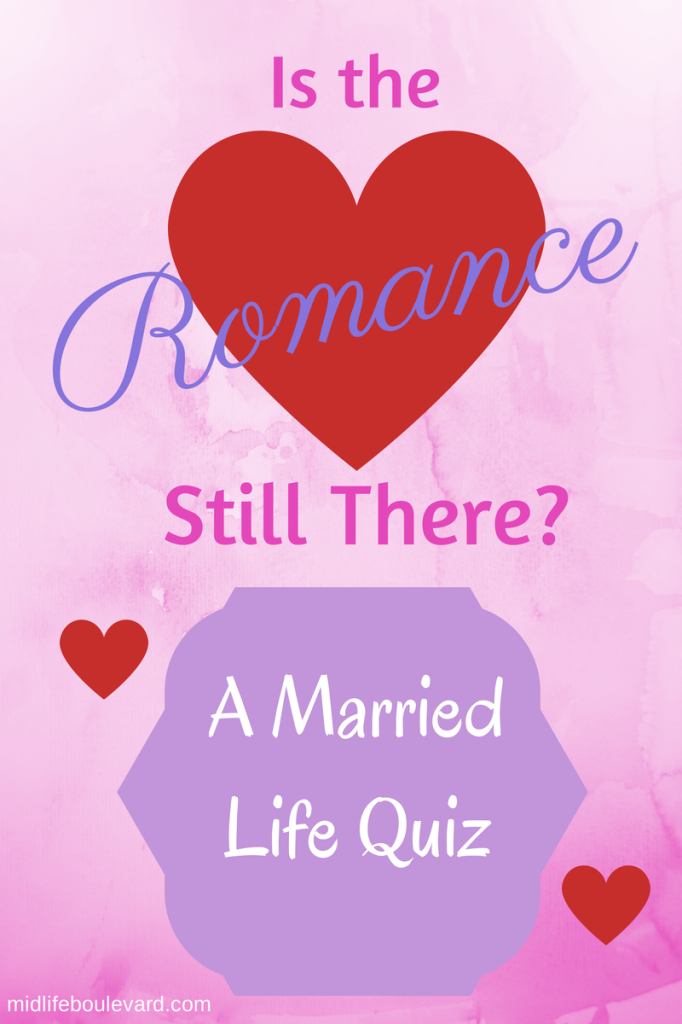 1. How much time do you spend each day really talking to each other? (not including “Did you remember to pick up milk?”)
a. 1 or more hours. We never run out of things to talk about.
b. Whenever something important comes up. We’re just really busy.
c. About what?

2. How often during the day do you touch?
a. Whenever possible. He’s just so hot.
b. When he helps me with my zipper.
c. When I kick him in the shins because he’s snoring. Again.

3. When was the last time you or your spouse said “I love you”? (not including “Love you, too” on the way out the door or before you hang up the phone)
a. Every day. As often as possible.
b. Whenever it seems called for. Valentine’s Day or our anniversary. Or during make-up sex.
c. Our wedding night. In 2007.

4. When was the last time you had a Date Night, or any romantic evening for just the two of you (even if at home)?
a. We have Date Night once a week.
b. Probably 2-3 times a year, if we’re not too tired.
c. Date Night?? Geez, we’re already married. Why spend the money?

5. When you’re angry at your man, you:
a. Schedule a relaxed, uninterrupted time to talk it through, while wearing your sexiest LBD for the inevitable apology sex.
b. Stay silent until he coaxes it out of you, shed a tear for maximum guilt infliction, then bestow forgiveness if he promises to pick up a bottle of your favorite wine and never do that again.
c. Throw his vintage album collection into the front yard and donate his golf clubs to your kid’s school fundraiser.

6. When is it okay to tease your spouse about his appearance?
a. Never. I could never do anything that might hurt his feelings.
b. Rarely. Only when he wears that ratty tie-dyed t-shirt that makes him look like a boomer hippie.
c. Anytime I need a laugh. I mean, a Fu Manchu mustache at his age? Seriously??

7. You’re in a bedroom dry spell. Your first thought is:
a. He’s been crazy busy at work. Maybe I’ll give him a candlelight massage while wearing thigh highs and just see where it goes.
b. It’s totally natural. But I don’t look like I used to. Maybe it’s time for Jenny Craig. Or Botox.
c. I’d hire a PI to track his loser ass and call all of his Facebook girlfriends to find out which tramp he’s sleeping with.

8. When you and your spouse fight, you:
a. Try to keep it under control, constructive, and confined to the problem at hand.
b. Go ahead and shout it out. Sometimes you just need to clear the air.
c. Use it as an opportunity to revisit everything he’s ever done wrong and to remind him of how forgiving you’ve been to his sorry excuse for a husband.

9. What best describes how you feel about your spouse on most days?
a. He’s my soulmate.
b. Of course I love him. He’s my husband.
c. Meh.

10. When you introduce your spouse to your friends, what do you feel?
a. Proud. I call him my Trophy Husband.
b. Sometimes slightly embarrassed. I told him not to wear that stupid t-shirt that says “Beer. It’s What’s for Breakfast.”
c. Bahahahaha! Not. Gonna. Happen. I told him he’s not going to meet my mother until he completes rehab.

11. When you need advice, do you often ask your spouse?
a. Always. He gives me better perspective.
b. Usually. Unless it a female thing, like how to deal with post-menopausal chin hair or what to do about that recent inexplicable rash in my lady parts.
c. You’re kidding, right?? He’s usually the one I need advice about.

12. How often do you keep secrets or lie to your spouse?
a. Never. We tell each other everything.
b. When I think it might be hurtful. Or when I’ve been shopping.
c. Let’s just say he’s on a need to know. And he doesn’t need to know much.

13. When he comes through the door after work, you think:
a. Yippee!! He’s home! Let’s get naked!
b. Oh good, he’s home. I need him to watch the kids while I run to the store.
c. Oh, crap. There goes the evening.

14. Which best describes your sex life?
a. Mind-blowing. We can’t keep our hands off each other.
b. Sporadic, but still great.
c. Fabulous. Oh, you mean with him?

Mostly A’s. You people give the rest of us diabetes from sweetness overload. But good for you, especially if you’ve been married for any length of time. Keep it up, but when things get too lovey, get a room, okay?

Mostly B’s. Welcome to the center of the marital bell curve. Like most married couples, you love each, but some of that early raging fire is now more of a child’s glow stick. Be careful not to become mere roommates. Every now and then, why not bust out those ridiculously uncomfortable, but undeniably sexy stilettos and your hottest dress, and take your man down memory lane.

Mostly C’s. How the hell did you two get together in the first place?? Assuming he feels the same way about you, I’m guessing you both sleep with one eye open. FYI, most states don’t need a body to convict. So do yourselves a favor and run to the nearest exit. Don’t stop to pack. Maybe it’s not too late to find someone you actually like.

So how did you score? I’ll show you mine, if you show me yours.

We've been married ... (oh well, I've got dementia so that is a good excuse for not being able to do math) ... since 1992. Our relationship has probably been rated sickening-sweet most of that time, but it is even more so now that I am dealing with the added confusion of dementia. I think he likes me :-) I was unable to follow the preface of your questions, but I was able to understand and answer your questions. Thanks :-)

That was fun Vikki. I'm with Lana - somewhere in between A and B, B and C if it's a bad day and sometimes D...other.

This was fun! I guess we're somewhere between B and A....at least this week :)

Thanks, Lana! I think most of probably scored about the same! :)

Too funny, Vikki! Happy to report the husband and I are doing ok, but are not at diabetes-causing levels of public smoochiness.

Thanks, Anne! So glad you liked it. And so happy to hear that you and your Hubs are doing great. Mine doesn't even know there's a quiz... :)

Is Menopause Making You Mental?

Does menopause cause depression? In this post by menopause expert, Ellen Dolgen, the connection between menopause and depression is examined....