Barbara is a psychotherapist and life transition coach. You can find her at barbarawassermancoaching.com. This post was originally featured there. 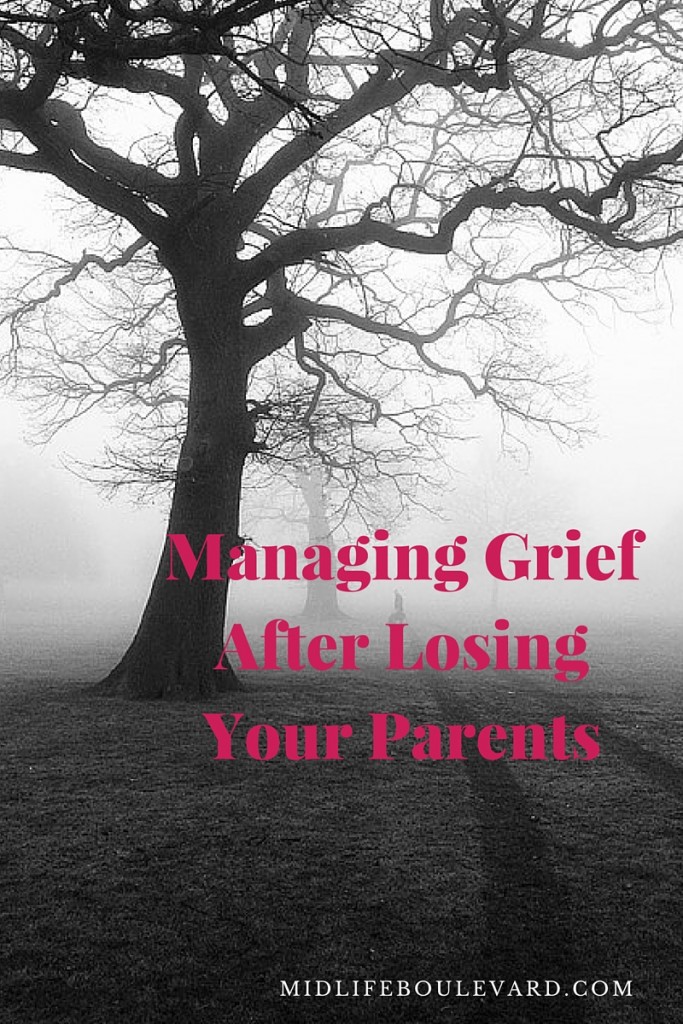 As is the case for all of us, you will likely find yourself grieving your parents at some point in your lifetime. You feel like an orphan, as you try to find your way. Hopefully that time comes later rather than sooner in life. My husband and I lost three of our parents in our late 20s and early 30s. We were pregnant, raising small children and building our careers. For better or worse, it was difficult for us to really grieve. My husband was irritable and neglected his regular joke telling ways for a while. I abandoned the second half of a bathroom remodel, the half-finished room serving as a constant reminder of what no longer mattered. We both surrendered to resentment as we watched our friends’ families bask in the joys of grandparents.

Yet lately, we have been the ones attending funerals for our friends’ parents. This is not unexpected, as losing one’s parents is something that is supposed to happen when you are in your 50s and 60s. You expect to go to funerals for parents in their late 80s or 90s. Even so, losing a parent can still have a major effect, regardless of your age when it occurs.

Many of my clients are responsible for the care of aging parents. They spend numerous hours each week attending medical appointments, coordinating caregivers and medical providers, and wrestling with insurance and legal paperwork. Not to mention those of you who may find yourself spending time with an aging parent who no longer knows who you are. Some of us expect to feel relieved when we no longer have these responsibilities and are blindsided by the depth of the empty hole left by the passing of a parent. For others, the shock comes from feeling like an orphan. Realizing the person who loved you from the day you were born is gone, and with it, the generational layer between you and your own death can be overwhelming.

Grief can be very powerful. For example, I recently invited longtime friends to a James Taylor concert for old times’ sake. My friend, who recently became an orphan, declined the invitation stating that from now on, he was no longer interested in James Taylor or any other concerts.

Here are four things to do when faced with this kind of loss:

1. Acknowledge that it is a big deal.

Grief is grief, even if your parent is 100, even if you are 75. For most people, the death of their final parent hits them hardest. When your first parent dies, you are often focused on taking care of your living parent. When your final parent dies, there are fewer distractions and responsibilities. You have easier access to your own feelings. Give yourself the time that you need to grieve. Try not to minimize the loss.

2. Recognize that you have lost more than your relationship with your parent.

You have not only lost the role of child, but also that of caretaker. Remember when your kids left home and you were no longer responsible and involved in their day-to-day lives? Remember the soccer parents and your kid’s friends that you missed when the kids left? Well, you may miss the caretakers that you spoke to regularly. You will no longer hear about their families. What about the other residents at your parent’s apartment building/assisted living or nursing home? These people were a part of your life and losing them can be tough.

3. Reach out to others in the same situation.

There is nothing more powerful than the sense of being part of a community where we feel understood. Reach out to others who have recently lost a second parent. Tell them why you are reaching out and ask to meet for coffee. Those already in “the club” are usually happy to connect with you. The person you reach out to does not have to be a close friend or confidante. In fact, casual friends can often be more understanding and helpful in these situations.

4. Use the tools you used when you became an empty nester.

How did you handle your transition to the empty nest? What worked for you? Did you take time to let the dust settle or did you jump into making new connections? Some new orphans (there must be a better word for this) feel a greater need to get involved in something more meaningful. Some redeploy the skills they developed caring for their parents to become patient care advocates, drive the elderly to medical appointments or volunteer at elder care communities. Others enjoy the freedom to take care of themselves and enjoy spending more time with friends and having fun.

Whatever you do, make sure you do what feels right to you.

Barbara Wasserman, LICSW is a psychotherapist and life transition coach who empowers midlife women to make their next years their best years. Do you want to create a more meaningful life.? Check out My Next Purpose.

Barbara Wasserman, LICSW: Psychotherapist and Life Transition Coach; is the owner of Barbara Wasserman Coaching and a partner at Counseling Collaborative. Barbara created and leads the "Beyond The Empty Nest" and "Moving Beyond Divorce" Workshop series and coaches busy people navigating transitions in their lives to make the rest of their lives the best of their lives. Barbara is a speaker on Empty Nesting and Life Transitions and her work has been featured in the Huffington Post and BetterAfter50.com. Barbara is married and has launched her three daughters ages 27, 24 and 20.

Barbara Wasserman, LICSW: Psychotherapist and Life Transition Coach; is the owner of Barbara Wasserman Coaching and a partner at Counseling Collaborative. Barbara created and leads the "Beyond The Empty Nest" and "Moving Beyond Divorce" Workshop series and coaches busy people navigating transitions in their lives to make the rest of their lives the best of their lives. Barbara is a speaker on Empty Nesting and Life Transitions and her work has been featured in the Huffington Post and BetterAfter50.com. Barbara is married and has launched her three daughters ages 27, 24 and 20.

This is such good word. Sharing it on the MySideof50 FB page today!

Lost both of my parents within 7 months of each other last year. You are right, after Mom died, there was little time for grief because Dad needed so much. Kind of crashed & burned after dad died. I was so tired. Grief just comes up unexpectedly at times.

This touched a nerve for me because I have parents in their late 80s and I am acutely aware that time is running out. I know I am very lucky to have had them this long and that my children grew into adulthood without losing their grandparents - but that does not stop me from thinking of the loss to come (if I outlive them of course!). Having reached my own mature years (60) without losing them, it scares me to contemplate a life without them. It must have been horrendous losing yours at such a critical point in your lives - and what a loss for your children. You do give some good advice here and I am sure it will echo back to me when I need it the most - although I have to say I didn't cope with the empty nest that well!

I, too, lost my parents at a young age and I sincerely appreciated your tips on helping people through their grief. One of the things I believe is so important is to ask questions about the deceased one's life and allow them to share the good and fun times.

Lisa writes regularly over at TweeniorMoments. This post was originally featured there. Remember back in your teens, when you’d sleep...