The Library is celebrating the Sixties (which, you know, makes sense for LBJ), and wow!  Talk about Boomer heaven–I was mesmerized! 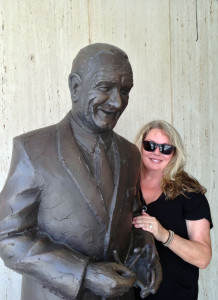 Me with the larger-than-life LBJ

I am more of a 70s boomer, but seeing all of the 60s paraphernalia and magazine covers and album covers and TV show debuts was just incredible. Maybe I remember more than I thought I did….or maybe I’ve just seen some of these things so much I think I remember them.  However, I did see some things that absolutely came from my memory banks:

–a commercial with a rabbit who tries to eat Trix!  Ah, Silly Rabbit, Trix are for Kids!

–Lawrence Welk and his orchestra, with bubbles, doing the Pennsylvania Polka.

–Barbie and Ken original dolls! I remember them because my older friend Holly had them, and I thought they were so cool!

–Did you know Hugh Hefner started in the 60s with those stupid pajamas?

There were more serious moments in the library.  The assassination of JFK, MLK, and RFK.  The 1968 Democratic Convention debacle in Chicago.  The Chicago 7 trial.  Civil rights. I listened to the phone call between J. Edgar Hoover and Lyndon Johnson, when Hoover called to advise the President they had found the car of the missing civil rights workers, burned.  It gave me chills. 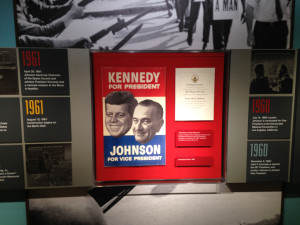 A poster from the Kennedy presidential campaign

We tend to think of President Johnson as synonymous with the war in Vietnam (you know, “hey hey LBJ how many kids did you kill today?), but throughout the library are reminders of Johnson’s dream and goal, The Great Society.

It seems unbelievable now, but in 1963, 25% of adult Americans did NOT have a high school diploma; 20% of Americans lived in poverty; and 33% of the elderly population lived in poverty.  The two main aims of the Great Society were the elimination of poverty (War on Poverty) and racial equality. 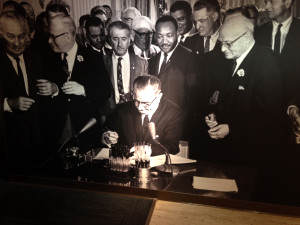 Johnson passed four Civil Rights bills and others that were important, too:

It is said that Johnson could twist the arm of any lawmaker.  He wasn’t subtle.  They called it “the Johnson treatment”.  Did you know LBJ was 6’4″?  He towered over people, and was extremely intimidating.  He was a wheelin’ and dealin’ Texan, and he didn’t take no for an answer. 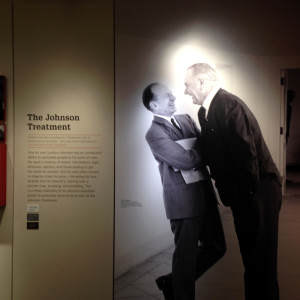 What brought Johnson’s presidency to an ignoble end was the escalation and disaster of the war in Vietnam.  The escalation of the war intensified the war protests, and Johnson announced that he would not seek, nor accept, the nomination of the Democratic Party for President in the election of 1968.  Bobby Kennedy was running for the Democratic nomination on a promise to end the war, and if he had not been killed in June 1968, he would have been the nominee.  Nixon, of course, won the 1968 election.

Seeing the library, hearing conversations that LBJ had with Jackie Kennedy, MLK, and J. Edgar Hoover was a remarkable experience.  I would love to go back, and spend the entire day, looking carefully at everything, and listening to every conversation available to visitors.

Floors 5-9 are archives, filled with the documents of the times.  The library is nothing short of fascinating.  I highly recommend a visit.  The 60s were iconic times, turbulent times, tragic times, violent times, and a time of “love and peace”.  I wish I could remember more of it, but seeing it in the library was astonishing.  I’m very happy I made the trip.

If you enjoyed reading about this trip to the Lyndon Baines Johnson Presidential Library, read more from Tam Warner Minton on her blog, Travels With Tam

I can't wait to visit more of them!

I've always thought visiting a Presidential Library would be fascinating, but I've never been. Thanks for sharing!

Have I Turned Into a Grandma?

My kids have not had children—yet, but recently I have noticed the definite signs of Grandmother-dom. Kids have flown the...