This essay originally appeared on Catharsis but has been updated for this publication.

It would have been the perfect weekend getaway. We were less than four hours away from home and in the heart of an interesting, diverse city. The drive was stress-free, everyone was in a good mood and our hotel room was perfect. 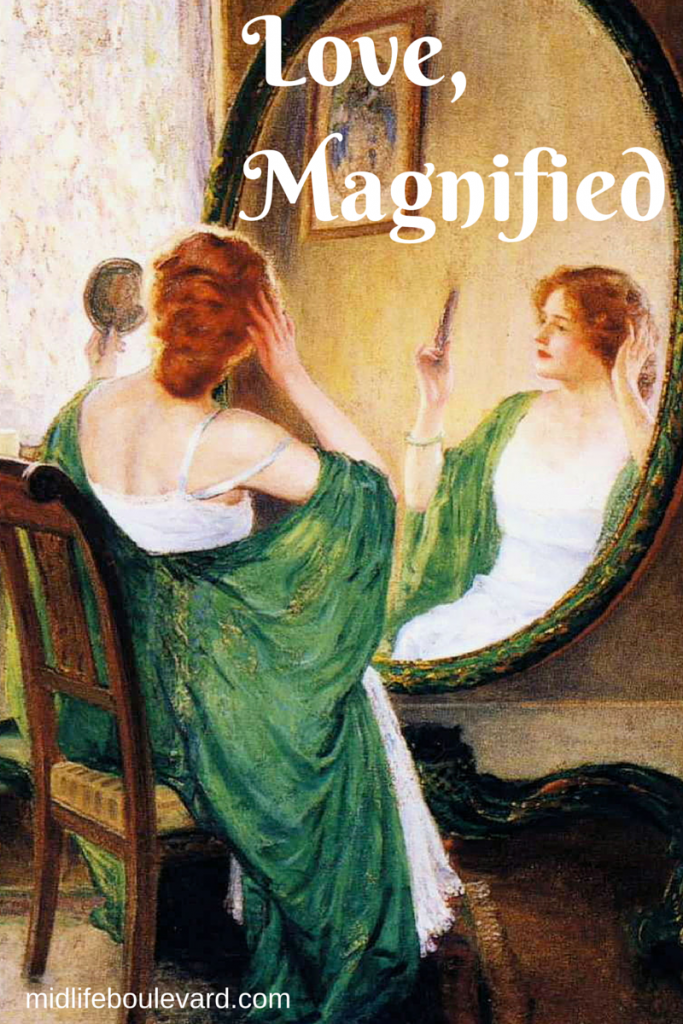 I was in total bliss until I entered the bathroom and discovered the meanest gadget ever created: the magnifying mirror.

These things are ruthless! At first I was happy to see that the bathroom had it. It was just there, quietly and innocently hanging on the wall, to the side of the bathroom sink. My mistake was that I let myself be tempted by it. It was dangling there like the evil Biblical snake, luring me to come closer. I was powerless against it and the seduction was just too much for me to resist.

I felt I had no choice but to give in.

Closer and closer I went. At first I thought it wasn’t so bad. But see that’s the thing—it makes you think that way in the beginning so that you don’t stop and instead, keep scrutinizing. Then you reach the point of no return. Or at least I did.

Without being fully aware of it, I found myself tilting my head side to side, and then up and down I went. Pores and age spots I’d never seen before were glaring back at me. Even worse—and yes there was something worse—hairs on my face that never bothered me before suddenly caused me unspeakable trepidation! I got so disgusted with my reflection that after a few minutes I began doubting if I was really female and thought that perhaps it IS time for some hormone replacement, correction or whatever! It was a good thing I still had enough sense in me to simply step away, and force myself to calm down rather than reach for either the tweezers or the razor!

All I could muster to say to myself as a sigh of relief was this: Thank God I’m not a celebrity! How horrible it must be to feel so much pressure to be perfect and flawless!

Authentic intimacy is to not fear the closing in of distance because you feel safe with each other. There is a feeling of acceptance and appreciation. Isn’t it true that as we become extremely close to something, our vision becomes more blurred and we get to a point where we don’t see so well anymore? It’s because at that distance, with that closeness, we no longer see the senseless details so much. With that closeness, perhaps we don’t need to see with our eyes anymore but with our hearts. What we see doesn’t have much weight anymore when weighed against what we feel. The little flaws, the misplaced spots and hairs and annoyances don’t really matter as much because what the heart sees is so much more true and enduring.

Intimacy is definitely not for the fainthearted and not everyone is entitled to it. A lot of things we are not comfortable with, things we even reject about ourselves get exposed when intimacy is present. This is why intimacy takes time and a lot of effort. It is earned and should never be wasted once achieved.

You need a whole lot of self-love and complete acceptance to be able to look at every inch of your face in a magnifying mirror without being defeated by it. I feel this to be even truer now that I’m older, more mature, and I see that the glow of youth has begun to fade somehow. And it sure requires even more love and genuine intimacy to allow someone else to be that close to you and have everything exposed. But there is really nothing to fear. To see others and our selves through love’s eyes does not demand perfection. The truth is, the beauty of being in love’s presence is that it really only magnifies that which makes us most genuinely beautiful.

Joy Page Manuel is a blogger, stay-at-home mom and full-time over-analyzer. She was born and raised in the Philippines, but is now living in Tennessee. She served as professor of Sociology in university for 7 years prior to her 2004 migration to the U.S. In that past life, she was also a contributing author to three academic publications in the Philippines. Her blog was voted VoiceBoks Top Mom Blog of 2013. She also has several featured member posts at Blogher and also blogs at the Huffington Post. Joy writes about all her angst as a mother, migrant and hopeless romantic on her site Catharsis.

Thanks Susan, glad you loved it! And happy to know I'm not the only one who thinks those are evil ;-))

I loved this Joy - and yes, those mirrors are the devil!!